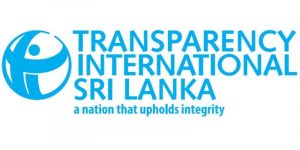 The Global Corruption Barometer is the world’s largest public opinion survey on views and experiences of corruption.

As a poll of the general public it provides an indicator as to how corruption is affecting individuals on a national level and how efforts to curb corruption are viewed on the ground.

TISL Executive Director Asoka Obeyesekere said, “These findings provide key opportunities for the state to refocus its efforts to combat corruption. The government and the police should also strive to foster greater trust in themselves. The alarming prevalence of sexual bribery must also be directly addressed, especially given the multiple challenges in supporting victims”.

Obeyesekere added, “It is clear from these findings that as the main anti-corruption agency in the country, CIABOC must strengthen and expedite the implementation of its ambitious 2-year National Action Plan. Whilst it is encouraging that the public is overwhelmingly aware of the Bribery Commission, the lack of awareness on the existence of a mechanism to report corruption underscores the challenges in fighting corruption”.

He concluded, “Whilst the government must adopt a zero-tolerance policy towards corruption, the fact that a quarter of the public find it acceptable to pay a bribe to obtain certain services, illustrates a public indifference to the consequences for engaging in corruption. Whilst stronger enforcement of the law could address this indifference to an extent, there must be an honest review of the resources and skills required to effectively fight corruption – and the government should allocate resources accordingly – in light of President Rajapaksa’s manifesto commitment to fight corruption”.

The GCB 2019 Sri Lanka report published by TISL is a summary report of a survey conducted in all 9 provinces in the first quarter of 2019. The survey incorporates a stratified sample of 1,300 citizens aged 18-80 years, from urban and rural settings.

Hands off the peaceful protests

April 17, 2022 byNews Admin No Comments
Protests against the Government and President Gotabaya Rajapaska, being staged in the Galle Face area, completed their ninth day yesterday (17), and the protesters have vowed to continue the protests