September 27, 2019 by The Sunday Morning No Comments

Know any Sri Lankan who has not been proud of the gems of the land that adorn the British Crown? The world talked about the Sri Lankan blue sapphire in a wedding ring that was passed on from Princess Diana to the Duchess of Cambridge. Sri Lanka is rightly named Emerald Island, but as much as the islanders pride themselves of exquisite gems, do they know the price of a gem?

A voyage into tradition, history, and culture

Gems are a treasure from the earth. It is a gift of time, a gift that is preserved and moulded, sometimes over millions of years. It is an industry that rewards you a thousand times more than what you invest. It is also a trade where hard work is indispensable and a rare trade in which luck sometimes beats hard work. The earth sometimes charms gem miners by duly granting them what they deserve and at other times, choosing to spoil them to bits or exploit them to bankruptcy.

The rich culture, tradition, smiles, and tears of gem miners do not come to the surface very often, although gems do, and just as much as the topic of gems is worth exploring, so are the miners. 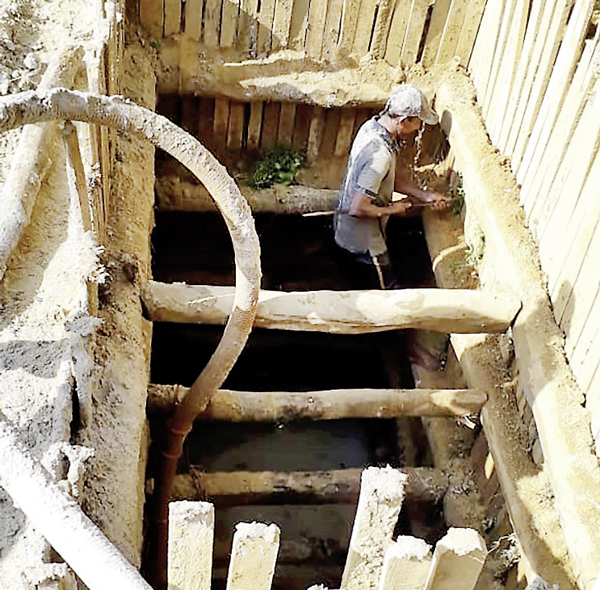 A passion and the only passion

K.A. Seneviratne is 65 years old. He has 40 years of experience in the mines and currently is the Head Bass in a mine in Getahetta. “I have inherited this noble vocation,” said the gentle, soft-speaking Seneviratne, who corrected me when I referred to mining as a business. “This is all we know and we know it best. All my forefathers were miners. We are vegetarians, we kill no animals. It is with the Earth that we are together. We respect her. And in turn, she has never turned her back to us,” the loyal worker who puts in 10 hours of laborious work in a cold, dark, wet, dangerous mine said with much happiness.

“We have no identity card. The Government issued an identity card in 2007 which expired in 2012. There is no title, no social recognition. Wherever we go, we are degradingly known as ‘pathal karayo’ (men in the mines). But only we know what a fulfilling relationship we have with Earth. True, we are poor, but no complaints so far.”

“There was a time every man and any man in this village could have a mine,” said Varuna, who is the Kumatheru of a well-to-do gem mine. Kumatheru is a term used in the field. It is a post held by the agent of the mine owner. He is most trustworthy to the owner and oversees all functions at the mine, mostly ensuring no one cheats or steals stones. “It is like working in the Treasury,” said Varuna proudly, adding: “One stone could mean billions of rupees.”

Traditional gem mining is seeing an end with the introduction of regulated permits and new technology. To obtain a permit, one needs to have legal ownership or possession of the land, which is not something that every man can easily have. Traditional technology was people-based with the use of equipment obtained from nature.

But latest technologies can excavate the unknown areas that were not traditionally unearthed, and increased competition has made this a business only for the rich.

Sajith Masilamani is a lecturer at his own professional gemology academy where he teaches 120 students how to identify 120 types of stones in five days. Apart from the immemorial ancestral knowledge from his forefathers, Sajith has qualified himself as a legal technical gemologist after being trained at the Gem and Jewellery Refresh and Training Institute (GJRTI).

He is fluent in English and global current affairs and keenly contributes to environmental preservation. When asked why he does not own a mine, Sajith answered that he cannot afford it. Likewise, there are experts and courses from official channels such as Sri Lankan universities as well as on less mainstream institutes on gemology and mineralogy, with expertise taught on diverse subjects such as colour grading, gem cutting, heat treatment, fashioning of gem stones, carving, fashion jewellery, etc.

Environmental damage caused by mining is a hot topic, but what are the facts? Traditional mines, which are currently illegal mines by miners with a rare age-old sure-knack for “where gems lie”, use hardly any heavy machinery. Given the fact that the miners know where to mine, such mining does not attack the deep earth bed, at least at most times.

In contrast to the licensed mines that go on mining deeper and deeper, perhaps for months and years till gems are found, these traditional mines cause almost zero after-effects to the environment. These small mines can be closed easily, and tend to close by themselves given the limited and shallow mining that takes place within. On the contrary, a licensed mine might use the license as an excuse to dig deeper into what mother earth may not want unravelled.

Gem mining risks the life of the miner to a great extent. Imagine yourself under the earth for a whole day, for years on end. It is not underground luxury, rather perpetually getting wet with the water dripping from the earth above you, and water flowing on the earth at your feet; mud water in the dark cold mines. Oxygen is scarce. Oxygen tubes that need to be used in such situations are also scarce. They do not walk underground, but crawl underground. Space made is just enough to creep through. You know that the earth above you is in a delicate volatile state and can fall on your head anytime – that it can fall on your head anytime and bury you alive!
The situation is riskier in unlicensed mines, which are the majority. The lack of a monitoring mechanism and poverty-driven desperation to find a gem ensures that heavier risks are taken. The reward could occasionally be a gem. But more often than not, it is serious injury or even death.

How are the miners compensated for the risk they take? Through a monthly salary? No. Daily wages? No. Commission? Yes. And what is the commission? It ranges from 30-40% of the net profit as per mine owner Ranji, who has made his fortune diving for gems in the rivers of Kelani, Seethawaka, Kalu, and Ve, over a span of three decades. When asked why he does not dive in the rivers any more, he said that gems are not found in the rivers anymore, and though it is a hard business, mining is the only option left.

The commission is from the net profit. It is to be divided among the dozens of miners in one mine. Yes, there are times that a handsome reward is yours, but very much the opposite when no gems are found, which could stretch out for years.

“Well then, it is just your food and basic expenses you need to cover. We wait for the day that a gem comes out. One day it will, wouldn’t it?” Sena, a father of four children, asked hopefully.

Sena was the Head Bass in a mine for years and joined the present mine as a bass. “That mine closed. We did not find gems, so our boss did not renew the license. I have done this all my life, just like my father and grandfather. I accept what comes.”

As it is time-consuming to generate gems from the earth, gem miners face cut-throat competition. Powerful merchants operate an oligopoly in obtaining licenses. The story is not very different in the sale of gems either. There are situations in which a middle-level merchant is allowed to buy land, only to consequently pay the price by selling the gems he mines only to the top-level merchant who favoured the miner purchasing the land. Some of the illegal gem mines are protected by the mafia, who pay the penalty when caught in the net of the law.

Most of the miners suffer from knee and spine problems due to bearing heavy weights. Long hours of standing coupled with the exposure to not-so-pleasant underground conditions make them patients of neurological and dermatological diseases.

There is a 10% tax imposed by the Customs Department when a rough stone is brought in and out of the country, even for exhibition purpose. That makes 20% for one exhibition. This drastically cuts into profits.

Let us ask the questions

The gem industry draws a massive income into the country. Is it fair that workers in such an industry have no identification cards? Could some measures be taken to make them feel valued? Could the long hours be broken down to include rest periods in order to prevent occupational diseases?

There is no doubt that legal possession of land is vital when obtaining a license, but can the traditional miners who, instead of a license, possess rich knowledge in the field be provided with an alternative to use their skills?

Tax regulations are imposed on the merchants, but is it not the grassroots bass worker who is finally affected even by policy decisions? How about the illegal gem mines that survive at the mercy of the mafia? What about the rich traditional knowledge they possess? Is it not exploited and given an under-estimated value? Furthermore, how about the technical experts such as Sajith, who not only carry rich heritage but also modern expertise and skill? Are they valued and preserved?

Much to know, much to do

Next time, when we admire and pride ourselves as a country where world-famous gem stones are found, let us not only look at the lustre. Let us see the sweat, tears, and dreams of those who crawl for years on end toward a dream that may never come true. Every gem has a story of severe back pains, serious accidents, daily fatigue, and hunger. The least we can do is be sensitive towards that.

March 22, 2021 byNews Admin No Comments
In honour of International Women’s Day, WEConnect International, a non-profit that helps women-owned businesses compete in the global marketplace by connecting them with large organisations that can b

How to build an online food business