Swimming with the Sri Lankan shark

November 7, 2021 by Naveed Rozais No Comments

Sharks are fascinating creatures, and not simply because of their pull as the ferocious predators we see in most mainstream movies. With fossil records dating back 400 million years, sharks have outlived dinosaurs and many other forms of life currently on Earth. 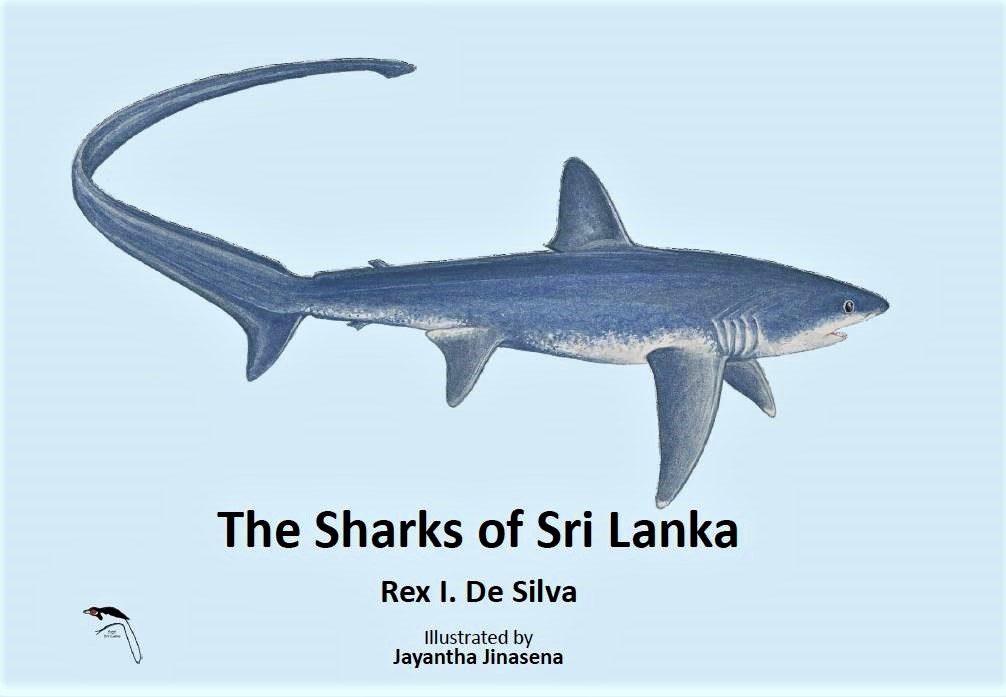 The cover of ‘The Sharks of Sri Lanka’

Sharks are very interesting biologically as well. For one thing, they have no bones. They are a special type of fish known as “elasmobranchs”, which translates into fish whose skeletons are made of cartilaginous tissues – the same kind of tissue that our ears and nose septum are made of. This category also includes rays, sawfish, and skates. Their cartilaginous skeletons are much lighter than true bone, and some species have large livers which are full of low-density oils, both helping them to be buoyant. (Most sharks do not have large livers and hence are negatively buoyant. These sharks maintain their position in the water column by swimming continuously to obtain dynamic lift, which is provided mainly by the pectoral fins. Should these sharks stop swimming, they would sink to the bottom. The sand tiger shark, on the other hand, can adjust its buoyancy by swallowing air).

They are also mysterious. To date, scientists are still trying to figure out how long sharks live, and have only been able to study the ages of a fraction of shark species. Most notable is the Greenland shark, Earth’s longest-lived vertebrate at 272 years.

While not quite the man-eaters we see in film, sharks are still formidable predators, with mouths lined with multiple rows of individual teeth that fall out and grow back on a routine basis. Their teeth come in all sizes and shapes, from serrated like a razor to triangular like a spear. Although Sri Lanka, in comparison to neighbouring countries, has relatively few recorded shark attacks, both fatal and non-fatal shark attacks have occurred in our waters. 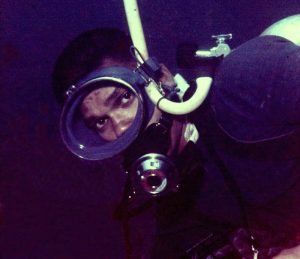 Globally, there are more than 1,000 species of sharks and rays (536 of which are sharks), with 64 species of sharks making their home in Sri Lankan waters. To learn more about sharks in a local context, Brunch reached out to pioneer diver and biologist Rex Ian De Silva. De Silva is one of Sri Lanka’s foremost authorities on Sri Lankan sharks, marine life, seabirds, and shorebirds. He is the author of the 2015 book “The Sharks of Sri Lanka” and in 2013, was declared an “International Legend of Diving”, becoming the first diver from the Indian Ocean to be so honoured. He is also a Linnean Society of London Fellow, the Institute of Biology (Sri Lanka) Member, and a Global Shark Attack File Field Investigator.

Having studied sharks for decades, we asked De Silva what drew him to these enigmatic creatures in the first place. Having been a diver since his youth, De Silva explained that he would frequently come across sharks when he was out diving or spearfishing (this was when spearfishing was still legal). “It is with some regret I admit that I speared a few,” De Silva said, adding that his interest in sharks in their own right began after these frequent encounters with them as a diver. “Most sharks are rather inoffensive, although on one or two occasions, sharks stole speared fish from me. So I never speared a shark after that, but began to study their behaviour, especially their body language and threat postures, which vary slightly from species to species.”

This interest in sharks led to De Silva conducting a detailed study and cataloguing the Sri Lankan species in 1968, adding 22 shark species that had previously not been recorded from Sri Lanka. His study of sharks continues to this day, authoring several research papers on sharks as well as his book “The Sharks of Sri Lanka”. 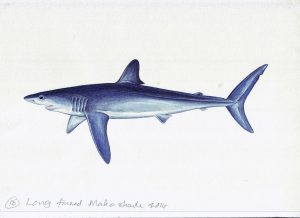 Addressing the biggest misconception surrounding sharks, that they are man-eaters or threats, De Silva said that this is quite simply incorrect. Most sharks are harmless. Although a small minority can be aggressive and dangerous, on occasion, both fatal and non-fatal attacks have occurred in our waters, instances which De Silva has recorded in his book.

Sri Lanka’s marine environment is as diverse as its land-bound environment, and currently counts 64 shark species within its waters, with De Silva sharing that several pelagic species (sharks from the open ocean) migrate into our waters frequently as well, though he noted that there is a lack of hard data in this regard. A few of Sri Lanka’s most common non-migratory sharks (in no particular order) include the whitetip reef shark, tawny nurse shark, three species of bamboo sharks, the zebra shark, and the grey reef shark, to name a few.

Speaking on migratory sharks, he noted: “It is most likely that the prickly shark, the two makos, three threshers, megamouths, whale sharks, four hammerheads, and several others migrate into our waters.” He added: “Most of the reef sharks and several requiem sharks are residents, whereas the status of many other species is presently unknown. My observations suggest that scalloped hammerhead sharks move southwards off the west coast of Sri Lanka during the southwest monsoon. This could be an annual migration which requires further study.”

Addressing a popular misconception on where sharks can be found in Sri Lanka, De Silva said that you don’t always need to visit coral reefs to see sharks. “On the west coast of Sri Lanka, many (but not all) sharks, including some reef species, retire to the offshore mud banks (muday) during the daylight hours and return to the reefs at dusk, where they go about their business until early morning, after which many return to the banks,” he explained, adding: “Many pelagic species, Spanish mackerel, wahoo, jacks, and other prey species also frequent the area, sometimes in large schools. I speculate that it is these schools that could attract the sharks to the banks. However, fishing activities on the reefs, dynamiting, etc., will often bring them racing back to the reefs.” 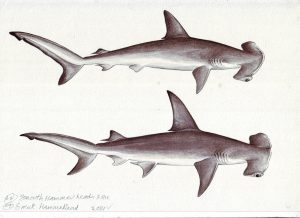 Speaking on one of the more challenging parts of his field of interest, De Silva explained that, in general, identifying sharks is not as easy as people imagine, especially on the basis of photographs alone.

“An excerpt from a short note, written by me, explains this,” De Silva noted. The excerpt is as follows:

“I post this as a caution, as I occasionally see very speculative identifications of sharks on the internet. Several years ago, I examined a large shark that had been caught a few miles off Mirissa. I inspected the fish in detail but was unable to identify it. I later showed my sketches and notes to Sri Lanka’s diving legend Rodney Jonklaas, who almost immediately identified it as a blacktip shark Carcharhinus limbatus (not to be confused with the smaller reef blacktip shark C. melanopterus). This puzzled me, as the shark’s fins were plain without the characteristic black tips to the fins. Rodney explained that in some sharks, the black fin markings fade away when they grow old/large, making identification confusing.

“To expand on this difficulty, I present another (hypothetical) example. Let us say that I recently saw an image of a rather stout shark which raised the question: ‘Is this a bull shark?’ However, flank stripes were not visible.

“So is this a bad photograph of a bull shark?

“Or, is it a good photograph of some other shark species?

“Or does it show an aberrant bull shark which lacks flank stripes?

“The moral of this is do not confirm the identity of an unidentified shark until you have seen its teeth.” 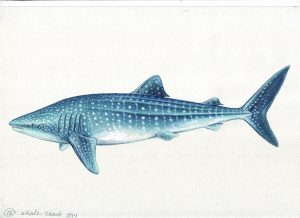 There are, of course, a few species that are so distinctive that they are easily identified, like, for example, the tiger shark, the whitetip reef shark, and the blacktip reef shark. In general, De Silva shared, it is a combination of distinguishing features that help scientists identify shark species, adding that his book goes into some detail on some of the diagnostic keys that aid identification.

The sharks in our waters are under significant threat, however. Earlier this month, there were reports of illegal shark fishing taking place from within Pigeon Island National Park, a marine protected area, where fishing is prohibited. Declining to comment on the Pigeon Island incident because he is not in possession of all the facts, De Silva did note that sharks face a significant threat globally from overfishing, with an estimated 100 million sharks being caught each year.

“Sharks are heavily hunted,” De Silva explained, adding: “It is difficult to know to what extent, as many sharks which are seen in our fisheries harbours are caught outside the island’s waters. In addition to being targeted, sharks are also often captured in large numbers as bycatch in fisheries that target other species like skipjack, tuna, etc. There is a lucrative market for shark fins. However, the practice of ‘finning’ (cutting off a shark’s fin and throwing the live shark back into the ocean) is now prohibited by Sri Lankan laws but, I am informed, it goes on surreptitiously.”

According to National Geographic, an estimated 100 million sharks are killed each year, mostly to supply demand for an expensive Chinese dish called shark fin soup. A drop in numbers is bad news for sharks but also for ocean health in general: As top predators of the ocean, sharks are critical for ensuring a balanced food web.

Locally, shark meat is an inexpensive source of protein, hence it is consumed by many, and is also often an ingredient in our signature fish buns (malu paan). In fact, De Silva explained that Sri Lanka is considered to be one of the 20 leading shark fishing centres in the world. “In my opinion, the intensity of shark fishing has remained more or less constant over the past few years.” 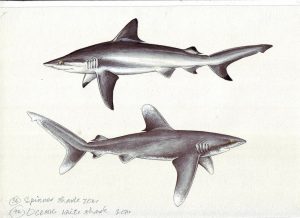 In addition to overfishing, rising water temperatures and coastal development are also contributing to shrinking shark populations worldwide, with the mangroves and coral reefs that sharks use for breeding and hunting coming under threat.

Commenting on steps that can be taken with the conservation of Sri Lanka’s sharks, when it comes to overfishing, De Silva said that Sri Lanka’s laws are, in general, usually adequate. However, he said: “The need of the hour is that these laws need to be more rigorously enforced. The most threatened family of sharks are the thresher sharks, which are protected by law in Sri Lanka. Unfortunately, these thresher shark laws have ambiguities that need to be addressed, as these laws are being openly flouted.”

Sharing his thoughts on other measures that could be taken to strengthen conservation measures, De Silva recommended the expansion of marine protected areas and research to determine which species are at threat so that suitable legislation could be introduced for protection of these species, revision of laws relating to fishing gear to ensure that the gear used does minimum damage to non-target species and the environment, and improved mechanisms to ensure that laws are very rigorously enforced.

De Silva also shared his personal views on conservation, not solely when it comes to sharks, but in general, saying: “Conservation must be driven by knowledge and data. Emotions and sentiment should have no place in conservation policies.”

The paintings of the sharks (including the book cover) are by Jayantha Jinasena and appear in the book “The Sharks of Sri Lanka”. They are reproduced here with permission from the publisher, the Field Ornithology Group of Sri Lanka (FOGSL) of the University of Colombo.

May 12, 2021 byNews Admin No Comments
Soapy Island allows a maximum of 20 players to enter the court, however, at a rate of Rs. 450 per person, there is a minimum charge. Even if you have a smaller group, you must pay the base charge for