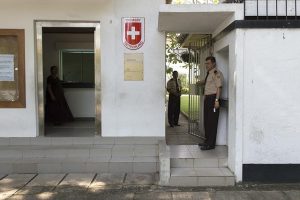 A local employee of the Swiss embassy in Sri Lanka has been temporarily kidnapped and threatened by unknown assailants in what the foreign ministry has called a “serious and unacceptable attack”, a Swiss news agency, ‘swissinfo’ reported yesterday.

According to the Sri Lanka news website lankanewsweb.net, the woman was kidnapped on Monday then held and questioned for two hours before being released.

On Wednesday, the Swiss foreign ministry confirmed the incident and told swissinfo.ch in a written statement that the woman was threatened in order to force her to disclose “embassy-related information”.

“Switzerland promptly reported the incident to the Sri Lankan authorities and is demanding an immediate and complete investigation into the circumstances surrounding the incident,” wrote ministry spokesman Pierre-Alain Eltschinger.

The Sri Lankan ambassador to Switzerland has also been summoned to the foreign ministry in Bern, he added.

The foreign ministry did not say what the perpetrators were looking for. lankanewsweb.net reported that the attack was in connection with a high-ranking Sri Lankan police inspector who – according to a report in the Neue Zürcher Zeitungexternal link – has fled to Switzerland due to death threats.

According to the NZZ, the inspector had been investigating corruption and rights violations in connection with the entourage of newly-elected President Gotabaya Rajapaksa. He left Sri Lanka on Sunday, the newspaper reported, and has requested asylum in Switzerland.

The State Secretariat for Migration did not respond to a request by the Keystone news agency to confirm this, citing the protection of personal privacy for individuals.

March 4, 2021 byMihi Perera No Comments
The Government has made plans to establish a factory to manufacture sailing vessels for the promotion of the tourism industry, said State Minister Jayantha Samaraweera today.

September 15, 2020 bythemorningeditor1 liberty No Comments
Labour Minister Nimal Siripala de Silva rejected a request made by employers to extend the date granted for them to pay half-salaries or Rs. 14,500 till 31 December.