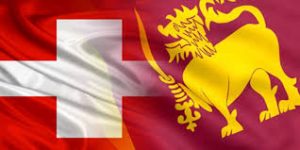 The Embassy of Switzerland in Sri Lanka has conveyed its intentions to resume positive cooperation with Sri Lanka.

The Swiss Embassy has expressed these views through a Diplomatic Note addressed to the Ministry of Foreign Relations of Sri Lanka yesterday(30).

“Switzerland and Sri Lanka have maintained excellent relations for decades, and have engaged in substantial cooperation in a variety of fields, to the benefit of both countries and their populations. Both countries value these relations greatly,” Diplomatic Note read.

“In the last few weeks, this relationship was marred by misunderstandings surrounding an incident involving a local staff member of the Embassy, who was subsequently taken into custody by the Sri Lankan authorities. In this context, uncorroborated facts made it into the public domain, putting an unnecessary strain on the otherwise cordial relationship between the two countries.”

“At no point during this time did Switzerland have the intention of tarnishing the image of the government of Sri Lanka.”

“The Embassy regrets that these developments have led to the Sri Lankan authorities’ commitment to due process being called into question and reaffirms that Switzerland, like Sri Lanka, is committed to upholding good governance and the rule of law.”

“The Embassy hopes for a swift return to an environment conducive to resuming the positive cooperation between Switzerland and Sri Lanka. Recognizing that local staff is subject to local laws, the Embassy is convinced that both sides will remain attentive to the working conditions and the well-being of all staff of diplomatic missions. Switzerland recalls that it is
the responsibility of any government to protect the diplomatic missions of other states on its territory.”

“Attaching great importance to its relationship with Sri Lanka, committed to maintaining and to further strengthening these relations in a constructive manner, and convinced that both countries will together continue to build relations which are based on mutual respect, the Embassy of Switzerland in Colombo avails itself of this opportunity to renew to the Ministry of Foreign Affairs of the Democratic Socialist Republic of Sri Lanka the assurances of its highest consideration.”

April 19, 2019 byRandev No Comments
An order delivered by Supreme Court yesterday (18) has made it clear that state institutions must be more considerate in their access and services available to the differently abled individuals.

November 18, 2020 byMihi Perera No Comments
Acting IGP Chandana Wickramaratne has informed the Attorney General that a team of senior officers of the CID has been appointed to investigate the Brandix COVID-19 cluster.