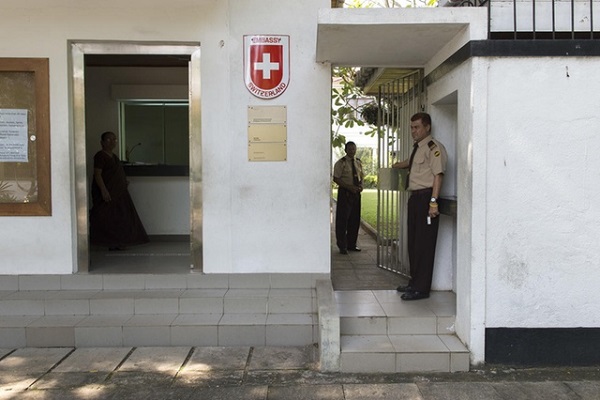 Switzerland has demanded security guarantees for its employees in Colombo after one of its staff members was allegedly kidnapped and questioned over a CID investigator who had fled to Switzerland after the presidential election.

Swiss Foreign Ministry Spokesman Pierre-Alain Eltschinger told The Sunday Morning that the Swiss Ambassador to Sri Lanka Hanspeter Mock had raised concerns over the incident with Prime Minister Mahinda Rajapaksa and Foreign Minister Dinesh Gunawardena together with a diplomatic démarche.

He said that the incident was “serious” and “unacceptable” as a result of which the Sri Lankan Ambassador to Switzerland had been summoned to the Federal Department of Foreign Affairs (FDFA), Switzerland’s Foreign Ministry, to discuss the matter.

“We can confirm that a local employee of the embassy was detained against her will on the street and threatened at length by unidentified men in order to force her to disclose embassy-related information. Switzerland regards this incident as a very serious and unacceptable attack on one of its diplomatic representations and its employees,” Pierre-Alain Eltschinger said.

The Spokesperson said that Switzerland promptly reported the incident to the Sri Lankan authorities and is demanding an immediate and complete investigation into the circumstances surrounding the incident. It also calls for the perpetrators to be brought to justice and for the guarantee of the security of the Swiss representation in Colombo and its employees to be fully restored.

“This message was conveyed on 27 November 2019 by the Swiss Ambassador to Sri Lanka to Prime Minister Mahinda Rajapaksa and Foreign Minister Dinesh Gunawardena together with a diplomatic démarche,” the Spokesperson said.

The Foreign Ministry, on Thursday, had said that Sri Lanka’s Ambassador to Germany, who is concurrently accredited to Switzerland, Eng. Karunasena Hettiarachchi was to meet with the Swiss authorities to provide an update on the investigation.

The Foreign Ministry said that the Government of Sri Lanka has reaffirmed unequivocally its commitment to give effect to the obligations undertaken as a State Party to the Vienna Convention on Diplomatic Relations (1961), to facilitate the smooth functioning of diplomatic missions in Sri Lanka.

Meanwhile, the Police said that it had commenced a comprehensive investigation into the incident.

The Police Media Unit, on Friday night, said that it had obtained information from the Swiss Embassy related to the kidnapping.
The Police said that the CID and the Police CCTV Division were involved in the investigations.

The Police also said that attempts are being made to mislead the investigations with claims that the CID was involved in the kidnapping.
The Swiss Embassy in Colombo said that the victim was unable to testify after the incident owing to poor health.

Prime Minister Mahinda Rajapaksa had said on Thursday (28) that the Swiss Embassy had not lodged a complaint over the incident by then.
However, the Embassy said that soon after the kidnapping on 25 November, a formal complaint had been lodged.

Bus plans, timetables to be revised for inter-provincial travel

October 26, 2021 byAazam Ameen No Comments
The State Ministry of Vehicle Regulation, Bus Transport Services and Train Compartments, and Motor Car Industry has said that plans and timetables for inter-provincial buses will have to be revised, a

November 7, 2021 byRuwani Fonseka No Comments
The Government granted millions of rupees in tax reliefs for millionaires to live luxuries lives, whereas deductions are made from pensioners in the name of the Agraha Insurance scheme, said Samagi Ja