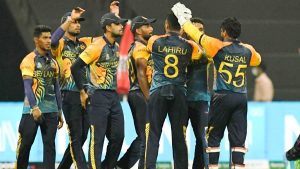 Sri Lanka will be the favourite for today’s encounter against strong Ireland. Photos ICC

Kicking off their International Cricket Council (ICC) Men’s T20 World Cup campaigns with seven-wicket wins, Sri Lanka and Ireland look to seal their spot in the next round today (20) at 7.30 p.m. Sri Lanka time.

Ireland and Sri Lanka enter the Group ‘A’ contest after fashioning similar wins in their opening fixtures against Netherlands and Namibia respectively. Both teams chased down a relatively low total with consummate ease after their bowlers put on a fine display in dismantling their opponents, says ICC on its match previews.

If Sri Lanka win they will all but secure qualification in the next stage, with four points from two games in addition to having already secured a healthy run rate after a big win on the opening day. Even a narrow loss in their last fixture against the Netherlands could still see them go through.

If Ireland, win they too might have one foot in the next round and could even derail Sri Lanka’s chances of qualifying as it would then mean the Lankans would have to win their final game and not embroil themselves in the mess of net run-rate. Ireland’s seven-wicket win against Netherlands came with 29 balls to spare, giving them a healthy net run rate that should augur well for them going forward. 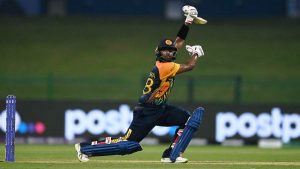 Are Sri Lanka depending too much on Avishka Fernando?

Higher ranked Sri Lanka (10th) might hold the edge going into the encounter but not by much as Ireland (ranked 12th) will be brimming with confidence after their strong showing against the Netherlands on Monday.

Sri Lankan spin duo Maheesh Theekshana and Wanindu Hasaranga shared five wickets between them but not before their fast bowlers – Chamika Karunaratne, Dushmantha Chameera, and later Lahiru Kumara – rattled Namibia’s batters with their raw pace. Their performance only highlighted what coach Mickey Arthur had predicted, labelling the attack as ‘almost ideal’ ahead of the tournament.

Ireland would be confident of their bowling attack as well, especially Curtis Campher, who etched his name in history by taking four wickets in consecutive deliveries, becoming only the third bowler in Men’s T20Is after Lasith Malinga and Rashid Khan to accomplish the feat. He was complimented extremely well by Mark Adair, who finished with excellent figures of 4-0-9-3. Skipper Andy Balbirnie will be hoping for an encore of that performance against Sri Lanka. However, it will be the Irish batters, who will have their task cut out against the quality and the variety of the Sri Lankan bowling unit.

Ireland looks a well-settled team and would not want to tinker too much with a winning combination, while they would be hoping for their star batters at the top of the order – Kevin O’brien and captain Balbirnie -come good in the all-important clash against Sri Lanka.

The only area of concern that creates some conundrum in the Lankan camp is the batting department, where there seems to be a reliance on Avishka Fernando, who will bat at number 4. However, Coach Arthur announced they will stick with the same top three for this match. 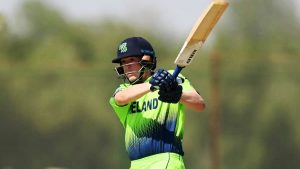 Gareth Delany has been in scintillating form with bat of late

Gareth Delany has been in scintillating form with bat of late.  His unbeaten 88 not out (50) led Ireland to victory against Bangladesh in the warm-up game and in the opener against Netherlands, he put on a superb display of stroke-making as he smashed 44 off 29 balls, helping his team collect their first two points in the competition. He will once again be a threat for the Lankans, who can take the game away from the opposition in little to no time.

Speedstar Chameera, who clocked close to 145 km/h in the opening game, will once again be a player to watch out for. The Irish should be better placed than Namibia to handle such pace but if Chameera can continue to bend his back and consistently land those bouncers on the right spot, he might offer a stern challenge to Ireland batters.

Ever since Campher made his international debut for Ireland, he has been coming up with match-winning performances, either with the bat or the ball. His double hat-trick heroics against the Netherlands makes him the hottest captaincy pick of the match. He has a bowling strike rate of 11.2 and a batting strike rate of 146.6 in 4 T20Is played in the UAE, and will be crucial against Sri Lanka.

All eyes were on Hasaranga in Sri Lanka’s opening game against Namibia but Theekshana stole the limelight after he bagged three wickets with his mystery spin and proved to be the game-changer, both on the pitch as well as for fantasy players. In the match against Ireland, his ability to take wickets at crucial intervals will come in handy as the Irish batsmen might take some time to decode his variations.

Sri Lanka Captain, Dasun Shanaka: “Winning all three games will definitely put us in a good state of mind, adjusting to conditions will help in the main tournament.”

Ireland Captain, Andy Balbirnie: “He (Delany) played a brilliant innings against Bangladesh, and he took his form into the match against Netherlands. He’s doing exactly what we want from him – he’s taking the attack to the bowlers.”

Bangladesh beat Pakistan to set up final against India

September 27, 2018 byRevatha No Comments
Pakistan knocked out of Asia Cup Wednesday night in UAE, by Bangladesh.