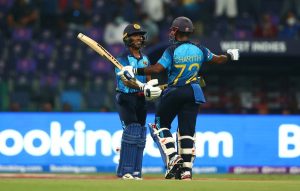 Pathum Nissanka (on left) and Charith Asalanka both got into their fifties yesterday (4). Photo ICC

Sri Lanka beat West Indies by 20 runs in their final game of the Super-12 at the Sheikh Zayed Stadium, Abu Dhabi yesterday (4).

With bat, ball and in the field Sri Lanka completely dominated against West Indies. Pathum Nissanka and Charith Asalanka scored two effortless half centuries while Skipper Dasun Shanaka managed to chip in with the bat for the first time in the tournament, which gave Sri Lanka a big total.

The highlight of the day was their fielding effort which saw Bhanuka Rajapaksa, Dhanajaya De Silva, and Chamika Karunaratne take three brilliant catches.

With this loss, Windies bid adieu to their hopes in the World Cup. Most importantly, Sri Lanka gave themselves a chance going up to No. 8 with the rankings so that they won’t need to play qualifiers before the next World Cup. For that however, West Indies should lose their last game against Australia as well.

West Indies got off to horrible start losing both Chris Gayle and Ewin Lewis in the second over from Binura Fernando. Despite the loss of wickets, Nicholas Pooran came out with intent.

He got lucky twice when Maheesh Theekshana dropped him twice, once off his own bowling. Pooran kept middling the ball to take 52 out of the six overs, but at the other end wickets tumbled.

The chase was getting tough and Pooran had to sacrifice his wicket, trying to get quick runs. Shimron Hetmyer kept the Windies afloat but there was no support from the other end to get them over the line.

SL batters save their best for last

After being asked to bat first, Sri Lankan’s got off to a sensible start in the first couple of overs. There was a lot of pressure on Kusal Perera and he got few runs under the belt, but it wasn’t the most fluent innings from the dashing left hander. However, in form Charith Asalanka and Pathum Nissanka kept the runs flowing through the middle overs. Nissanka reached his third half century of the tournament with a fine boundary. Asalanka too reached his half century, after Nissanka was deceived by a DJ Bravo slower ball. Skipper Dasun Shanaka walked in at No 4 and he was finally able to contribute to the team with the bat. His quick cameo of 24 and Asalanka’s unbeaten 68, helped the Lions post 189.

The Chess Corner by Dulan Edirisinghe: Capablanca, the natural feel for the pieces and small combinations