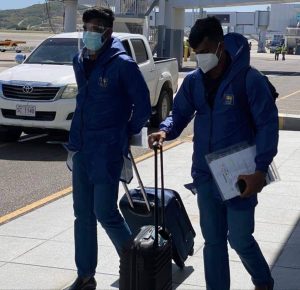 The all-rounder is presently entangled in a USA visa issue for he has allegedly lost one of his passports in 2018 containing USA visa for five years. The US Embassy in Sri Lanka is reportedly inquiring currently whether some other person had entered USA by forging Shanaka’s lost passport.

In his absence, Sri Lanka ODI Captain Dimuth Karunaratne may lead the Lankans in the T20Is starting on Wednesday (3 March). He had shown good form in the T20 practice games held in Sri Lanka before the team’s departure to Antigua this week.

“We were expecting it (Shanaka’s USA visa) to come today (yesterday). Within the next day or two, it may come, but so far nothing,” said de Silva.

Responding when asked who is going to captain Sri Lanka in the T20I if he is unable to reach Antigua and Barbuda in time for the series, de Silva said: “We have spoken to the selectors. We are waiting for a response from them. But we have to look at the current situation. We’ll have to by Monday (1 March) take call”.

Antigua quarantine regulation on arrival is three days. Sri Lanka reached there yesterday (25) and are expected to start training on Monday.

The T20I leg of Sri Lanka versus West Indies series will be held in Antigua on 3 (Wednesday), 5 (Friday), and 7 (Sunday) March before the start of the ODI and Test legs of the series, respectively.

First ever Belt & Road Relay to be run in Sri Lanka

February 6, 2019 byThe Sunday Morning No Comments
Standard Chartered announced the launch of the Standard Chartered Belt & Road Relay, the first-ever global running event spanning the Belt and Road initiative, with the aim of highlighting the Bank’s

January 6, 2021 byRusiru Keppetipola No Comments
If Sri Lanka Cricket (SLC) and the national sports administrative structure, under new Sports Minister Namal Rajapaksa, fail to take note of the result of the South Africa Test series, it may bring..