Take only what you need

November 15, 2020 by Dimithri Wijesinghe No Comments

Govt. relief for those in need: Is the distribution done properly?

With the second wave of Covid-19 hitting us hard, we have been forced to re-evaluate where we stand in terms of our economy. Individually speaking, there are a lot of Sri Lankans struggling simply to keep their head above water, and there are some who have been compelled to check their privilege.

In order to provide for people who are struggling, especially daily wage earners or those reliant on government aid, the Government has taken measures to help families stay afloat by allocating more than Rs. 7.3 billion for relief.

Director General of Government Information Nalaka Kaluwewa shared that the funds allocated by the Government were primarily in order to provide relief for the people undergoing the quarantine process. The funds were assigned to provide relief packs to families quarantined in their own homes as well as to provide a relief allowance of Rs. 5,000 to low-income families in areas where quarantine curfew has been enforced.

However, The Sunday Morning Brunch looked into the way that a number of areas have interpreted this criteria of “low-income families” and those who are overall deserving of this government aid. 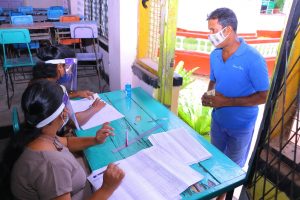 Each person’s details were taken down for reference

He said they were advised not to simply go by the list they created for the first lockdown, adding that they eliminated an extra layer of people who would receive it.

In their case, they had only distributed to persons who were reliant on aid, especially persons receiving the Samudhi benefit, persons who were self-employed, and persons such as pensioners and government servants, while those employed at private corporations did not qualify to receive aid.

In the Attanagalla Division in Gampaha, we spoke to persons who received the Rs. 5,000 relief. One individual residing in Nittambuwa shared that each family was given Rs. 5,000 and as long as you are not a government servant or a pensioner, then, regardless of your financial status, you received the money. He expressed that there were a number of families who received the money and upon realising that they are not deserving of it, went about distributing it to others who may need it more.

He shared that this was an oversight on the side of the authorities, noting that in their attempts to appear fair and non-discriminatory, they have given out scarce government funds to some who are not in a dire need of it.

There was another family in Attanagalla who shared that they too received the Rs. 5,000 relief. While at first they had wondered whether to refuse it, considering the nature of how the distribution is taking place, they chose to accept the money and utilise it to purchase goods for those who really needed it. They stated that they did not have trust in the local government authorities to direct the funds to the right people in the right way.

Distinguishing between the rich and poor 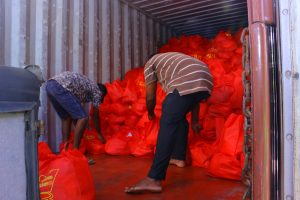 Ration packs being unloaded for distribution

There are a few things to look at in the entire initiative. First is missing the mark when it comes to distributing funds; as to how the criteria states “low-income” families are to receive the aid, but families with means also receive the aid. The simple answer given by divisional authorities is that it is not up to them to decide if you are “rich or poor”, and that upon eliminating those who do not fit into their specific criteria, the remainder would receive regardless of whether they have the means or not.

They have adopted a system where they rely on the kindness of those individuals; it is reliant on people checking their own privilege and being selfless enough to utilise what they have been given for the betterment of others. While human kindness is wonderful, is this a failsafe system? In terms of the distribution of funds, shouldn’t the authorities take better care in distinguishing between who is deserving and who isn’t? Or at the very least, actively encourage those with means to think about forfeiting their right so they may use it for someone whose needs are direr? These are questions that remain unanswered by the authorities.

In addition to the relief fund, there are relief packs given to families that are self-quarantining. Understandably in this scenario, however, whether you have the means or not, you are unable to leave your home in search of groceries.

Kegalle District Deraniyagala Divisional Secretary I.K.R.S. Bandara Menike shared that as Kegalle was not one of the districts that received the Rs. 5,000 intended for low-income families, they received the Rs. 10,000 relief to be utilised to purchase dry rations and vegetables to be given to self-quarantining families. 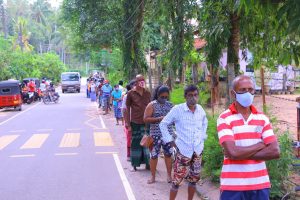 People standing in line to receive their ration packs

She said that there was initially a delay in the money reaching them and so they were told to purchase items from the shops – Sathosa and co-operative outlets – which would then calculate the lowest possible rate for each item and create the food pack on loan on the promise of it being reimbursed when government aid comes in.

There was a general confusion created amongst the public after seeing some of the relief packs that some families had received, with many pointing out that they did not in any way measure up to a value of Rs. 10,000. However, speaking to a number of divisions, we learnt that they had been instructed to distribute the packs for two weeks, with each pack worth Rs. 5,000, where the families are to receive the second pack the following week.

Bandara Menike shared that they were able to deliver the packages in a timely fashion to the 18-20 families that were self-quarantining in their area, as they were given the go-ahead to purchase on a loan basis.

Colombo District Wattala Divisional Secretary R.D.T. Rajika shared that they received all the money on time and they went about distributing it immediately. She said that in Wattala, as of 11 November, they have had a total of 1,361 families who are self-quarantining with about 20 of them days away from completing the 14 days.

She said that in their area, they did face some complications when it came to delivering the food packs as the Government did not provide a solution for the distribution of food parcels, adding that they went about the delivery by utilising the official vehicle – a singular cab – and a number of personal vehicles of some of the officials in the area. In doing so, she said that some of the vegetables and fresh produce were crushed and so when the families received the items, they were not at optimum quality.

Understandably, in a situation where government agents are involved and given the general mistrust people have with local authorities handling funds, there was widespread scrutiny of this particular relief pack that many have been receiving, with some wondering whether what they received truly adds up to Rs. 10,000.

To make things clearer, Rajika broke down the list and quantity of items they delivered to the relevant families this week. They included 10 kg of white rice, 2 kg of dhal, 422 g of garlic, 1 kg of green gram, 2 kg of sugar, two tins of salmon (large), 200 g of chili powder, 200 g of chili pieces, 2 kg of flour, 400 g of Anchor milk powder, 200 g of tea, 400 g of cream cracker (family pack), 1 packet of salt, 2 kg of big onions, 1 kg of Lanka potatoes, and 200 g of coriander seeds. She said they originally included coconuts, but as the price has been increasing, it had been difficult to include it while balancing out the rest.

Meanwhile, several attempts made to obtain information from divisional secretaries were futile, as they were reluctant to share information.

Finally, when we asked whether there were any who refused the food packs, or proposed that theirs be given to somebody else, Rajika said there were none to her knowledge. As these are difficult times, it is a point to consider whether our people are missing out on an opportunity to truly be kind and better to one another.

July 8, 2021 byNews Admin No Comments
The recent reports – of a 15-year-old girl who was sold online for sex – have caused an uproar and fresh talks surrounding child abuse in the country. The sexual exploitation of children, both girls a