September 16, 2019 by The Sunday Morning No Comments

The first organisation founded in Sri Lanka with the objective of preventing suicide, Sumithrayo is not an organisation that wouldn’t take World Suicide Prevention Day without notice. The passionate and wholehearted volunteers at Sumithrayo organised a press conference on 10 September 2019 – the date to which this distinct day belonged – with high hopes of addressing the theme “Working Together to Prevent Suicide”. 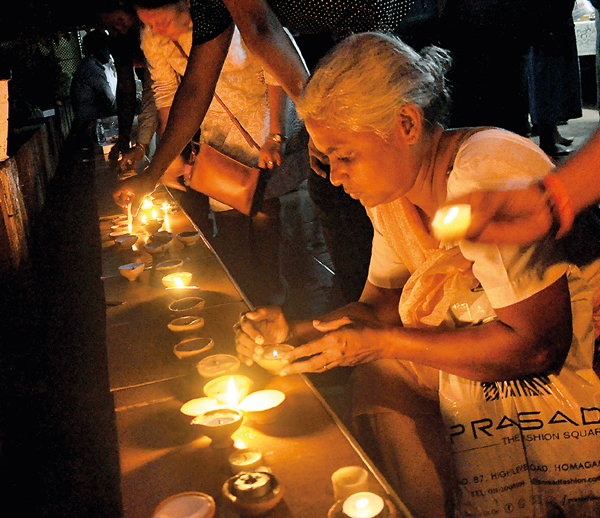 The discussion was held with the aim of raising and spreading awareness amongst the public about the fact that suicide is preventable and that it simply requires patience and co-operation from all parties surrounding those at risk. The panellists included World Health Organisation (WHO) Deputy Representative of Sri Lanka Dr. Olivia Nieveras, Sri Lanka Police DIG Ajith Rohana, consultant psychiatrist Dr. Neil Fernando, Hithawathi Project Manager Niroja Jayawardena, counselling psychologist and psychotherapist Nivendra Uduman, and Mel Madura senior staff member Prasad Gunawardena. Each panellist had a distinct and specified aspect to cover with regard to suicide in Sri Lanka, providing a broad and thorough collection of information for listeners to absorb under a wide range of relevant key issues. This was particularly necessary as the scale and importance of the issue was felt by a similarly wide scope of individuals. The audience comprised various individuals from young to old and locals to foreigners.

Each panellist was given the opportunity to present their insights to the audience. Dr. Nieveras started off the talks with sharing how the WHO was handling the global issue of suicide. She spoke about the role played by various forms of media using stories of suicide for popularity instead of tackling the issues sensitively in a way that reduces stigma.

Dr. Fernando professed his concerns about youths committing suicide in the prime of their lives. He was also extremely concerned about the recent trend in suicide rates within the past three years. From 2016 to 2018, the number of suicides per year has increased by 258, although it has not reached the levels of suicide that prevailed in the mid-90s, especially in 1995, in which the number of suicides was over 9,000 – an alarming trend. Further, DIG Rohana argued that suicides in the 90s were often a result of situations that arose due to the civil war Sri Lanka was facing at the time, adding that the increasing rates of suicide after 10 years of peace is something to be concerned about. However, Dr. Fernando was certain that it is not too late to bring about change. He was adamant in making it known to the public that the belief that nothing can be done about suicide since the individual “wants” to end their life is a common myth of society. For example, the survivors of attempted suicide had claimed that as they were plunging into what they thought were the last moments of their lives, all they wanted was to live.

Revealing another myth about suicide, Uduman wanted to make it known that talking about suicide would not provoke it, but rather allow a forum for it to be spoken about, thereby allowing finding resolutions to the issue. He believes that the best method of preventing suicide is through conversing about it out in the open and removing the label of “taboo” that still follows the word in Sri Lanka. Although we Sri Lankans like to claim that we are a collectivistic country, Uduman showed that as generations evolve, our society isolates more and more people. His main advice towards those trying to help their loved ones at risk was that all judgments should be put aside, giving way for empathy as it is the best way to help. Jayawardena too encouraged bringing the topic of suicide into open conversations as she explained the role played by Hithawathi in preventing suicide. They connect those facing trouble in cyberspace to places like Sumithrayo which can be of aid to them and help them through their suffering.

DIG Rohana was able to provide all the statistics of suicide in Sri Lanka. In contrast to Dr. Fernando’s worries, the police records of the recent past show that the majority of suicides occur within those of the age groups over 45 and that the reason for most suicides are unknown. The second largest reason for suicide, according to DIG Rohana, is disputes within the family while the third is chronic illness. This simply goes to show that 8,295 deaths (those due to family disputes) could have been prevented with a little bit of sympathy. He also unfolded the history of the island when he spoke about the law implemented by the ancient kings of Sri Lanka with regard to suicide; if a suicide was to be identified, the family of the victim would be subject to a fine. The reason for this was that the family was not sympathetic enough to save the life of the individual. Through this, DIG Rohana showed that those around the victim have a larger role to play in the victim’s wellbeing.

With each of their words and varying concerns, the panellists made it clear that solving the issue of suicide is not a lost cause. On the day dedicated to preventing suicide, Sumithrayo was able to truly show the people of Sri Lanka that suicide isn’t an issue to be ignored, but rather a problem that we as a community can solve.

May 30, 2021 byNews Admin No Comments
Reusable and circular products will be prominent for years to come and the cost benefits of circularity are also gaining attention; the application of technology in proactive product processes and pra