September 14, 2020 by Dimithri Wijesinghe No Comments 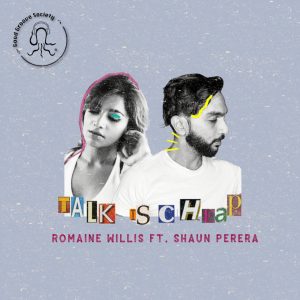 Leaving out a few exceptions, the entire global population would probably agree that 2020 is looking more and more like a lost cause and all we can really look forward to is for the next three months to pass us by as smoothly as possible. Amidst all this however, there have been some beautiful moments, most notably in the arts, with artistes coming together to create.

One such example could be the unexpected, but sure to be fantastic, collaboration between Romaine Willis of FLAME and Shaun Perera of Magic Box Mixup and their new cover track “Talk is Cheap”, brought to all of us courtesy of Good Groove Society.

Romaine, who has been in the industry for a good decade now since she was 15, has really experienced a booming rise in her career since her time with FLAME for the past three years, and speaking to her about this upcoming project, she shared that she was approached by Good Groove Society to collaborate on it with Shaun, and considering how Talk is Cheap happens to be one of her favorite songs, she was more than happy to come on board.

“We got together at Shaun’s home studio and worked on the arrangement together,” she said, adding that they are extremely happy with how everything turned out. She further shared: “We had Omesh – an extremely talented, fresh, and young producer – come in and really change things up.” 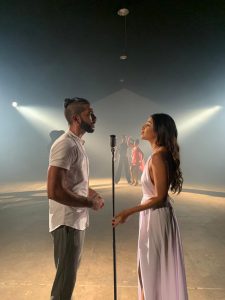 Romaine also shared that they have a gorgeous music video in store as well, with photographer Dylan Seedin bringing forth the concept, and with Good Groove Society Founder Mahesh Dharmadasa and Bakes by Bella Owner Melissa Dharmadasa contributing as well.

We also spoke to Shaun, who shared that they had a great time working on the new arrangement for the cover, adding that while he had a certain way of singing it at first, with Romaine coming in, the collaborative effort ended up creating a brand new version.

He also spoke about how the pandemic has effected them as musicians, how live gigs have been scarce, and how it has been difficult in general. However, he noted that in making a practice of looking at the silver lining of things, he said that they’ve certainly been able to come out of this experience a bit more mindful and appreciative of the things they have. He further explained how it has broadened their horizons in terms of what they could do via their social media to better connect with their audience, and now they are experiencing the results of having stayed in touch during the lockdown, as they feel more connected with those who listen to their music.

Romaine too stated that while it has been tough, they’ve made some progress with regard to creating original content, sharing  some upcoming projects – original content in the works with “middle-class, rich kids” and some Sinhalese songs set to come out as well. She said: “I’ve been working on some Sinhala tracks; something that appeals to the masses. It was a new experience and out my comfort zone but it was a rewarding challenge.” We can expect Romaine’s upcoming projects early next year, and of course you can catch her performing with FLAME every Wednesday and Thursday evening at the Hilton lobby, and Friday and Saturday jamming at Curve.

Keeping our industries alive: How will the third wave affect Sri Lanka?

April 29, 2021 byNews Admin No Comments
The new virulent Covid strain has once again disrupted life in Sri Lanka. Talks of a third wave have become more pronounced and we can’t ignore it anymore. There are speculations that the new virus is