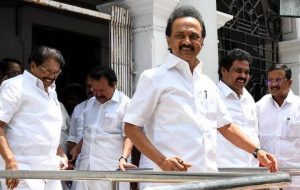 DMK president M K Stalin and PMK founder S Ramadoss flayed the Sri Lankan government’s decision to sing National anthem in Sinhala only on Independence Day and termed it as an attempt to isolate the Lankan Tamils, News Today reported.

Stalin tweeted that such majoritarianism act would lead to isolation of Tamils in the island nation.

Ramadoss, in a statement said the Lankan government’s decision to sing the National anthem only in Sinhalese during the country’s 72nd Independence Day celebration on 4 Feburary 2020, was an insult to Tamils and strongly condemned it.

He said the Lankan government had taken such a decision to appease a majority of Sinhala people who voted in favour of them.

The absurdity of giving firearms to farmers

March 18, 2021 byNews Admin No Comments
It is not unknown that the present state of affairs relating to every section of the environment in Sri Lanka is in utter chaos. In fact, there is only destruction taking place, whether it is related

July 4, 2019 byRandev No Comments
The Court of Appeal has ordered that the Writ petition filed by journalist Malinda Seneviratne seeking the prevention of the implementation of the death penalty, be postponed for tomorrow (05).