Tamils hopeful as Modi raises 13A 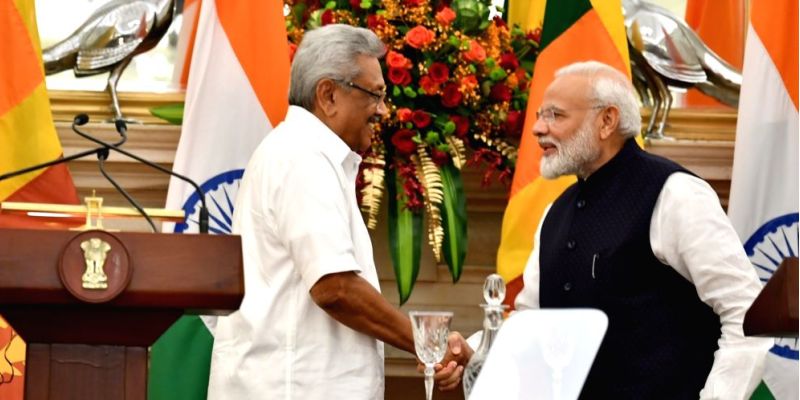 Tamils have raised hopes after India had on Friday noted the importance of reconciliation and ethnic harmony in Sri Lanka during talks with President Gotabaya Rajapaksa.

Indian Prime Minister Narendra Modi had on Friday said that he was confident the Sri Lankan Government will pursue the process of reconciliation to fulfil the aspirations of Tamils for equality, justice, peace, and respect.

More importantly, he said the process should also include the implementation of the 13th Amendment to the Constitution.
Tamil National Alliance (TNA) Parliamentarian and Spokesman M.A. Sumanthiran told The Sunday Morning that the Tamils are hopeful following the statements made by India during and before President Rajapaksa’s visit to New Delhi.

Sumanthiran said that the TNA now expects President Rajapaksa to engage with the TNA to discuss the issues faced by the Tamils.
“When the President returns, we expect some engagement with us on the Tamil issue,” Sumanthiran said.

President Rajapaksa returned to Colombo yesterday (Saturday) after extensive talks in India with the Indian President, Prime Minister, External Affairs Minister, and others.

There had been fears following the presidential election that the Tamil issue will be pushed back.
However, India had given the impression that the issue will be kept on the agenda and that the 13th Amendment to the Constitution was not a closed subject.

Former TNA Parliamentarian and Eelam People’s Revolutionary Liberation Front (EPRLF) Leader Suresh Premachandran said that he was doubtful the 13th Amendment will ever be fully implemented.

Speaking to The Sunday Morning, Premachandran recalled that even former President Mahinda Rajapaksa promised to implement the 13th Amendment but failed to do so.

However, the former and present Government have refused to agree to merge the North and East, fearing it would pave the way for a push to create a separate Tamil state.

Premachandran feels the current Government will drag its feet on the Tamil issue till the parliamentary election.

A call to unite

Meanwhile, last week, the TNA issued an open call to Tamil political parties to join the alliance and stand united on the issues faced by the Tamils.

Sumanthiran said that Tamil political parties must not attempt to divide the Tamil community.

He said that with parliamentary elections coming up, it is important that Tamil parties unite and ensure Tamils are united.
Sumanthiran said that the TNA is the main Tamil political alliance in the country so other parties must come under its wing to fight for the rights of Tamils.

However, Sumanthiran told The Sunday Morning that as of Friday, no party had responded to the open invitation.

Who will pay for this unnecessary lockdown damage?

June 21, 2021 byNews Admin No Comments
The extension of travel restrictions on 14 June was due to the fact that the data had been doctored, said the President at a recent press conference. No pun intended.

Man on a mission

January 5, 2020 bythemorninglk No Comments
Late last year, soon after the presidential election was announced, then President Sirisena made an announcement. He said, up until the end of the election and his term, he would remain neutral.