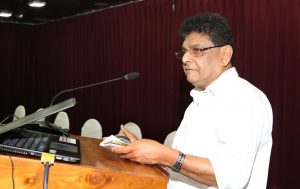 The Sri Lanka Tea Board (SLTB) has requested the Chairman of the Japan Tea Association (JTA) to arrange discussions with regard to potential projects or joint ventures in the Sri Lankan tea sector, with the concurrence of the Board of Investment (BOI).

“Such projects could be in the form of industrial nature or any tea-based manufacturing of pharmaceuticals, cosmetics, dyes, or food. We would suggest industries such as specialised green tea, oolong tea manufacturing projects, and tea concentrates including instant tea production, etc.,” SLTB Chairman Jayampathy Molligoda stated in the letter.

Molligoda also noted that SLTB is intending to soon introduce artificial intelligence (AI) and/or robotic technology to the entire supply chain of the tea industry or selected corporates coming under the sector.

Sri Lanka has long-standing ties with Japan. According to Tea Exporters’ Association (TEA) statistics, Sri Lanka exported 1,931 MT of tea to Japan during the first quarter of 2018.

The letter refers to the Japanese Government’s $ 2.2 billion stimulus package announced this month to assist the Japanese companies that are willing to move out from China. Japan’s announcement for its companies in China came early this month and is part of the massive $ 989 billion financial stimulus package to combat the recessionary effects of the Covid-19 pandemic on the Japanese economy. Accordingly, $ 2 billion has been allocated to assist companies shifting production back to Japan and $ 200 million has been allocated for those seeking to move production to other countries.

However, when inquired by The Sunday Morning Business, Molligoda denied that this letter was intended to capitalise on the rift between Japan and China and stated that it was aimed more at establishing long-term, sustainable partnerships and joint ventures with Japan.

However, Sri Lanka has to face tough competition to attract Japanese companies or projects to Sri Lanka that are moving from China, as Southeast Asian countries are pitching them too.

According to Indian news reports, Gujarat has written to political and business authorities of the US and Japan, inviting them to shift their commercial units and operations from China to Gujarat.

It has also been reported that the Korean Consulate in Chennai has been working with a number of requests of South Korean companies in China, to move to India. However, most of the companies and manufacturing facilities in China have already moved, and began moving to Thailand and Vietnam in the past few weeks.

January 10, 2021 byRusiru Keppetipola No Comments
The new Central Bank Bill, proposed and drafted by the previous Government amidst wide objection from the then Opposition party, is expected to be implemented by the current Government after making..

Companies cut down their office space

June 14, 2020 byCharindra No Comments
Several large companies have reduced their office space utilisation in a bid to cut rental costs and save on overheads, which are a significant portion of a company’s expenses.