Tea Syndrome getting into baking bread?

October 20, 2021 by Dimithri Wijesinghe No Comments

Tea Syndrome is making some big moves – what started as a very small business by two young brothers Sh’lom and Jehayel Fernando selling tea and some snacks at a stall down Stanley Tillekaratne Mawatha in Nugegoda has since grown into a bustling new business venture. 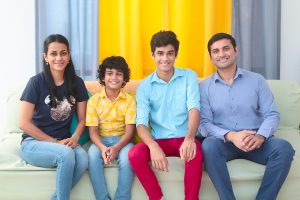 However, with the incredibly warm reception they’ve had over the past eight to 10 months, the Fernando family has started to expand upon their once small initiative into an SME, growing from operating an evening stall offering tea and some snacks to intruding a range of food items; some bites/snacks to sweets and dinners, finally offering 18 varieties of food and three varieties of tea.

Making the shift from the two brothers’ partnership to a family-run business, Tea Syndrome is looking at a potential rebranding as they just celebrated their one year anniversary on 7 September.

With the new transition, each family member has taken on a significant role in carrying out operations, and speaking to Chaminda Fernando, the boys’ dad who has taken on a consultancy role in the operation with his wife Revon Fernando as Head of Operations, he shared that while they had originally hoped to restart their stall once lockdown lifted, they felt that it was unsafe for the kids and with the rapid growth of the business, it was soon becoming rather difficult to focus on multiple fronts.

However, Chaminda added that the lockdown has been somewhat of a silver lining, considering how they started to focus on making their products available on Uber Eats and PickMe Food. This was also when they came up with their now signature product – artisanal breads.

“It all started with an introductory post of our Ciabatta Breads and Fresh Bread on social media that went viral and we found ourselves getting bread orders from different parts of Colombo,” said Chaminda, adding: “From that point we had to make a decision and discontinued our stall operation as we could not think of handling the food production volume for the stall and cater to the increasing bread demand/orders at the same time.”

They are currently offering an impressive range of breads – and it is important to note that Tea Syndrome guarantees that their breads are made in their purest form, as they do not add any preservatives, additives, stabilisers, or improvers in their bread-making process. Chaminda shared that this care that they put into the process is what helps them maintain their unique unmatched texture and taste while giving absolute value for your money. The home-baked breads are made in their own home kitchen adapted to safety and hygiene measures. 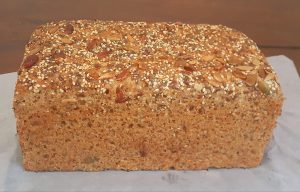 Having started off with their Ciabatta which originally is an Italian bread, Chaminda said that they’ve managed introduce a Sri Lankan twist to it as they offer four unique types – Signature Ciabbatta, Rosemary and Salt Ciabatta, Umami (Marmite) and Karapincha Ciabatta, and Cinnamon Sugar Ciabatta.

Their Special Fresh Bread is a version of the kade paan but, made with far less yeast and salt. They also offer a Sandwich Bread which is super soft.

However, the real highlight is their newly introduced health range – which includes their 100% Wholemeal Health Bread which according to Chaminda is very rare “It’s probably the only bread in the market that does not contain any refined wheat flour and is sugar free”, he said. If you’re going for the wholemeal, you have the choice of opting for the one with muesli on top, and they all come glazed with extra virgin olive oil on top for added taste and health advantages.

Then, they have the real star of the show – the 7 Seed 100% Wholemeal Health Bread introduced in mid-August. Chaminda provided that it is the first-of-its-kind in Sri Lanka. In addition to the top health benefits from wholemeal, such as maintaining a healthy heart, controlling diabetes, helping weight loss, supporting the digestive system, and fighting certain cancers, he shared that the seven super seeds comprising of chia, flax, sunflower, pumpkin, sesame, quinoa, and almond are known to be a powerhouse of nutrients including boosting of one’s immune system. The 7 Seed 100% Wholemeal Health Bread also had an impressive one-week long shelf life. 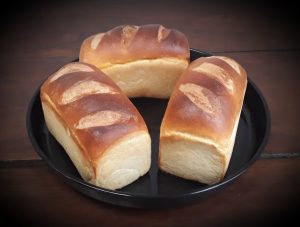 Tea Syndrome is also currently working on a gluten-free bread that caters to people with certain allergies, to be available soon.

Considering these new changes, especially their deviation from focusing on tea, Chaminda shared that continuing to emphasise on “Tea” in their brand name does not portray the actual value they bring to the society. And, considering how the tiny operation started by the two boys has grown into a family business, they hope to rebrand their bread line under “Elshaddaii Artisan Breads by Tea Syndrome” and “Elshaddaii Culinaries by Tea Syndrome” for the rest of the food types.

If you’re looking for freshly baked nutritious breads that support your healthy lifestyle then Tea Syndrome has you covered.

Pre-order breads before 10.30 a.m. which are only available via direct order on WhatsApp 077 3183777 or Facebook/Instagram direct message. All other foods are available on Uber Eats and Pickme Food.

March 22, 2020 byJennifer Anandanayagam No Comments
nATANDA is the first and only Sri Lankan professional contemporary dance company based in Colombo. It was founded in 2002 as a non-profit organisation by Kapila Palihawadana who trained in modern danc

July 1, 2019 bythemorninglk No Comments
Climate change is now a normal term in our vocabulary, and it is almost clichéd as it is used so commonly. It was an unknown one to the generation before us.