Today on the Little Stars cover we have Sh’lom (13) and Jehayel (eight) Fernando, two brothers who are taking up a small start-up business called “Tea Syndrome” with the support of their parents. According to them, the foundation of Tea Syndrome was laid with their father’s love for a perfect cup of tea and the determination to master the art of making the perfect cup of tea. The little star behind the idea of Tea Syndrome, Sh’lom, is not only an entrepreneur but is also a beatboxer. He has beatboxed at open mics at the Good Market and in his school Lyceum International School. He won the Best Speaker title at a competition organised by the University of Colombo in 2017 and again at the British Lanka Festival for the Performing Arts last year. He has won six out of eight best speaker contests in school over the years. He is also a member of Lyceum’s Senior Choir directed by Ian Ranasinghe, which won the Ministry of Education’s All Island Mixed Choir Competition in 2018 and the Inter-International Schools’ Choir Competition in 2019. He was also part of the team which brought the school a Golden Diploma in January, ranking fourth worldwide, at Sing’n’Pray Kobe 2020 in Japan.

Sh’lom also dreams of becoming an actor in the future. So far, he has played a few lead roles in The Greatest Shows organised by The Workshop Players in 2018. He is also involved in school drama and in 2019, their team came fourth in their first Shakespeare Drama Competition, in which he played Viola in Twelfth Night, the main character, as a 12-year-old. Sh’lom is also a swimmer.

This multi-talented star together with his brother Jehayel shared their experience with us on starting their business.

What inspired you to start Tea Syndrome?

I am Sh’lom Dhiren Jedaii Fernando from Lyceum International School and I’m 13 years of age. I’m in Grade 9 which is the first out of two years of our Ordinary Level (O/L) grades. As a hobby, I used to collect dead insects which I would keep in a box. I used the proper apparatus required for insect-keeping which my mom gave me as a gift. I only got so far before my desire for dead insects died down. I still have the box of insects though.

I lived the first year and a half or so of my life in Colpetty and I’ve lived in Nugegoda ever since we moved out. During the first lockdown in April this year, my Aunt stayed over; she taught me how to make a cup of tea and I slowly kept practising through breakfast and dinner drinks. My dad loved my tea and would wake up every morning to one of them, paying me Rs. 10 each time. I then thought I could make a bit more money if I sold a good cup of tea to customers. I was passionate and wanted to start a business, and therefore started Tea Syndrome.

We started with just a single flask fit for only eight cups of tea, my father’s bedside table, my brother (though at that time was not ranked Marketing Manager), and a bucket full of fear and confidence combined. Two months down the line here I am, with more than 10 regular customers, for which I thank my landlord, for without his help I wouldn’t have had a table to serve my products; my grandfather, who helped me get the paper cups; Uncle Bala, who provided me with my first proper flask; and many anonymous people, who have generously said: “Keep the change”. Most of all, I thank God for bringing me to where I am right now, for it is written “I can do all things through Christ who strengthens me”.

Tea syndrome is an interesting name. Why did you choose that name for your venture?

Well I can’t take full credit for the name. All the credit I can take from the name is for “Tea” and “Syndrome” was my dad’s idea. He decided that if he could get addicted to my tea, well then so could every other tea lover. So, in the end, I was highly satisfied with the name, though not so with my brain for not thinking of that name first (haha!).

How has your experience been so far? Any positive feedback you’d like to mention?

Through my two long, hefty, hard-working months, I’ve learnt A LOT. To start with, I can finally understand my commerce teacher’s teachings. Accounts, sole traders, the economy, and more. I have learnt that the not-so-considerate people who park a seven-to-10-foot jeep just outside your stall purposely, or the impolite people that just pass you pretending you’re not there, all don’t matter, because the people who are friendly and those that realise you’re trying to make a difference in society always stop to enjoy what you have to offer and are all worth the effort. I also get free maths tuition from this real-life experience. Quick calculations need to be made accurately in time or else you lose out. Social skills developing, the acceptance of losses or failures, leadership qualities, and the joy of seeing some of your friends come twice over sometimes to enjoy your delicacies are all a part of signing up for the entrepreneurship of a business.

What does the term “entrepreneurship” mean to you?

From what I’ve learnt at school, entrepreneurship is taking the risk of investment, going out of your comfort zone, and doing something or starting something that no one else has started by mixing land, labour, and capital. In my opinion, it’s all true; the investment fear, facing uncomfortable situations on the road, learning how to meet and greet new faces in society, and introducing and explaining Tea Syndrome as a 13-year-old, are all there. It’s all a part of the definition.

What can you tell us about making a good cup of tea?

It has to be a perfect ratio of blending the milk, sugar, and tea with the right amount of brewing. It’s actually an art I would say…

Who helps you make the food items and prepare for business?

My mom does a lot in terms of preparing the food, starting from morning. I make the tea in the evening and my dad and I (mostly me) pack most of the stuff into the car and set up our location next to Cargills, about 80 metres from our gate.

Can you tell us where we can find you?

Me? Or the business? if it was the business, you can find us down Stanley Tilakaratne Mawatha, between Cargills and Synergen Health, under an umbrella. We also have a hotline, 0777 793 312/0767 477 441. If it was me you were trying to find, then I can’t tell you that due to highly confidentiality and security reasons.

Sh’lom, according to you, what are your responsibilities as the business owner?

As the business owner of Tea Syndrome I’ve understood that there are multiple responsibilities. Making the tea on time, making sure the notice boards are inked properly, making sure my mom’s done preparing the mouth-watering delights (I love her sponge cakes so much that I once bought nine for myself before she could bring them out to sell), making sure we get out on time to catch the working crowd, making the daily accounts and sorting out cash, and much more.

Jehayel, your brother calls you the Marketing Manager. What are you doing to support him?

Sh’lom, can you tell us about your future goals?

I plan on expanding Tea Syndrome to the maximum leveI I can afford during my gap year between the ages of 17, when I finish school, and 18, when I officially become an adult. I also plan on becoming a professional actor and am working towards it slowly and steadily.

If you had one piece of advice to someone just starting, what would it be?

Never postpone your events. Don’t be in a rush to spring into a full-sized company at once. These are one of the few times I agree with “slow and steady wins the race”. 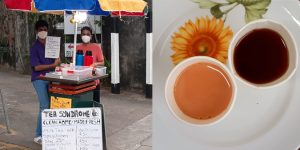 Nail trends you have to get on

September 20, 2020 byPavani Jayasinghe Munagamage No Comments
Every year, there is a new set of trends that come into play.

Over the due course of quarantine, when the world was shut down, more and more people found that they could do super creative nail art at

In conversation with Krisheni Nanayakkara : All things beauty, fashion, and marketing

March 20, 2022 byPavani Jayasinghe Munagamage No Comments
Over the years, I have had the pleasure of meeting various people. Someone I have looked up to for the longest time, and have had the honour of knowing, is Krisheni Nanayakkara. Krishen