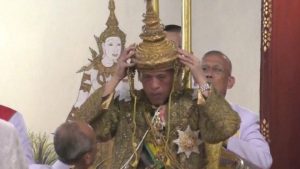 Thailand’s King Maha Vajiralongkorn has been crowned on the first of three days of coronation rites.

King Vajiralongkorn inherited the throne in 2016 when his long-reigning father Bhumibol Adulyadej died.

Days ago in a surprise announcement, the palace said the king had married his long-term partner and royal consort who would now be Queen Suthida.

Thailand has a constitutional monarchy, but the royal family is highly revered by Thais and wields considerable power.

Thailand also has strict laws, called lese majeste, which ban criticism of the monarchy. The laws have shielded the royal family from public view and scrutiny. 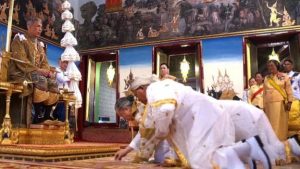 During Saturday’s ceremony, the 66-year-old king was handed the 7.3kg (16lbs) Great Crown of Victory, which he placed on his head.

He then issued his first royal command, promising to reign with righteousness, as his father had done at his coronation 69 years ago.

The coronation comes at a time of political uncertainty. A general election was held on 24 March, the first since the army took control in a coup in 2014, but a new government has yet to be declared. (BBC)

April 15, 2019 byRandev No Comments
The operator of Japan's Fukushima nuclear plant has begun removing nuclear fuel from one of the reactors that melted down after the devastating 2011 earthquake and tsunami.

February 21, 2021 byLahiru Pothmulla No Comments
Australian Prime Minister Scott Morrison was among those at the front of the vaccination queue on Sunday receiving a Covid-19 jab ahead of the start of the country's national roll-out, dpa news said.