The 80 Club of Colombo: Revamped and back in business

As a city, Colombo is graced by many iconic structures that hark back to our colonial history. The historic 80 Club of Colombo, located within the tranquil streets of Cinnamon Gardens, is one such magnificent edifice. This classic relic of British colonial rule bears all the hallmarks of colonial architecture and is surrounded by a spacious lawn. 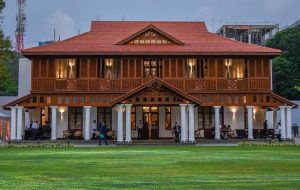 Entrance of the 80 Club of Colombo

Initially intended to be used exclusively by the British executive community in Sri Lanka, it was later patronised predominantly by Colombo (and Sri Lanka’s elite). With a laid-back atmosphere and a variety of food and beverage (F&B) services, 80 Club of Colombo, while equipped to accommodate business gatherings and professional events, became more popularly used for dining and entertainment.

However, over time, a fall in standards and a lack of proper maintenance of the premises saw the property begin to look like an echo of what it used to be in its glory days. Following a recent takeover by the Government of Sri Lanka, the 80 Club has been completely refurbished and restored to its former glory, having officially reopened on 21 October. 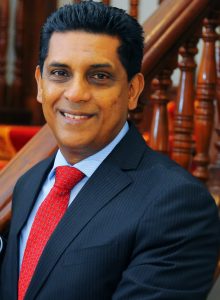 For a look behind the scenes of this beautiful restoration of one of Colombo’s most iconic clubs, Brunch spoke to Waters Edge Chairman and Chief Executive Officer (CEO) Rohan Fernandopulle.

The storied history of the 80 Club

The 80 Club of Colombo was originally established in 1939 in Kandy, before moving to its current location at Independence Avenue, Colombo. The name of the club stems from the location of its inaugural meeting – room no. 80 of the renowned Queen’s Hotel.

Exclusivity has always been a mainstay of the 80 Club, and part of the reasoning behind its shift to one of Colombo’s most prestigious neighbourhoods was to be able to maintain its tradition of welcoming Sri Lanka’s elite in a setting that was accessible yet exclusive.

For many reasons, beginning from the 1970s, the ownership of the club has changed hands several times, interrupting the smooth flow of its operations. The 80 Club’s most recent change of ownership took place in November 2020 when the Urban Development Authority (UDA) acquired the property for refurbishing and maintenance purposes. 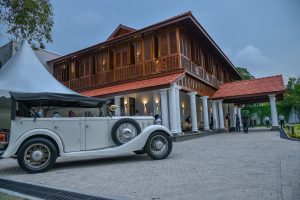 Waters Edge now manages the 80 Club of Colombo alongside other properties such as the Otter Aquatic Club and Grand Oriental Hotel of Colombo. Under their management, these properties are to be upgraded to meet the industry’s standards, with special attention given to crucial factors like hygiene, service quality, and customer satisfaction. Furthermore, Waters Edge has also worked towards obtaining recognitions such as the HACCP certification for these venues, to add more value to these investment projects and to be able to deliver the best quality to their patrons.

Over the course of seven months, subsequent to the change of ownership and management, the renovations of this historic clubhouse and its surrounding property were completed. Thereafter, it was declared open to its guests on 21 October 2021 by Prime Minister Mahinda Rajapaksa.

Given the building’s original architectural value, restoring the former beauty of the premises with state-of-the-art facilities had posed a major challenge. 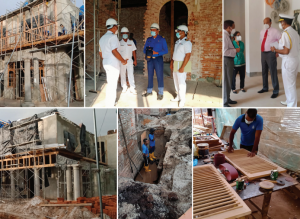 “The preservation of the architectural significance of the premises with due respect to its history was given top priority during the renovations. Hence, that was one of the most important features we wanted to restore. We took stern measures to ensure that no changes would be brought about that would impact the original colonial value of the building. Thus, it was only a restoration,” said Fernandopulle.

He went on to state: “The refurbishment of this property by various parties over the course of time had changed many original features of the venue. We wanted to restore these original characteristics. Therefore, extensive research was carried out on the property, and with the information gathered from the Department of National Archives (of Sri Lanka), we were able to achieve our goal.

“It was an old building that was falling apart and in dire need of repairs. The service standards too were diminishing. As a result of the renovations, the clubhouse has regained its charm and glory. This can be considered the best heritage club in Sri Lanka. In addition to the restoration project, we have focused on the quality of food and the service provided as well as the hygiene. We are currently in the process of acquiring the ISO 22000 certification to meet the standards of the hospitality industry while continuing to improve on all aspects daily.”

Implemented as a priority project by the UDA, with the Sri Lanka Navy contributing with their labour force for the refurbishment and construction work, a total area of 14,200 sq. ft. was revamped. This included the ground floor area of 7,625 sq. ft. and a spread of 6,575 sq. ft. of the upper floor in conjunction with the front garden that was also beautifully landscaped.

Fernandopulle further explained the alterations and additions brought about by the restoration project. He said: “Quite a popular concept, a theater room has been introduced to give the guests a cinematic experience, which will be beneficial to many. This facility can be made available for private screenings upon pre-booking. It is a great place for a group of people to gather to enjoy a movie or even to watch a match. Furthermore, the billiard room that was previously located elsewhere was brought to the same building. 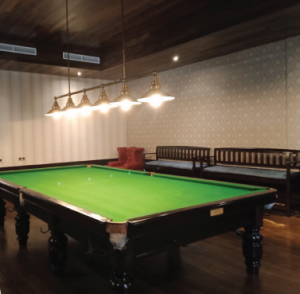 “A fully fledged boardroom for meetings and dining facilities spread out over six different rooms was also focused on during repairs. The ground floor and upper floor verandahs were also improved and redone in a manner ideal for the members and guests to enjoy a quiet evening. Similarly, the lawn that attracts the most attention too was done tastefully with the addition of garden tables and umbrellas.”

Enhancement of the back of the house, including the kitchen and the stewarding department, as well as housekeeping, in order to meet international standards, was one such development to follow. Additionally, a pastry shop is to be established in the near future, for foodies to indulge their cravings.

High expectations for a prosperous future

Though the 80 Club is exclusively for its members, additional features such as the pastry shop will attract more members of the public to visit the venue. Explaining further, Fernandopulle stated that a variety of events are being planned for the future, where both the members and other guests can join in creating everlasting memories while enjoying world-class hospitality.

Moreover, under the management of Waters Edge, and with their international culinary expertise and an unmatched class of service, the 80 Club of Colombo is expected to reach new heights in the days to come. 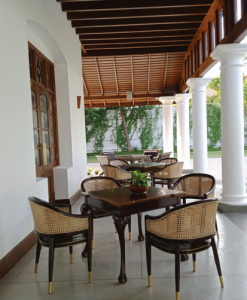 When inquired about the future of the 80 Club of Colombo, Fernandopulle explained their hopes to subject these premises to further improvements. “During the first phase of the operations, we had planned to mainly restore the clubhouse and its surroundings. However, developments will continue under the second phase,” he added.

Adding more glamour to this invaluable property, a proposal is to be unveiled to transform the 80 Club into a star-rated boutique hotel in Colombo, consisting of a pool and more advanced hospitality features in the near future.

As per the viewpoint of Fernandopulle, the secret to achieving such great success within a short span of time was their unwavering work ethic. He shared: “The pandemic brought numerous projects to a standstill, but we never ceased nor halted our work. With the Sri Lanka Navy’s Civil Engineering Department engaged in civil construction, we made great progress. All construction work was carried out under the strict adherence to the health guidelines, even though the days of lockdown.”

CandleAid: A shining light for those in need

August 22, 2021 byNews Admin No Comments
In a time where humanitarianism is growing more and more critical, and where more and more new causes are being funded, many NGOs are branded inefficient in providing for their chosen cause. In light

September 19, 2018 byJennifer Anandanayagam No Comments
Kamer Nizamdeen, a 25-year-old Sri Lankan PhD student of the University of New South Wales was arrested on 30 August for owning a document which was allegedly connected with the preparation for