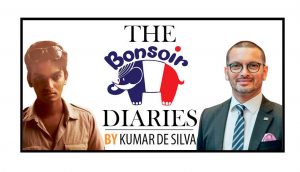 The Bonsoir French television programme presented by the French Embassy in Sri Lanka has entertained Sri Lankan audiences since July 1985. It ran for 25 years and finally closed down in 2010, leaving an indelible memory with the thousands who grew up watching it.

This was the pre-internet, pre-mobile phone, pre-computer, and pre-cable TV era when radio held sway and TV was still in its relative formative stage. With social media entertainment non-existent, Bonsoir enriched the local viewing experience and successfully played its predetermined 360 role of bringing France into Sri Lankan sitting rooms.

Around 2011, 11 years after I quit, I discovered, much to my great disappointment, that the Bonsoir archives did not exist. This was devastating for both my co-host Yasmin Rajapakse and myself. Years of hard work and a massive repository or archives had been “done away with”. There was no trace whatsoever.

It was then that Dilshan Boange (the Bonsoir Boy after me) suggested that I write “The Bonsoir Story”. This story appeared as a series of weekly articles in a Sunday newspaper, and then in 2013, took the form of a book titled “The Bonsoir Diaries”. 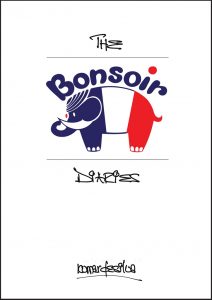 A Samaranayake publication, the book is a cocktail of chapters, bursting at its seams with pithy asides, a trail of faux-pas, tit-bits from behind the scenes marinated with anecdotes and drizzled with nostalgia, revealing everything you never saw on your favourite television show…from the 80s through the 90s into 2000.

On instant face value, “The Bonsoir Diaries” is a graphical record of the glorious years of this television show. I also went beyond my original mandate and parallely made this an unconscious record of Franco-Sri Lankan ties, bilateral, diplomatic, and otherwise, spread over nearly three-and-a-half centuries, going back to 1672, all of which are woven into the narrative.

This book deals with its first 15 years, of which I was a part, and which are fondly referred to as the “belle époque” (glorious era) from the early days of television in Sri Lanka to the arrival of the internet and social media.

Its 50 chapters unravel much of the intrigue we revelled in, the make-believe we loved to create, and the innumerable faux-pas we’ve tripped on.

This is simply a factual and personal record of my work with my first-ever TV show, the one which launched my career and opened countless doors in both my personal and professional life.

In the absence, sadly, of what should really have been the Bonsoir archives, this 2013 book in some way, fills that void.

Today, 5 January 2021, is exactly 35 years since I first appeared on the little screen, on Bonsoir, on ITN. In celebration, commencing today, The Morning is serialising this (now sold out) book every Tuesday.

Fifty chapters over 50 weeks will take us right upto Christmas 2021.

“No one who has watched this ground-breaking TV programme will ever forget it. I remember Kumar playing multi-roles as padre, inquisitor of the most charming kind, friend, comrade, and about the best television personality that I have ever encountered. I shall never forget Sumitra and myself walking into the Bonsoir Studios at the French Embassy in Rosmead Place, where Kumar held high office as friend, interviewer, with that combination of courtesy and insight embracing two countries, their personalities, their arts, their music, their politics, etc. ‘The Bonsoir Diaries’, the best of the best of this TV programme, will once again revive memories of one of Sri Lanka’s most remarkable TV series.”

May 27, 2019 byRandev No Comments
Sri Lankan veteran actor Gamini Hettiarachchi has passed away at the age of 68, earlier today (27).