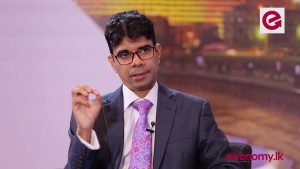 The Ceylon Electricity Board (CEB) Engineers Union widely circulated a letter by the CEB General Manager (GM) N.W.K. Herath, addressed to the Secretary of the Ministry of Power, dated 29 July 2021, on the challenges to achieving the State policy of 70% renewable electricity by 2030. Herath retired from service a month after sending this letter.

The context: What do other utility heads think?

The newly appointed AEMO (Australian Electricity System Operator) Head Daniel Westerman noted: “Everything I’ve learned in my career in engineering and business tells me that this energy transition, globally and in Australia, is a kaleidoscope of technical, economic, political, and societal challenges.”

His tone was markedly different from this letter. He spoke of how Australia is leading the energy transition, visualising a new era of prosperity that plentiful, cheap, and renewable electricity could deliver for Australia. He wants Australia to be ready to absorb 100% renewable energy at any given point of time by 2025. AEMO published a whitepaper on grid forming advanced inverters (already in operation in South Australia) – a critical component of a digital grid with high renewable energy.

The South African monopoly electricity utility Eskom CEO Andre de Ruyter made a different type of a speech about Eskom’s energy future. South African coal plants are unreliable, new coal plants are delayed by years, and an explosion in the Medupi coal plant being commissioned forced the country to rolling blackouts.

De Ruyter spoke of how the EU carbon border taxes will impact South African exports, the low cost of renewables, and the opportunity to rethink the grid. He will go to the UN climate summit in Glasgow in November with a plan to raise $ 10 billion to decommission 10 GW of coal plants, build renewables instead, and upgrade the transmission infrastructure.

The ‘reluctant’ letter of the former GM

The letter by the GM is a curious document, with a rambling defense of the CEB’s now abandoned “Generation Plan”. It may have been authored by the CEB Generation Planning team – indicated by its reference “GP/CE” instead of “GM”. The letter misses out the wider context, appearing to wish away the global energy transition.

The letter lacks the vision and ambition of CEB’s two counterparts from two of the world’s largest coal exporters; CEB appears to embrace coal that they eschew. I am no longer surprised by the story going around of the senior ministry official preparing documentation for the Government of Sri Lanka to buy a coal mine in South Africa!

Herath refers to a policy confusion alluding to three different policies in the last two years, including 70% clean/low-carbon sources by 2030 as stated in September 2020. There is no evidence of such a policy in the public domain. There is no gazette, nor any reference in sector websites. Statements by the President, Prime Minister, Minister of Power, and the budget speech of November 2020 all state renewable energy.

Even from a technical standpoint, the globally accepted definition of “clean energy/low carbon sources” is renewable energy. She should know this as an experienced utility leader.

CEB is a non-sentient institution (oh my!) not bestowed with the power of perception. Who in the CEB “perceived” this policy, and should a personal perception determine a 20-year national plan? There is nothing in the Section 5 of the Electricity Act on how to deal with “perceived policies”.

This “misperception” resulted in one and a half years of working on non-viable and expensive fossil fuel projects, while blocking numerous renewable energy projects. The list is long; the non-viable coal plant expansion, which has wasted Rs. 200 million according to the CEBEU; an LNG FSRU tender that now appears grossly oversized, which would saddle Sri Lanka with additional financial cost and risk; a gas pipeline from Kerawalapitiya to Kelanitissa which has no financial or economic viability. CEB appears to be still dreaming of a triumphant return of their fossil fuel gods.

This is why organisations work on clear written policy documents without relying on the perception of some official or the other. That a senior public official such as Herath unabashedly signs such letters raises serious questions about the sector governance.

I believe the new Minister of Power and Energy Gamini Lokuge will provide decisive leadership that was lacking in the Ministry and provide crucial support to Minister Duminda Dissanayake, who has been championing renewable energy throughout the last year.

Capacity additions: The inability to procure

Herath noted the time spent trying to procure 100 MW ground mounted solar PV plant in Siyambalanduwa and 100 MW wind plant in Mannar, in order to raise concerns about feasibility of a high renewable energy target. I agree with her on these projects, adding the CEB’s multiple solar tenders to the list – all of which have underperformed. Even with these issues, only renewable energy projects have been added to the grid between 2014-2021!

Two planned and cancelled coal plants (Sampur was in doldrums for 10 years before cancellation in 2016), the R-LNG plant in Kerawalapitiya tendered in 2016 but still without work on the ground, the second R-LNG plant recently tendered – way behind the planned date, show the other side of the story. The gas turbine drama at Kelanitissa is also an illustration (Who promotes gas turbines in 2021 instead of battery storage, and why, is also a question. The highly contagious battery phobia within the CEB requires a strong dose of reality medicine).

The CEB procurement process for all power plants is fundamentally broken (except for emergency power). Now it offers a golden opportunity to create a workable procurement model. We can revive our successful NCRE feed-in-tariffs, which CEB blocked from 2016.

We can replicate globally successful models such as the Solar Energy Corporation of India (SECI), set up to scale solar deployment. This team has delivered; India crossed the 100 GW of renewable energy (without large hydro) with a huge capacity of projects already in the development pipeline. India launched 54 GW of solar tenders and auctions in 2020 in the midst of a pandemic.

We eschewed support too. The World Bank offered to implement their globally successful “Scaling Solar” programme to Sri Lanka in 2016, which was turned down by the Ministry and the CEB.

We must act fast, reinstating the NCRE feed-in-tariff methodology with a revised tariff for small scale renewables and by setting up a large scale renewable energy procurement organisation independent of the CEB (to avoid sabotage), staffed by experienced procurement professionals, who will scale with global guidelines and benchmarks.

The cost of battery storage is rapidly declining. The US National Renewable Energy Lab (NREL) estimates a 37% reduction by 2025 and a 55% reduction by 2030 compared to 2019 prices – projections other analysts agree with. Since we need batteries between 2025-2030, we can estimate this cost to be less than $ 750 million – 50% of the lower figure mentioned by her.

The transmission upgrade costs: The urge for a backbone

Herath noted that because solar generation peaks at midday and sends a lot of energy during a short period of time, Sri Lanka will need a 400 kV transmission backbone. This is speculation, as CEB has never modelled a high renewable energy scenario, though having ample opportunity to do so. The current AGM Transmission and DGM Generation Planning were in a committee to map the path to 80% renewable energy by 2030, which stopped work after an interim report.

All leading utilities model rapid decarbonisation scenarios as a matter of routine, yet even the target in the budget has not prompted the CEB to do so.

If an optimised transmission and generation planning exercise has been conducted, it would have been evident that a 400 kV backbone is not needed and these costs are overstated and/or double counted. There are multiple paths that can avoid an enhanced backbone.

Many power systems specialists with intimate knowledge of the Sri Lankan grid disagree with the need of a 400 kV backbone. This was also stated by the current CEB GM M.R. Ranatunga at a webinar on 2 September hosted by SLSEA.

One must wonder whose interests CEB is serving by creating an illusion of high cost without proper optimised studies when multiple alternatives exist.

Even assuming the two costs mentioned by Herath (storage $ 1.8 billion and transmission $ 1.7 billion) is accurate, the pertinent point is if this incremental cost can be offset with the savings from renewable energy which is cheaper than coal and LNG based power. This is the case globally, and should not be different in Sri Lanka.

I have calculated the total opex for the two scenarios – first the CEB’s 2022-2041 generation plan where Sri Lanka maintains 50% renewable electricity across the full planning horizon of 20 years, and second, where Sri Lanka reaches 70% renewable electricity by 2030 and continues to add 1.5% per annum. Second scenario was modelled with moderate costs for coal and gas and at the current costs (which are higher).

The defence of the rejected CEB generation plan 2022-2041

The last two pages of the letter is a defense of the CEB generation plan, now abandoned for not meeting policy. While a lot of content deserves rebuttal, I focus on one statement that begins with “CEB was to first make the grid ‘carbon neutral ready’ before bringing in large scale RE integration…”

Try as I might, I couldn’t see carbon neutral readiness even in 2041 – the last year the plan represents.

As per current policy gazetted in 2019, Sri Lanka must become carbon neutral in 2050. Even in 2041, the generation plan shows 50% of electricity will come from fossil fuels – no change from 2022! No battery storage planned, no grid forming inverters – just a massive expansion of fossil fuel plants! If I extrapolate the CEB generation plan to 2050 carbon neutrality, I get the following image (Figure 3). 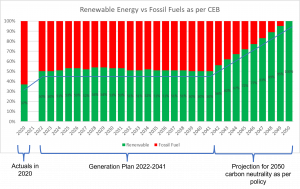 Keeping the renewable energy percentage static at 50% till 2041 and pushing for 100% in the next nine years doesn’t make any sense. This will force closure of 1.1 GW of gas powered power plants planned between 2039-2041 – in less than 50% of their useful life – called stranded assets in the industry. Herath somehow forgot to include the loss of these and other stranded assets in her calculations – easily a couple of billion dollars by itself.

This is the year 2021. The financial, socio-economic, and environmental benefits of renewable energy are globally understood, along with technology to integrate even 100% variable renewable electricity to a grid. A senior utility official is still talking down the global energy transition shows how outdated our utilities sector has become.

It is time we put these nonsensical arguments to bed, once and for all.

The new CEB GM M.R. Ranatunga has openly spoken positively of renewable energy and energy transition, the first CEB GM I have seen to do so. I hope he will embrace the opportunity to support the country’s development through low-cost renewable energy. This is the future of Sri Lanka and the CEB.

The letter sent by CEB GM N.W.K. Herath to the Secretary of the Ministry of Power can be viewed here: https://energyleakslk.wordpress.com/2021/09/07/ceb-gms-letter-to-secretary-of-power/

June 30, 2021 byMihi Perera No Comments
A special policy dialogue on the challenges faced by the differently abled community and the strengthening of their rights within a legal framework was held online on the 28th by the Women Parliamenta

July 30, 2022 byRuwani Fonseka No Comments
The highest number of filling stations using the National Fuel Pass QR system in a single day was reported on Friday (29) with 657 stations using the platform, Minister of Power and Energy Kanchana Wi