The Chess Corner by Dulan Edirisinghe: Don’t trust your opponent!

Today we start with a training position for the reader to analyse. 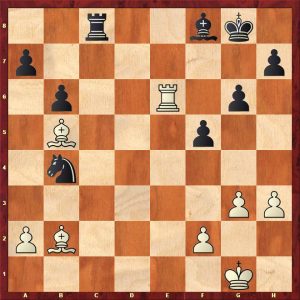 Black is up a pawn but white has two bishops. Calculate 1… Rc2 2.Re2 Rxe2 3.Bxe2 Bc5 and assess black’s winning chances. More about this at the end of the column.

It is quite interesting to observe games when one side is quite a bit higher rated than the other. The lower rated player is often infected with the “rating-fear disease” and sees shadowy threats when there is none. He also sees a deep sacrifice when the opponent has blundered. If things get tough, he gives up – fully accepting the self-fulfilling prophecy of doom. In short, the lower rated player often gets manipulated like a muppet due to the one way delusions caused by his fear and paranoia.

Rather than the lack of confidence in your own ability, the main factor at play here is the misplaced confidence in one’s opponent’s powers. Surprisingly (for us mere mortals) , this happens when Grandmasters play each other as well. After all, they know how good each other is. The most celebrated such instance is discussed in Alexander Kotov’s classic Think Like a Grandmaster. 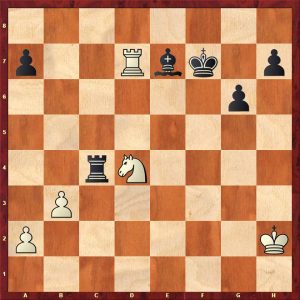 Viacheslav Ragozin, the infamous sparring partner of the great Mikhail Botvinik and a former World Champion in correspondence chess, was up a pawn as black in this position. But his rook and the a-pawn are under attack, and his bishop is pinned. He found a move that will ‘solve’ all his problems.

1… Rc7??, the “perfect solution”. He thought after 2.Rxc7 Bd6+ he could save the rook, save the a-pawn and even threaten to enter a winning Bishop versus Knight ending.

Except that the black bishop would be pinned and cannot move!

Ragozin simply did not see the pin, so he was absolutely convinced that 2.Rxc7 would lead to a winning endgame for black. In such instances, that certainty has almost a mind-controlling effect on the opponent, who will most likely succumb to the illusion that he is presented with. Ebralidze got totally immersed in this false reality and played 2.Rd5. Ironically, after only a few moves (2.Rd5 Bf6 3.Nb5 Rc2+ 4.Kg3 a6 5.Rd7+ Ke8 6.Rc7 Be5+), he ended up losing the game due to the very thing he wanted to avoid earlier – the black bishop attacking his rook and king.

When everyone held their breath for a minute

There is a more recent and an almost legacy-defining example as well. With the 2014 World Championship poised at 2.5-2.5 after five games, Magnus Carlsen was well in control of game six. That’s when this happened. 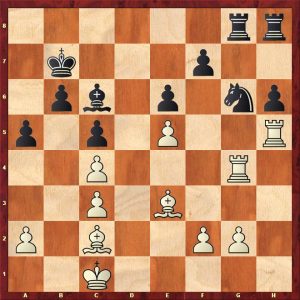 Up until this point it has been a typical Carlsen grind. Early exchange of queens lead to a slight but nagging advantage for white, followed by slow maneuvering to create weaknesses in black’s kingside. The next part of Carlsen’s plan was to bring the white king to the kingside. So he played 26.Kd2.

This seemingly ‘natural’ move in an apparently very safe position presented black with a golden opportunity to turn the tables with 26…Nxe5 27.Rxg8 Nxc4 28.Kd3 Nb2+. The whole chess world held its collective breath for 60 seconds until the unsuspecting Anand calmly responded with 27…a4, adding yet another celebrated case of mutual blindness to the history books.

What was notable in the video footage was that Carlsen immediately recognized his mistake. When recording the move, he wrote ‘K’ and ‘d’ first and then froze. It was only after six seconds that Carlsen wrote the ‘2’. 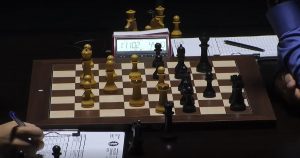 Carlsen won the game and never relinquished his lead in the World Championship. Anand summed it up later with “The thing is when you’re not expecting a gift sometimes you just don’t take it.”

Regarding the training position we started with, the actual game (Czebe – Humpy 2001) continued 1…Rc2 2.Re2 Rxe2?? 3.Bc4#. Well, never trust what your opponent (or chess columnists) tell you. Always seek the truth by yourself.

Williams into US Open final as she eyes Court’s record

September 7, 2018 byMalik No Comments
Serena Williams has another shot at winning her first Grand Slam title since giving birth after defeating Latvia's Anastasija Sevastova in 66 minutes in their US Open semi-final.

August 30, 2018 byRevatha No Comments
SLC T20 League round-robin stage comes to an end in Kandy. Will it be a Colombo versus Dambulla final on Sunday?