Chess and checkers share an interesting yet somewhat complicated relationship. Even though the two games are played on similar checkered boards, the strategic aims are completely different. Chess derives most of its complexity through piece-differentiation while checkers is more about the piece-coordination.

The common perception, of course, is that chess is a far more strategically superior game than checkers. It is chess that is often used in commercials to emphasize the wisdom of a person or to underline the depth of a business strategy. Politicians go to great lengths to convince followers that they are “playing chess, while the other side is playing checkers”. Even the late basketball great Kobe Bryant once said, “These young guys are playing checkers. I’m out there playing chess”.

All this means is that “chess vs checkers” has become standard shorthand for suggesting someone is smart, or not. Checkers, however, has its own charm and can teach important lessons.

In checkers, a combination would typically involve a player sacrificing a piece or two, and getting them back with interest. This is often dramatic, because unlike in chess, a player can capture many pieces in a single turn. Also, captures are mandatory in checkers, so it is not easy to replicate this type of combination on a chessboard. Here’s a delightful example. 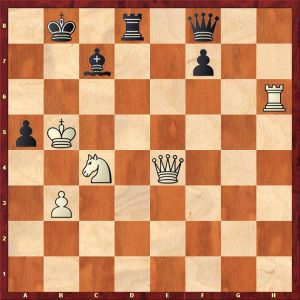 White to play and win (From a study by Leonid Kubbel) 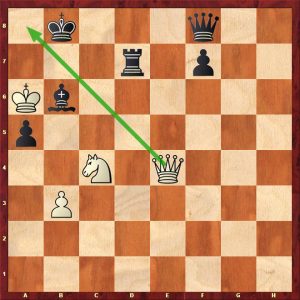 White has the stunning 3.Qa8+!

A similar combination once happened in the highest echelon of the game as well. 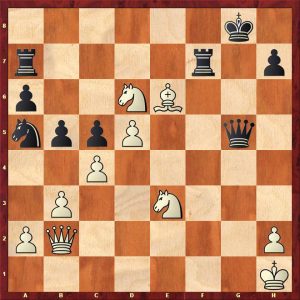 Petrosian finished off his illustrious opponent with one of the most beautiful combinations ever seen in a World Championship. 29.Bxf7+ Rxf7 30.Qh8+! 1-0 (30…Kxh8 31.Nxf7+)

Simplicity can create chaos too 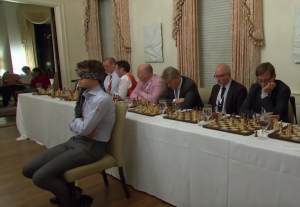 Here’s a fact that might startle you. When it comes to blindfold simultaneous exhibitions, the chess record is held by Timur Gareyev who played 48 such games (and won more than 80%) in 2016. Curiously, the record for checkers is only 32 games. How can that be? If chess is far more complex, why is it harder to keep lots of checkers positions in mind?

The reason is better explained using a famous anecdote of an incident which may or may not have happened.

A grandmaster once went to a small chess club in a village and gave a 10-board blindfold simultaneous exhibition. As dictated by tradition, he was given white pieces on all the boards. He started with 1.e4 in some, while playing 1.d4 and 1.c4 in some others. Unknown to him, the villagers had devised a cunning plan.

If you consider yourself superior just because you play chess and someone else plays checkers (the meaning does not necessarily have to be taken literally), perhaps there is a lesson in there somewhere.

Had plans to keep Ausy under a good total: Bhanuka

October 28, 2019 byTSM Web Desk No Comments
Almost everything that could go wrong, did go wrong for Sri Lanka in Adelaide. And the one thing that went right for them, turned out badly.