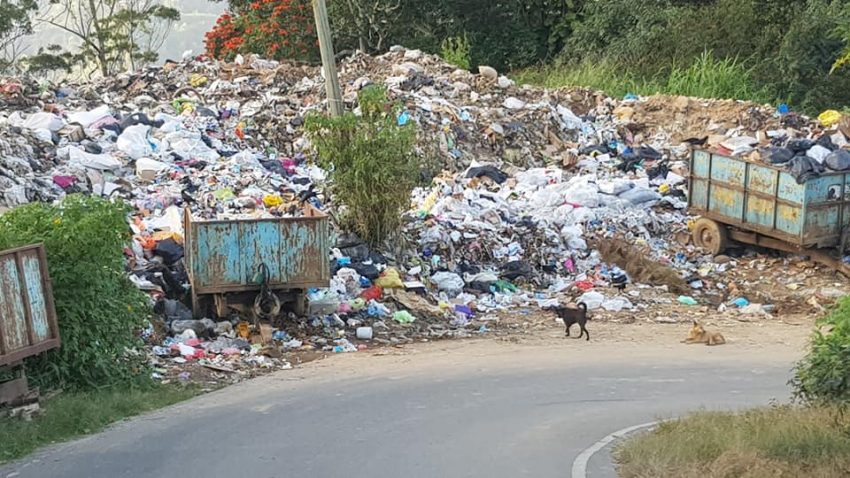 One of the most popular tourist destinations in Sri Lanka and home to around 55,000 people, Ella entertains about 4,000-5,000 local and foreign tourists on a daily basis. In order to cater to their needs, over 100 hotels and accommodation facilities have been established in the area. However, the garbage generated from these tourist establishments as well as households is not properly managed, thus giving way to a massive garbage dump on the roadside of the Ella area.

Several photos of the garbage dump in Ella were widely circulated on social media last week, with one of the posts, which was shared over 4,000 times, catching many people’s attention.

The garbage issue is not only affecting Ella but the whole county. And Ella, being a tourist hotspot, is now turning into an eyesore to many travellers because of this garbage issue. The area where the garbage is piled up at present was originally established to manage waste; several units had been built to segregate the garbage and start a composting project.

Speaking to The Sunday Morning, Ella Pradeshiya Sabha Chairman Amila Basnayaka stated: “The garbage generated from the residents of the area as well as all these tourist hotels and accommodation facilities is dumped in a 10-perch plot of land. The said recycling centre was established in 2009 to match the requirement at the time, but it surely cannot cater to the requirements of today. The recycling centre was actually established to compost perishable garbage.”

The solution for this is to find a separate plot of land allocated for this purpose to which the garbage can be moved, so that the compost processing could commence, Basnayaka opined. He added: “We are looking to purchase a suitable plot of land to commence the garbage processing, but due to the lack of funds at the Ella Pradeshiya Sabha, we are looking for the Government to mediate and make suitable arrangements.”

Basnayaka estimated a cost of Rs. 50 million in order to establish a proper compost processing unit, which should be allocated by the Uva Provincial Council as it is beyond the budget of the Pradeshiya Sabha. Apart from that, the project would need a five-acre land area to store, segregate, and process the collected garbage.

“We are in the process of securing a plot of land to commence the project, but we are awaiting clearance from the Forest Department. We have earmarked a land in Karandagolla in Madugastalawa, which is situated in a very dry weather area and is scarcely populated. Ella is not suitable for a composting project since it has a cold atmosphere,” Basnayaka elaborated.

The preliminary assessments have already been conducted for the selected land area, with an environmental impact assessment (EIA) also being carried out and cleared by the National Building Research Organisation (NBRO) and the Central Environment Authority (CEA).

“It would take at least another year for us to completely move this garbage dump from the current area to the new location. We are hoping the Forest Department would grant us the clearance in the near future. Until such time, we have suggested that an abandoned quarry in the Ethulkanda area be used to bury the existing garbage that is being piled up on the roadside,” Basnayaka stated.

The land in the abandoned quarry in Ethulkanda is said to belong to a regional plantation company (RPC), and the Ella Pradeshiya Sabha is hopeful that they would release the land for the purpose of burying garbage there.

“After seeing the social media post, the Secretary to the Governor of the Uva Province too visited the area and said that while we wait for permission from the Forest Department to start using the five-acre land in Karandagolla, steps will be taken to at least move the existing garbage to the abandoned quarry in Ethulkanda,” Basnayaka informed.

With insufficient facilities to process and manage the area’s garbage, the biggest impact would be felt by the trade and tourism industries in Ella.

The Sunday Morning spoke to Tourism and Commercial Association – Ella Chairman Malith De Silva as to what steps their association has taken over the past years.

“This is not a new issue that we are facing. The garbage dump has been growing for the past 10 years. We have made several complaints to the previous President, Prime Minister, Minister of Megapolis Development, Chief Minister of Uva Province, and the Governor of Uva Province. We even took the previous President to the garbage dump when he visited Ella, but we did not get any solution from them,” he stated.

De Silva also revealed that even when the recycling/composting project was to be established, the residents from the area, including the establishments of the tourism and trade industries, had strongly opposed the move.

“We have stacks of letters which we wrote to all the authorities requesting to stop the project as it was not suitable to the area. The hoteliers of our organisation took measures to segregate their garbage. However, when the garbage is collected and taken to this spot, they dump everything together,” he added.

De Silva too was aware of the fact that a new location had been requested and that the Forest Department is yet to grant approval for the selected plot of land.

Sliding towards a grave disaster

September 27, 2020 bythemorningeditor1 liberty No Comments
Following the catastrophic disaster reported last week of a building in Kandy collapsing, concerns were raised over all illegal and hazardous constructions mushrooming in landslide-prone areas,

April 4, 2021 byNews Admin No Comments
Thousands of innocent villagers, especially in the Northern, Eastern, and North Central Provinces are holding protests to raise a collective cry against the longstanding issues related to the microfin