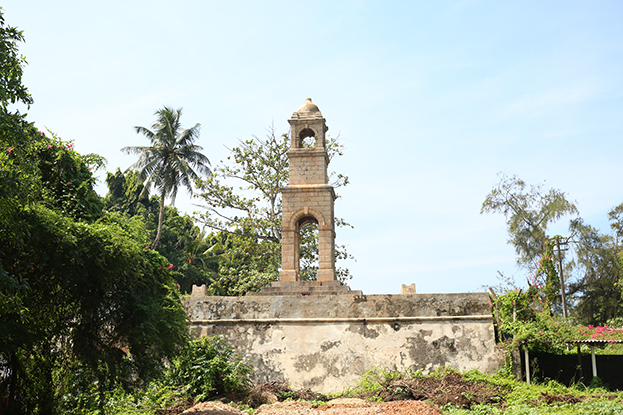 The Dutch when in Negombo

Negombo – sandy beaches filled with tourists, great hotels, wonderful people, a lovely variety of cuisines, and all in all a hub of tourism in Sri Lanka. One goes to Negombo to enjoy the sun, have a swim in the great Indian Ocean, and have a relaxing holiday. It is a popular location for short breaks from the busy life and an easy location to get to if you live in and around the Western Province. While the commute is short, shiny new roadways such as the expressway which connect most of the bottom half of Sri Lanka, have made it even easier to get there.

While Negombo is a wonderful beachside location, our island is not in the least lacking of beachside locations. Negombo can for instance be compared to Jaffna, which too, is an excellent sunny area with plenty of places from which you can observe the ocean. To add to it, Jaffna is filled with a many great sites of historical and cultural importance. And what about the blue, blue sea of Trincomalee? Another lovely location from which you can enjoy the Indian Ocean.

The greatest trial in visiting these areas is the great distance which must be travelled. However, there are indeed many other popular blooming tourist destinations which can easily be visited by those with access to the expressway.

Take Galle for instance. Galle used to take a trying amount of time to get to from Colombo, but now, one can commute to and from within the span of a few hours. Further, Galle too comes with an awful lot of historical sites and monuments which would be viewed with great marvel and instil in us great knowledge of our past and how our culture has been shaped.

When looking at it that way, it may seem that Galle would be a better place to visit, especially with all the history and culture it holds. However, while the answer to this may be subjective, there is enough reasoning to put Negombo up in the list, perhaps even at a rank equal to this famous cultural hub.

One thing which makes places like Galle and Jaffna extremely popular are the formidable monuments that were erected by the foreign invaders of Sri Lanka. The Dutch Forts in both these locations have made them among the most-visited places in the country, mainly among locals. Digging a little deeper, one would find that hidden away in a corner and adorned under a veil of disguise, another one of these Dutch forts lies incognito in a corner near the Negombo Lagoon.

Its alias is the Remand Prison and old District Court of Negombo which has been functioning with this purpose for a very long time. “There have been a great many amount of well-known and exceedingly talented lawyers who have practised at this court,” said a senior citizen of Negombo who recalls seeing proceedings in the old building when it functioned exclusively as the District Court. “Talented men like Dr. Colvin R. de Silva have practised there.” What he and most elderly people now residing in Negombo can remember is how the building functioned as a District Court, with the prison right next to it.

High Court Registrar Gayani Silva too shared some details about the place in these terms. She mentioned, interestingly, that during the time it was in operation, the court even heard the case of “Saradiel”, the famous Sri Lankan Robin Hood.

She also had some piquing details to share about the architecture and archaeology of the place, stating that there were even tunnels underneath the structure, which is always interesting to us as we love mystery. She said she believed that these were used for the Dutch to easily get to sea, but our senior citizen, who confirmed their presence, remained of the belief that these were used as prisons – consequently, the place’s current purpose – by the Dutch.

Disappointingly yet understandably, a great deal of procedures must be followed, including getting permission from the District Court Judge to visit and photograph the inside of the building. When doing this, one must always remember to take note to always dress formally and modestly as per the dress codes in government offices.

Nevertheless, the ears too can help collect data, not simply the eyes. Hence, speaking to those who have seen this too can give us the information we need.

Although the residents in the surrounding areas cannot recall much about the building and its archaeology and history, they are quite aware of the fact that the place is historical and is of some significance.

The simple fact is that most people are so used to it being a prison that they forget its wonder that lies right before their eyes. The building is known to be a location where the law has been enforced for so long, and this covered the fact that it was initially a prime location where the Government or ruling body maintained the functioning and safety of their regime. At the time of its erection, Dutch representatives and military men were attempting to capture the island and colonise it as a part of their imperialist scheme.

The fact that the building was built by the Dutch makes it rather evident that the place is a very old site and indeed, some time back, the Archaeological Department of Sri Lanka themselves identified this. Hence, the Prison Complex is classified as an Archaeological Protected Site.

The need for protection and the value of the building is in fact quite obvious when looking at it, as right at its entrance stands the great entryway in traditional Dutch architecture, which we can see when we observe the Dutch Forts in both Galle and Jaffna.

The senior citizen shared: “If you look up at the arch in the entryway, it displays a year – something from the 1600s.”

Indeed, he is right. It’s carved in stone that the structure was put up in 1644. There is more history to this, another knowledgeable and elderly citizen of Negombo was kind enough to share. It seems that this location was actually selected by the Dutch as a result of a pre-existing fort in the exact place. This was a fort not put up by the Sri Lankan locals but rather, was one built strategically by the Portuguese, whose influence in the city of Negombo is not unknown as they were famous for having established themselves along the coastal areas of the island when they too were attempting to take over the country back in the 15th and 16th Centuries.

The need to preserve

When asked the people around if they knew of any European culture affiliated with the place, they were also kind enough to point out a church nearby, which was reminiscent of the Dutch Church found right near the Fort in Galle.

However, on further inquiry, it was found that the church was in fact an Anglican church. Of course, this can sound a bit confusing to someone who would think that the location was of importance only to the Dutch and perhaps to the Portuguese before them, but no – it seems that Negombo was important to many foreigners back then just as it is now.

When the British were ridding the land of the Dutch in order to take over the island and make it part of their Empire, they had at the time taken over the Fort and did what they could to make it their own. However, although they have fiddled about with trying to change the religion of the people, they had not indeed tried to change the architecture of the Fort as they have not with the ones in Jaffna and Galle.

This damage was the reason behind the change of the location of the District Court to a building a few metres away, back in 2013. Now, the District Court functions simultaneously with the High Court and Magistrate’s Court in one structure.

However, the Dutch Fort of Negombo still functions as a prison and the effects of neglect are visible. This is a sad fact indeed when considering how valuable the location is to the field of Sri Lankan Archaeology and how deserving it is of the same recognition as the Dutch Forts in the other two locations.

Those who care have tried many times to arouse concern and inspire some change in the policies regarding this place, but their efforts have never been enough. One option is to increase the amount of tourist visits here, which would then give the Government reason to look in its direction. This wouldn’t be all too difficult as Negombo is already an exceedingly popular tourist destination. It would of course also be nice if Sri Lanka’s local tourists can be a little more vigilant and aware of it too. What this location, the third of the trio of Dutch Forts in Sri Lanka, needs is a little more publicity and care to shine bright like its two other counterparts.

Keeping it together: Coping with the third wave of Covid

May 4, 2021 byNews Admin No Comments
Once again, fear is taking over the emotions of many Sri Lankan citizens with the concerning talks of a third wave. With the number of cases nearing almost 2,000 a day, it is no surprise that many hav