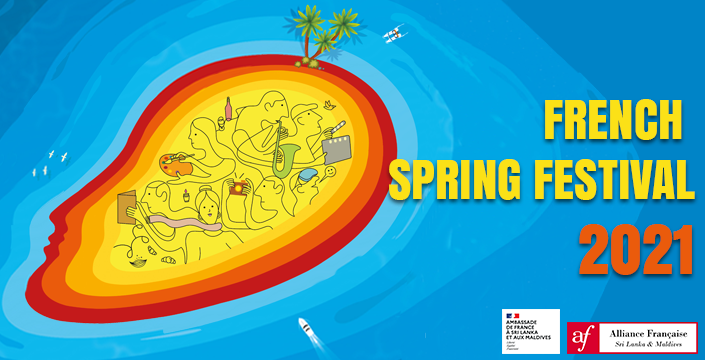 The French Spring Festival 2021: A literary encounter with Olivier Weber and Ashok Ferrey 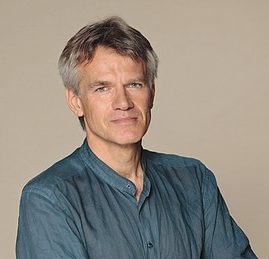 The French Spring Festival is a multi-disciplinary festival fostering artistic links between France, Sri Lanka, and the Maldives since 2012. Organised jointly by the Embassy of France in Sri Lanka and the Maldives, the Alliance Française de Kotte, and the support of their partners, the French Spring Festival presents a wide series of events showcasing the innovative and modern initiatives carried by French, Sri Lankan, and Maldivian artists and intellectuals.

The ninth edition of the French Spring Festival in 2021 will be dedicated to explore this theme, showcasing a range of different insularities that vary by their size, position, culture, and conceptual understanding.

Due to the current sanitary situations, all events will be virtual and free. At a time when the sanitary context is encouraging us to rethink the ways to support artists, they wanted to showcase that creation continues to take place amidst adversity.

​Ashok Ferry and Olivier Weber will be participating in a discussion today (29) at 7 p.m. on how insularity affects literature, by confronting both the French and Sri Lankan perspectives on writing and insular perspectives.

Bestselling Sri Lankan author Ashok Ferrey forged a career as a builder in London before becoming a writer. Author of seven books, his first two books of short stories – Colpetty People (2005) and The Good Little Ceylonese Girl (2006) – were both shortlisted for Sri Lanka’s Gratiaen Award. His third book, the novel Serendipity (2009), part satire, part thriller, was shortlisted for Sri Lanka’s State Literary Award. The Ceaseless Chatter of Demons (2015) was nominated for the 2015 Gratiaen Prize. This satirical fable, which confronts eastern tradition and European modernity, is his first novel translated into French, published by Mercure de France. Only 10 novels or books of fiction from Sri Lanka have so far been translated into French, mostly from English. The Unmarriageable Man is his latest novel, published in 2021 by Penguin Random House India. 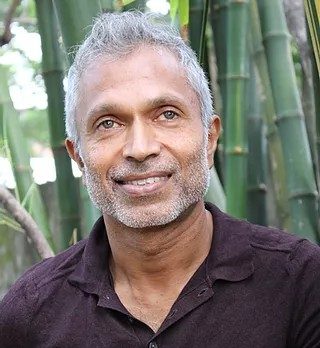 Back in Colombo, Ferrey continues to design and build houses. He is also a guest lecturer at the Colombo School of Architecture and host of the programme “Art and Architecture with Ashok” on national television. In his spare time, he is a personal trainer.

Brunch had a chat with Ferry for some insights into his discussion.

Ferry informed us that they will be discussing aspects of the island, as the theme is “The Island”. He commented that there are many words for “island” like insularity to mean the state or condition of being an island. “All these words have some element of closeness about them. So, we’re actually going to be asking each other what does isolation and insularity mean and then question whether all islands have this, or is it just some,” added Ferry. He also informed us that Olivier Weber has been all over the world; he reported on many things all around the world, adding that he himself has lived in Sri Lanka up until the age of eight and now he is back.

During this discussion, he will talk about his take on being a writer on an island and will go into detail about various aspects of this concept. “One thing that always struck me was when I was in Europe living in England, which is an island. It is a similar thing to living in Sri Lanka, but the moment you went to the continent, you could actually drive from France to Spain, Austria to Italy.”

He explained that one was able to simply get on a bus and go and one might be stopped and have their papers checked, but one didn’t have to change their method of transport. “For me, coming from an island, it is a source of wonder that one could just go from country to country,” he commented.

For Ferry, growing up in Sri Lanka meant that you couldn’t really go anywhere else without a great deal of troubles. “You had to get on a flight. You couldn’t just drive across the bridge. But that is what it is to be a writer on an island.”

He also informed us that he will be asking Weber what makes an island special to him, because he’s travelled all over the world. The main objective of this discussion is to establish whether there is any concept of isolation or insularity; both those words come from the word violence. They will explore whether that is all there is to being an island, or is there more, and question what the positive ideas or one of the negative ideas are, and so on. Aside from this, Ferry added that they will go into depth about each other’s work as well.

The conference will be on Zoom, and also live streamed on the French Spring Festival Facebook page. The replay will be available on the Embassy’s Youtube channel.

How to be a fashion icon in your everyday life

October 10, 2018 bythemorninglk No Comments
Dulasha focuses on comfort, simplicity, trend and class, and not just the newest style. She says: “Self-identification plays a major role in fashion too, because what you wear on the outside will port

August 5, 2020 byJennifer Anandanayagam No Comments
“Deviyan Wahanse” is the new short film by Zeeshan Akram Jabeer. It’s a story about Anton, our protagonist; his life, his livelihood, and if you are to look a little bit deeper, about faith.