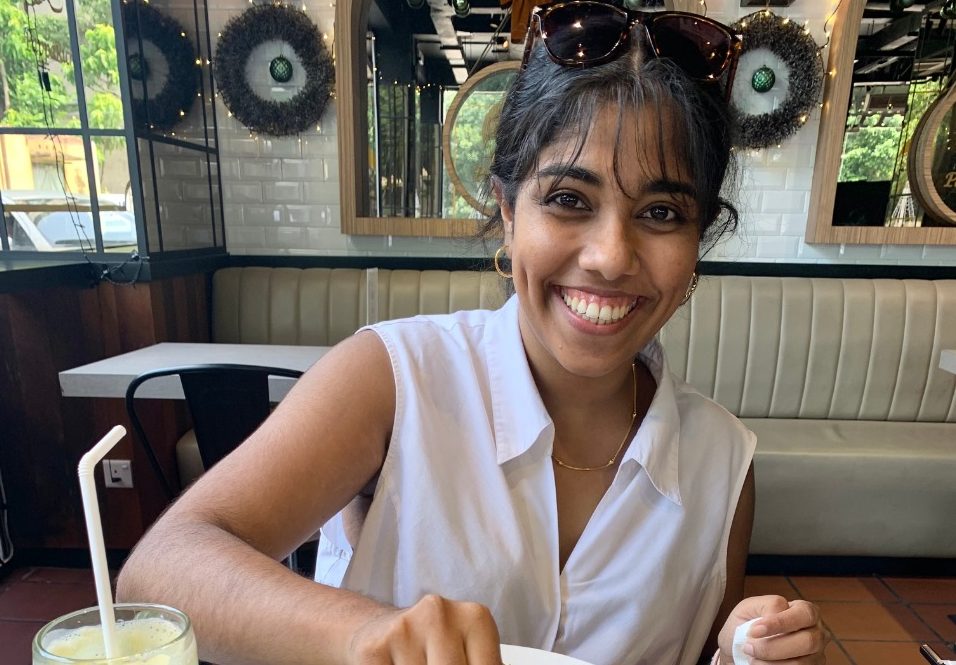 The girl in the white saree: Gangulali de Silva Dayarathna

The title is quite fitting, as Gangulali said – she is often spotted in a white saree so she is the girl in the white saree! Gangulali is currently a legal apprentice and a final year law undergraduate at the Faculty of Law, University of Colombo. She is one of the most inspiring people I have had the chance to speak with about her many journeys in life through both her profession and voluntary work. She hopes to continue to learn and become a lawyer but also travel the world at some point. Aside from being a rockstar in that sense, she also enjoys cooking at home and eating out! We love that. We are all foodies here, that is no lie. Before I give away too much information, I am going to let you have a look at the conversation we had a while back for yourself.

Hi Gangulali. Before we get into it, tell our readers a little about yourself.

Hi Mahika! I am 24 years of age. My family has four – my mom, dad, my brother Sisilal, and myself. My mother is a legal professional, my father is a businessman whose favourite activity is cycling across the country, and my brother is an undergraduate of the University of Liverpool, UK. I come from a village named Dunagaha.

I am currently enrolled as a legal apprentice, while being a final year undergraduate at the Faculty of Law, University of Colombo. I also studied at Sri Lanka Law College and I schooled at Holy Cross College in Gampaha. I was one of Sri Lanka’s two youth representatives to the United Nations (UN) in 2019. I am presently acting as the Co-Lead Researcher for a research project on Personal Medical Autonomy, done by the Asian Law Students’ Association (ALSA), in collaboration with the Asian Medical Students’ Association. At the same time, I am the Editor-in-Chief of the National Chapter of ALSA and a member of the research team for the Yeheliya Foundation. I have worked as a debating coach, mooting coach, and bilingual media reviewer. I am an author and an avid speaker. I cook during my free time, love photography, and love dogs too.

What inspired you to go into law?

My mom. I was apparently crawling around in her chambers when I was first exposed to the legal practice. She works 12 hours a day and I hear so many experiences of hers, which made me want to explore that world. This was later inspired when I started believing that our legal system could do better. We need improved laws, honest practitioners, and fair individuals who support the process of justice. What better way to improve it than to be a part of it? The practice of law is founded on the fact that we take up the problems and burdens of people and what we do is we help them, ease their pain, and give them hope. I find the capacity a lawyer has to handle this multitude of objectives, fascinating. I saw this in my household on a daily basis, especially when it came to some pro bono matters my mom took up, and I wanted to be a driving agent.

So, how was law school? Tell us about the experience!

Exciting! I dreamt of entering the Faculty of Law since I was 13. The state universities consist of different individuals from all across the island and I believe this offered me the opportunity to understand their difficulties and mentalities. A major part of our studies was research based. This undoubtedly improved my skills. I was at the same time introduced to English debating and mooting for the first time and went on to being appointed as the Vice President of the Moot Court and Debating Society. I represented my faculty in many regional and international tournaments, including the World Universities Debating Championship 2020 where I was firstly a panellist and was then elevated to Chief Judge in the Preliminary Rounds. I was also a member of the teams that became semi-finalists at the National Law School Debates, Bangalore, the semi-finalists at the 4th SAARC Law Moot, India, and the national champions at the Philip C. Jessup Moot. At Law College, I worked as the Vice President of the Equality Initiative and the Drama Secretary for the English Literary Association.

Ragging in state universities is something I had to experience first hand. I mostly went through verbal and mental ragging which severely traumatised me. I was at the verge of leaving law school but my parents and the faculty administration acted promptly. My desire to change this culture later led me to co-facilitating the #stoptherag campaign done by the Rotaract Club of the faculty. All in all, I believe that my law school experience exposed me to a novel learning process and made me a better version; on how to deal with different perspectives. It was strenuous but rewarding.

Any advice for aspiring lawyers?

Don’t let what you experience define you. There is no space in this profession for your personal motives. When you take your oath, you take a stepping stone into social engineering. It is your choice on how you utilise it but it is necessary to remember that the legal profession is a noble profession and there is a sanctity to preserve in it.

Aside from being a legal apprentice now, you were also a youth representative to the UN. How did that come about?

Yes. Being a Youth Delegate to the UN was an amazing opportunity and I consider it a small reward for the ground-level work I did. Sri Lanka sends two youth representatives each year to the United Nations General Assembly (UNGA) in New York and I was one of them for the 74th UNGA. The selection process is generally three phased; it consists of three interviewing panels that include experts in the field and government representatives. I applied for the opportunity twice and succeeded at the second attempt. During selections, they test your background work, understanding of youth issues, policy-making capacity, language proficiency, and speaking abilities.

I was initially doubtful about applying since it seemed like a massive responsibility, but thanks to my wonderful support system – my parents, brother, cousins, boyfriend, and close friends – I was able to do it. And I am extremely glad that I did!

What did being a youth representative entail?

My primary duty was to represent the Sri Lankan youth at the UN General Assembly and make the youth statement. At our session, Amrit Edirisooriya and I spoke of aspects such as youth unemployment, volunteerism, social cohesion, and reconciliation. In highlighting solutions taken by the Government, we spoke in detail about our welfare policies and programmes. The representation to the UN also involved partaking in other sub-discussions hosted by youth delegates of other nations. Here we were able to discuss common issues and learn about the different approaches of different states. It was enthralling to hear that Sri Lanka was part of the 5% of countries outside Europe that sent youth delegates to the UN.

Our representation to the UNGA was productive since we actually approached the UN Resident Co-ordinator and a representative of the Ministry of Youth Affairs before leaving for New York. During these meetings, we learnt of many government initiatives to address youth issues and at the same time, we were able to convey our solutions to them. This was a first-hand experience that I treasure.

Upon returning to Sri Lanka, I was invited for many youth discussions. A majority of them were focused on awareness on issues such as gender-based violence, ragging, domestic violence, and climate change. Moreover, I took part in timely discussions such as the youth role during Covid-19. I also spoke to many interested youth ambassadors during the National Youth Dialogue by the United Nations Development Programme (UNDP) and the launching event of Hype SL.

I am currently in the process of formulating a paper of recommendations on how to cope with ragging. My intention is to forward it to the relevant government bodies and hope that improvements are made in this aspect.

My journey on voluntary work started when I was 12. I came across many kids in my village who needed help, financially and otherwise. After gathering my cousins and a few friends, I formed an organisation named “The CHILD” and registered it. Initially we had no major idea on what to do. We did small projects like holding concerts and selling bookmarks to collect funds. Luckily, some of my mom’s foreign clients reached out to help us. With that financial aid, we built three houses for homeless families in our village. We organised many motivational and awareness lectures for students and parents. Surprisingly, these lectures saw the participation of a large number of families. At the same time, we donated to children’s homes, elders’ homes and assisted studies of students in low-income families.

I later took up doing motivational lectures at schools and worked with an area-based project group that conducted medical and awareness sessions. Presently, there are very little instances where I physically engage in projects. But during the past year, I have been a speaker for many sessions and I believe that I have contributed knowledge-wise. I have extended financial aid to few selected persons and aided islandwide projects in moments of crises.

Any stories for us?

Plenty actually. I was once on a tour to Trincomalee with my family and cousins. I cannot recall the name but my father insisted us on this journey by boat where we visited an island with a monastery on top of a rock. The walk to the rock was through a jungle and it was quite the strenuous journey. We were guided by two navy officers and they made it very clear that we need to return before 2 p.m. because the elephants start lurking around. There was actual evidence near the monastery of elephants treading! Well, it was almost 3 p.m. when we left the monastery and while we were climbing down we could hear an elephant trumpeting really closeby. As worried as we were, our objective was to get to the boat as fast as possible. A navy officer with a rifle took the lead. My cousin sister got so worried; she lost all nerve to walk so we had to basically carry her. We did not hear the end of it from my mom for about three days. Interesting story since we survived!

Do you have any words of wisdom for youngsters looking to get into voluntary work in Sri Lanka?

Knowledge is power. I cannot emphasise enough how important it is to learn for yourself and also help others learn. There is volunteerism that helps society in multiple ways. But something I have noticed is the difference of issue-based awareness in different societal stratum. Societal differences are inevitable. It is important that we reach out to all these levels if our long-term objective is to eradicate certain issues. For this, awareness and dialogue among all levels is important. Hence if you are focusing on volunteerism based around social empowerment, reach out to those whom you believe need it the most. Because as much as we reach solutions, those solutions have to be all inclusive and should cater to everyone.

What is happening with GameStop? : A beginner’s explanation to one of the most bizarre events in Wall Street history

February 7, 2021 byPavani Jayasinghe Munagamage No Comments
You may or may not have heard about this particular incident sometime in the last week or so, but I imagine that many of you would have come across it at some point since it has quickly become one of

April 19, 2020 byKusumanjalee Thilakarathna No Comments
Charlie and the Chocolate Factory is an amazing book by the famous children’s author Roald Dahl adopted, which was adapted into a movie.