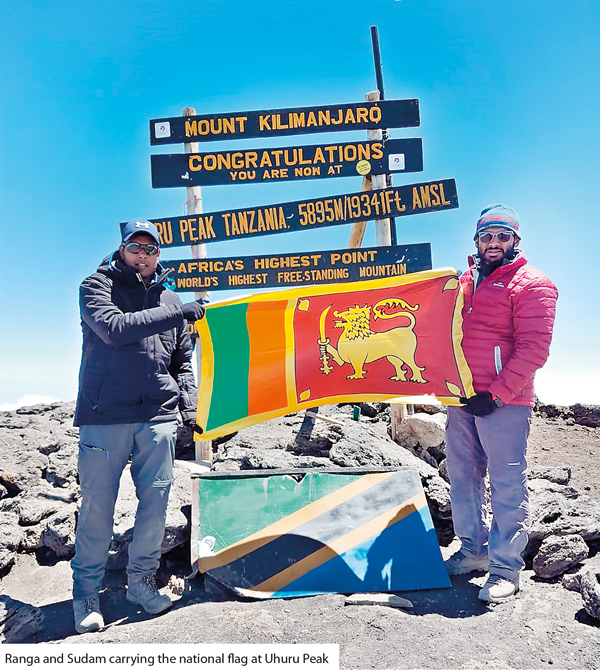 The journey of two brothers who trekked Kilimanjaro 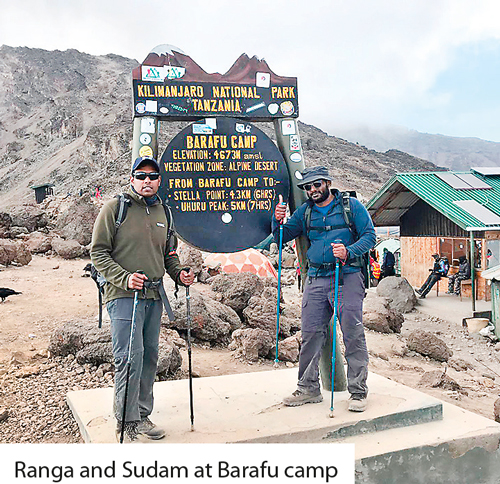 Mount Kilimanjaro, which is a part of the Kilimanjaro National Park, is a dormant volcano in Tanzania. It measures up to 16,000 ft. from the base to its summit and is 19,341 ft. above sea level.

The arduous journey of these two brothers-in-law is truly a remarkable one, as they explained to The Sunday Morning Brunch, the sheer determination and willpower it took to trek this mountain.
Commenting on the preparation for the expedition and the measures they took, the both of them noted that one cannot “really prepare to trek Kilimanjaro” as there are no mountains high enough in the countries they reside in. Gamage advised doing “a lot of cardio and mountain climbing and running, especially cardio”. Gangabadarachchi also added to this by stating: “While you need physical training, it’s all about the mental attitude.”

They had been preparing for this moment for over a year and it finally came to fruition on Friday, 16 August. Unfortunately, their time atop the summit was cut short, as Gangabadarachchi explained that they could only stay there for 10-15 minutes as it is very hard to breathe up there due to the lack of oxygen. 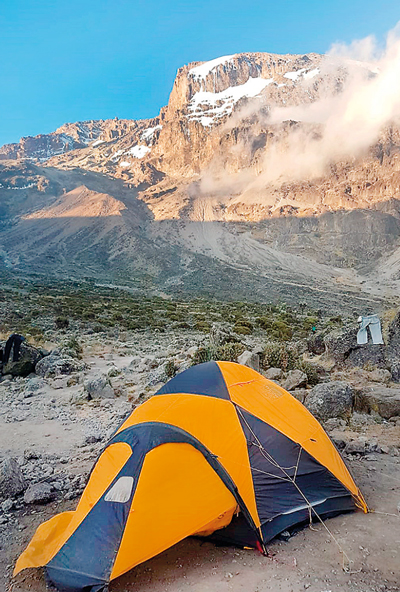 Why mountain climbing and why Kilimanjaro, we asked them. Gangabadarachchi and Gamage have similar interests such as hiking, running, and camping. For Gamage, this eventually progressed into more challenging activities such as running long distances and finally, his desire to climb mountains was birthed.

It was in fact Gamage’s idea to dive into this tedious trek as he vaguely recalled someone mentioning Kilimanjaro years ago, which stuck firmly in his head till this day. Gangabadarachchi, who is a kindred spirit to Gamage, agreed to the trek when he was asked if he wanted to join him.

Gamage ardently added: “My wife was really supportive and usually encourages me to do what I like to do.” Ruwani Gamage, his wife, also accompanied him on various hikes to show her support and encouragement. Gangabadarachchi on the other hand stated that his family was extremely overjoyed and went on to say that it was his father who was especially euphoric.

Apart from it being a hobby shared by the two of them, Gamage had another reason to climb this mountain. He did it in order to raise money for a charity in the UK known as “Reuben’s Retreat”.

This Good Samaritan managed to raise nearly £ 2,000 for the charity. When asked as to why he raised money for this particular charity, he described it as “close to his heart”. The charity was established by Reuben’s parents who lost him when he was just around 23 months old and in order to assist those going through difficult times. “As a father of a six-year-old myself, I couldn’t ever imagine losing my son,” Gamage stated fervently. Additionally, he said: “If I am to do something like this again, I just want to give something back to Sri Lanka.” The gentleman hopes to raise money and awareness around a Sri Lankan charity the next time around.

Commenting on the dangers of such a feat, Gangabadarachchi said that according to their guide, four individuals were reported to have lost their lives whilst trekking Kilimanjaro this year (2019). 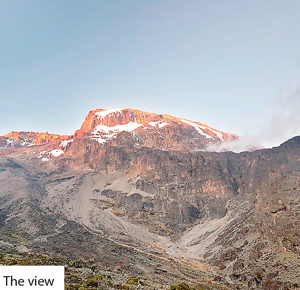 Two of them were foreigners while the other two were part of the support crew. Furthermore, this goes to show that trekking Kilimanjaro is certainly no cakewalk.

As for the challenges they faced on the trek: “It went quite smoothly, the only issue was the headaches as we went up,” Gangabadarachchi candidly replied, adding that they took Paracetamol in order to overcome the discomfort. Gamage also mentioned that the weather was quite good. “It was super dusty which made it a tad difficult. Fortunately, it did not rain as it is dry season in Tanzania.” He added that there are evacuation plans and medical assistance in place. The trek had gone over so swimmingly that they completed it in a mere six days, whereas they had planned it for seven days in which they were to go up for five days and come down for two days.

As they trekked further up, they met many Americans, Germans, and Brits but only a handful of Asians. They both agreed that the journey to the base camp was much easier than from the base camp to the summit. Gamage said it was a “totally different experience altogether. It (the summit) never got any closer the more we kept walking, and that was what was frustrating.” Despite the strain the two youths were put under, they managed to make it all the way to the top by encouraging each other; seeing each other pushing themselves to the limit sparked their spirits.

Gangabadarachchi said: “At the back of our minds we wanted to give up, but our guide kept pushing us…You definitely require a positive mental attitude.” Another motivator for Gamage was his six-year-old son. “I thought about my family and how proud my son would be if I summited; this gave me the strength to go on.” Adding onto this, he stated: “I am also quite stubborn, I wouldn’t forgive myself if I quit.”

Up to the summit

Commenting on the people that accompanied them, Gamage said: “It was just me and Ranga and a crew of eight we employed from Tanzania.” He continued, stating that they made sure the tents were pitched and food was available before they arrived at the camp. They also had oxygen bottles just in case of an emergency, Gangabadarachchi added. However, they were fortunate enough and did not have to use them at all during their trek. The two gentlemen also wanted to mention that the support crew was absolutely wonderful and extremely hardworking as they gave words of encouragement and assisted the two of them on their perilous journey.

“The day we summited, it didn’t really hit us as we were fatigued. After a while, we realised what we had just done and what a great achievement it was,” Gangabadarachchi shared. He also went on to explain that they were contemplating climbing Everest someday, but not anytime soon.

“What is the message you were hoping to spread?” we asked them. “We both are merely ordinary people trying to balance our work life and trying to keep up with our physical health. We aren’t extraordinary,” Gamage humbly noted. Adding to this, Gangabadarachchi said: “Anyone can do this with a bit of physical training and a can-do attitude.” They also wanted to make sure that credit is given where it’s due as they were not the first to climb Kilimanjaro. Nonetheless, the story of their journey is an amazing one worth telling.

November 5, 2021 byNews Admin No Comments
If you are a travel enthusiast keeping an eye out for new and innovative travel content, then it is highly likely that you’ve come across Nadun Tennakoon’s “into the jungle”. You may recognise it as t

Is education a key to economic recovery in Sri Lanka?