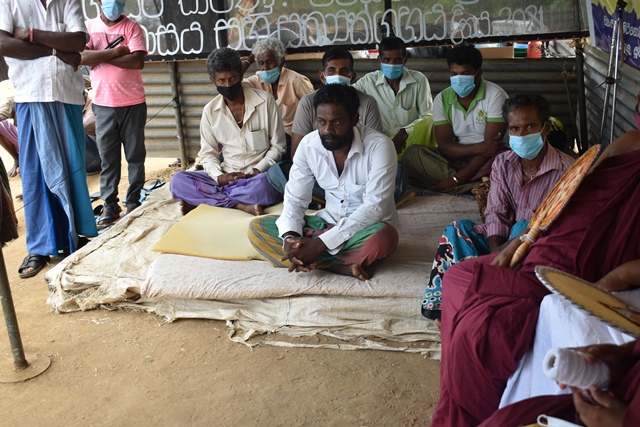 The ‘live and let live’ protests of Walsapugala farmers

“This country can never be developed as long as there are environmentalists.”

“Can we eat oxygen?”

“Those who come to our villages and speak against development think that development should only be for Colombo people.”

“Development is an act of conquering the environment for the benefit of humans.”

Before being judgmental about this justification, we need to look into the history and consequences of this justification. It will be useful to locate in a larger map, the specific issues and ideas that have been expressed in order to support the destruction of nature in the name of development.

Although this notion has become our general knowledge in our everyday life today, it has not been the same throughout human history. It had arisen in a certain era of human history, and has become the dominant ideology thereafter. Enlightenment marks the pinnacle of this idea. It happened in the backdrop of industrialisation during the 17th and 18th Centuries in the Western world.

We inherited the Western concept of modern anthropocentrism as a colonial legacy. The legitimisation of an economic process that applauds the suppression of the environment for the economic gains of the human takes place in this thinking.

Forests in the Central Highlands of the country were cleared for large scale plantations. A network of roads and railways was developed to link these areas with Colombo (as London, England, the colonial metropolis was connected to Colombo) to transport the production of the plantations to the metropolis.

The colonial economy destroyed about 30% of the forest cover in the country. This process was carried out with the mindset of conquering nature and establishing human supremacy over it. For the first time in history, elephants were seen as pests within this discourse. Accordingly, licenses were issued to hunt elephants that were a threat to the plantations. As a result, the elephants in the highlands were close to extinction by the time of Independence.

Post-Independence Sri Lanka also followed the same path of its coloniser towards development. Clearing forests and creating smallholdings was the main characteristic of the peasant colonisation schemes, which were implemented from the 1930s. This process was accelerated by the post-Independent Sri Lankan State.

In traditional settlements, farm lands and residential areas were separate. Houses were not scattered. The new scattered settlements paved the way for the human-elephant conflict (HEC) in the dry zone.

Roads were developed connecting the new settlements to main towns via forests. People built their houses along these roads, considering the economic gain from the commuters of these roads. This linear settlement pattern further intensified the HEC. Thus the battle between humans and nature became clearly visible.

The next phase of the battle started with the liberalisation of the economy. In the 1980s, 84,000 acres in Wellawaya were given to a British company to grow sugarcane. Elephants in the area were driven away. The visual of driving huge tractors imported from Britain to chase away the elephants that constantly returned to their homelands became a metaphor of the conflict between humans and animals.

Today, this type of large scale industrial agriculture (sugarcane, corn, banana, mango, etc) has expanded into millions of acres. Both of the rural and urban development approaches we have adopted are based on the anthropocentric notion of conquering the environment for the benefit of humans. The quotations given in the beginning of this article have become normalised and entered into everyday vocabulary as a result of this process.

At this juncture, it is necessary to ask what we have achieved from this development approach. If the human is supreme, at least humans must have benefitted from it. Unfortunately, this whole development approach has done nothing but create conditions that place the very existence of humankind under threat.

The earth is today becoming uninhabitable to humans due to global warming and desertification. Clean, breathable air has become a luxury in many main cities in the world. Humankind’s existence has become endangered due to natural and man-made disasters. The end of humankind is feared due to the irreversible changes done to the environment.

Most of the investments we welcome and embrace are mono-crop commercial agriculture projects of foreign multinational companies. Throughout history, there has never been a visible benefit to the local population from these investments. Instead, they have threatened the right to health, land ownership, and the livelihoods of the local population.

It has not only destroyed the forest cover and caused environmental destruction, but has also intensified the HEC. Only a few who are close to power have benefitted from these businesses. But we continue to perceive these types of activities as the path to development.

Due to the lack of vision in the development approach, the city of Colombo has become warmer. The methods used by countries in high altitudes to retain heat, such as laying interlock blocks and the use of glass and concrete heavily in construction, have been applied here in verbatim, under the misguided notion of urban beautification, thereby disregarding the methods that should be followed by a tropical country, such as keeping the soil uncovered, and maintaining tree cover over the roads.

Instead of beautifying, they have converted the landscape into a concrete forest. Decisions such as clearing forests inhabited by elephants and other species, for renewable solar electricity projects, clearly depicts how poor our thinking is.

What is taking place in Walsapugala?

The protest initiated by the farmers of Walsapugala in Suriyawewa, which has escalated into a fast unto death, is significant in this context. Discussions on and solutions suggested for the HEC are usually based on the thinking that humans and the environment are distinct from each other. Solutions such as constructing electric fences and chasing away the elephants belong to this realm of thinking. Politicians gain cheap publicity by taking the side of humans, in opposition to elephants, and provide temporary solutions.

But the farmers’ struggle in Walsapugala does not represent this traditional line of thought. They demand that the Government gazette an elephant management area for the elephants that are trapped in small forest areas due to deforestation and unplanned development in the Hambantota District.

If this elephant management area is declared, these elephants will get access to the Lunugamwehera, Bundala and Udawalawe Sanctuaries. During the last two decades, thousands of acres of forests have been cleared for projects such as the Hambantota Harbour, the Mattala Airport, the Southern Expressway and other connecting roads, and industrial agricultural projects.

The current HEC developed when the elephants lost their habitat due to the said activities (it is even arguable as to whether the local population or the national economy gained any economic benefits out of these projects). Today, in the world, Sri Lanka records the highest number of elephant deaths (405 in 2019) and second highest number of human deaths (121 in 2019) from the HEC.

The people in Walsapugala are not demanding an electric fence, or to chase away the elephants to another area. For them, elephants are also victims, to the same extent as the farmers. They are speaking on behalf of both themselves and the elephants, as the latter have no voice to do so on their own behalf.

For the people of Walsapugala, both the humans and elephants have something in common to achieve: an environment where both could live freely. Although Cabinet approval has been given to the said elephant management area, the Government continues to not declare it officially. Meanwhile, formal and informal actions are being taken to give away these lands to private investors for industrial agriculture and other projects. These actions are being justified in the name of development.

The farmers on the other hand represent a progressive stance of an eco-centric, futuristic approach. Thus, the struggle of the farmers in Walsapugala presents an important alternative for the current dominant discourse on the environment and the development model of Sri Lanka.

It is more significant because it is proposed by farmers at the forefront of the HEC. The farmers believe in co-existence with the environment, beyond the outdated anthropocentric development model. It is the duty of those who care for the wellbeing of all human and non-human animals, to support these farmers. In a country where the majority follows a religion which teaches to care for all living beings (siyalu sathvayo suvapath vethwa); we do not need to think twice to support this struggle.

October 26, 2021 byRuwani Fonseka No Comments
While reiterating that the people have a right to know who is behind the Easter attacks, Samagi Jana Balawegaya MP Eran Wickramaratne responded to allegations levelled against him which claimed that h