The locally made green traffic and fitness solution 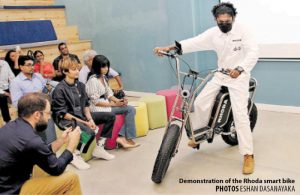 The vehicle industry has always been dominated by fossil fuels, but in the past few years, we have seen a significant push towards companies coming up with electric automobiles. However, it is not solely the companies that opt for electric automobiles; more consumers make the switch each year due to lower fuel costs, environmental stewardship, and energy independence.

This move for greener transport has also been making its way into the global bicycle segment, with the standard pedal bike and even motorbikes rapidly being replaced by electric/smart bikes. The global e-bike market is projected to grow at a Compound Annual Growth Rate (CAGR) of 9.01% to reach $ 38.6 billion by 2025 from $ 21.1 billion in 2018, according to international research.

This trend has now made its way to Sri Lanka in the form of Rhoda, the country’s first locally built electric bicycle. Themed “Cycling Redefined”, Rhoda was officially unveiled to the media on 24 September.

Speaking to The Sunday Morning Business, Rhoda CEO and Co-Founder Eyas Fazul said that Rhoda’s goal is to revolutionise mobility in Sri Lanka, focusing on the three key principles of convenience, sustainability, and value for money. He explained that they will first start by redefining cycling for the average commuter with Rhoda AT, Sri Lanka’s first electric smart bicycle.

The product also claims the title of Sri Lanka’s first smart bicycle. Its integration with a smartphone enables biometric authentication through the phone’s fingerprint sensor. It also enables face recognition to access the bike thanks to the smartphone HUD (heads-up display). Through a dedicated app, it allows the integrated lights and locking mechanism that can be controlled through the app for unprecedented safety and security.

Fazul stated that the ideation and conceptualisation of the product started in 2017, with the beta prototype having been completed in June 2020 thanks to his other two Co-founders, Head of Design Lee Bazalgette and Head of Production Fazul Mowjood. He explained that he had always been passionate about riding, especially old café racer-type motorcycles; however, his shift to electric mobility came three years ago when he saw an electric kick scooter that had a range of around 60 km in one charge while attending a solar conference in Singapore.

“It immediately dawned on me that this, a contextually designed electric mobility product, is the solution for the commuting problems in Sri Lanka, especially considering how bad rush hour commutes can be in our cities islandwide.” 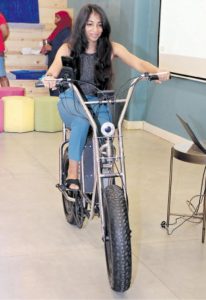 Fazul presented Rhoda as the solution to the average person’s travel woes, on account of the average speed during rush hour on a Rhoda being 19 km/h, in contrast to 10 km/h, which the average commute in a car, three-wheeler, or bus, reducing a 20 km commute time from 120 minutes to 70 minutes. He went on to state that a fully charged Rhoda has plenty of power for an average daily commute to work (30 km), run errands (10 km), and even meet friends (20 km) on Power Assist mode. Moreover, he stated that choosing to travel in a Rhoda AT would result in less one-person cars coming into the city. This would have a net positive effect on society with less congested roads, which would help other public transport commuters and city officials streamline traffic better.

“Riding a Rhoda also has a significant impact on the environment with the reduction of our daily individual carbon footprint created due to commutes, reducing the CO2 emissions of 7 kg in cars or 2.3 kg in three-wheelers to only 1.1 kg in a Rhoda, which can be further reduced if charged through solar, which is sustainable for the planet.”

He stated that by having the option to pedal in a Rhoda, there is a significant physical and also mental health benefit associated with it. When riding to work on Power Assist mode, the bike is set to act as a sort of exercise, with analysis showing a 30% reduction in calories burnt, compared to cycling on a conventional bicycle amounting to 495 calories.

“Finding time for exercise means we would need additional hours in a 24-hour day, in the midst of trying to balance work and life. However, the constant movement, breaking away from a sedentary lifestyle that Rhoda provides, acts as its own form of exercise,” Fazul added.

Speaking on the mental aspect of Rhoda, Fazul stated that there is countless research that links slow, passive commuting, such as being stuck behind a wheel or in public transport, to stress-related physical and mental illnesses like heart disease, anxiety, and even depression. It has also been shown that opting for an active commute, like walking or cycling, leads to a reduction in being prone to such illnesses and a boost in productivity due to increased blood circulation to the brain and the positive hormonal effects that occur when exercising; a more sustainable lifestyle for us.

“In summary, Rhoda is the more convenient, sustainable and economical, option for mobility and transportation.”

According to Fazul, the Rhoda AT was designed around the ideals of the daily commuter, starting with the step-through design similar to a scooter that allows someone to get on and off a Rhoda easily, in a well-ironed shirt and trouser, saree, or even more traditional outfits like a sarong.

Furthermore, other attractive features include the integrated locking mechanism that allows one to park a Rhoda anywhere, locking it to light poles and metal railing, and the integrated headlights and taillights for cycling at night after those long days at office.

He stated that these factors, alongside the bike’s ability to traverse a diverse range of terrains, including sandy beaches and inner gravel roads, make the switch to Rhoda attractive to a vast target market.

The company currently has two models, the AT which stands for All-Terrain and the AT SS which is the Stainless Steel variant of the AT, both having the same specifications. The two models are also customisable with a multitude of colours and accessory options.

For their first 50 pre-orders, they are giving each buyer a special edition of the Rhoda, called the Founder Edition, where they offer a free custom mural of the consumer’s liking. These orders are set to start delivering in the first quarter of 2021.

Fazul stated that most of their manufacturing is currently in-house, but they do source some items from local and international suppliers who manufacture based on their design specifications. He explained that iron and steel are some of the key materials in Rhoda, and due to this, they have partnered with suppliers who source them from a couple of countries such as India and China.

“Rhoda AT is for any populated city and is not limited to just Colombo. Congested cities like Kandy, Kurunegala, and Ratnapura; cycling cities such as Jaffna and Trincomalee; and even coastal cities like Galle and Matara are perfect for our product. Rhoda is designed and made in Sri Lanka, for Sri Lankans first.”

He stated that the current Government is looking to promote a cycling culture for daily commuting purposes. Therefore, Rhoda’s target is to have at least 1,000 Rhodies (Rhoda riders) on the streets of Sri Lanka in the first year of their production.

What Sri Lanka, IMF, and World Bank can learn from each other

May 31, 2022 byNews Admin No Comments
Anthony Nihal Fonseka was reappointed as a member of the Monetary Board of the Central Bank of Sri Lanka (CBSL) with effect from 26 May 2022.