The narrative needs to change through empowerment

September 5, 2021 by Naveed Rozais No Comments

The South Asian relationship with sexuality is, for many reasons, complicated. From colonial hangovers to a collectivist social structure that demands conforming to familial expectations and religious sensibilities, a lot of influences come into play with how we as South Asians react to sexualities and gender identities outside the “norm”, the most visible of which can be considered transgender. 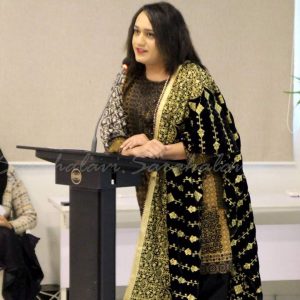 The term transgender denotes someone who was assigned a particular gender at birth (for example, a boy) based on their physically visible sex (male). This child, thus assigned, must then act in ways thought appropriate to that gender; like how boys should act only in ways that will enable them to grow into heterosexual, masculine men. People who feel no conflict between their assigned sex and their gender are said to be cisgender. Others, who do feel a conflict, might transition from one gender to another, for example, from woman to man, and can then frame themselves as transgender.

Aisha is the Director – Programmes at Wajood Society, a Pakistani transgender rights organisation, and up until February 2021, worked at the Ministry of Human Rights, Pakistan as a transgender rights expert and United Nations Development Programme (UNDP) Expert Consultant. She has been working for transgender rights and community development in Pakistan since 2015. She has published several research articles on transgender people in peer-reviewed journals, and played a key role as part of a national task force that pushed for the approval of Pakistan’s Transgender Persons (Protection of Rights) Act in 2018. She also teaches in different universities covering the subjects of gender, policy, and astrology.

In 2020, Aisha also represented Pakistan in a national delegation at the UN Convention on Elimination of Discrimination Against Women (CEDAW) committee in Geneva, Switzerland, becoming the first transgender person to represent any country for a reporting procedure of an official UN treaty review. The CEDAW committee works for women’s rights and equal access to health, education, political participation, and employment.

As part of her Pride message, Aisha spoke about her experiences working for the advancement of transgender rights in Pakistan and how Pakistan’s Transgender Persons Act was passed, emphasising the importance of lobbying, advocacy, and developing strong liaisons with lawmakers and religious leaders.

Brunch sat down with Aisha for a little more insight on trans issues in South Asia, her personal journey as a transgender person, and how we as South Asians can become more inclusive for the transgender community.

Aisha’s own journey as a transgender person 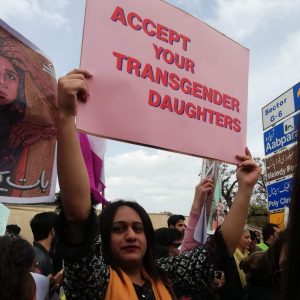 A question often asked of transgender people, and, well, anyone who is LGBTQIA+, is how they realised that they were different. For Aisha, this was never really a question, and even when she was in school, she used to be bullied for being feminine. “I always considered myself a woman – even when I was a child and growing up,” she said. “When I hit puberty and started showing masculine features like facial hair, I realised that I’m not a woman and that while society, my parents, my friends, all considered me a boy, I never felt like a boy.”

In her teenage years, Aisha began studying gender, and with exposure to the subject, came to realise that she was transgender.

Coming out was a difficult experience for Aisha, as it is for any transgender person. “When any transgender person comes out, the first criticism they face is from their parents, siblings, and friends. I also faced these experiences when I came out.” Over the years though, Aisha has found a lot of family acceptance, although she shared that this is not complete, and to date, she doesn’t attend family events like weddings and funerals because many of her relatives do not speak to her.

A snapshot of transgender rights and life in Pakistan

In 2018, Pakistan passed the Transgender Persons (Protection of Rights) Bill 2017, a historic move that allowed transgender people to be recognised as they perceive themselves and register with the government institutions as transgender, giving them basic rights such as the ability to obtain driver’s licences and passports that show their chosen gender instead of the one assigned to them at birth without any medical requirements or screening. The Bill also criminalised harassment of trans people at home, workplaces, and public spaces. 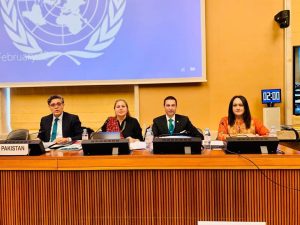 For context, in Sri Lanka, as per Circular No. 01-34/2016 issued in December 2016 by the Ministry of Health, Nutrition, and Indigenous Medical Services, gender recognition certificates may only be issued by the Ministry, on completion of a legal and medical process by transgender persons that involves, among other requirements, psychiatric evaluation. There is also very little, if any, formal legal protection for transgender persons when it comes to discrimination, public or private.

Aisha, who was part of the national task force driving the Transgender Persons Bill in Pakistan, explained that it was a very inclusive process that included both parliamentarians as well as transgender leaders from across Pakistan, setting the example for inclusive approaches going forward when formulating guidelines and laws that have anything to with the transgender community.

Aisha did share that, like in all South Asian countries, the transgender community in Pakistan deals with a lot of stigma and prejudice that stems from both religious values as well as social values.

“In general, most transgender people (in Pakistan) are not educated and can’t speak English, and because of this, they are vulnerable,” Aisha explained. “They don’t get as many economic empowerment opportunities as educated transgender people in developed parts of the world do.”

This is, however, changing for the better. “We are seeing a new generation of transgender people in Pakistan becoming more visible and becoming part of mainstream institutions, and the Government is taking initiatives to be more inclusive as well,” Aisha said, adding that Pakistan has recently opened a state-funded school in Multan exclusively for transgender students.

The transgender community and South Asia

Across South and Southeast Asia today, there is a severe constriction of gender and sexual plurality. For the majority of South Asian countries, most of which were under British colonial rule, homosexuality, along with any other sexual plurality, was criminalised, and very few of these countries, decades after independence, have reviewed these discriminatory (and fairly arbitrary) laws.

Commenting on the biggest issues that transgender persons face, Aisha said that familial and religious acceptance is a key issue for transgender people regardless of where in South Asia they are. “We South Asian people live in a collectivist society where the opinions and views of our relatives and neighbours matter a lot to us,” Aisha explained, adding: “And in a collectivist society, it is always very difficult for transgender people to open up and come out. They conceal their identities. This is one of the biggest issues that we need to address. I have travelled around and met transgender people of every culture, and getting acceptance from their families is a challenge for all of them.”

While noting that transgender communities in western society also face great struggles with acceptance and equality, 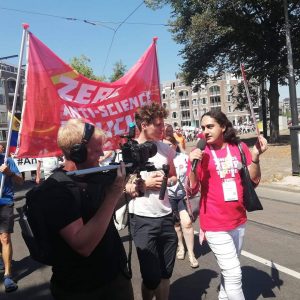 Aisha explained that because of South Asia’s collectivist social structure, as opposed to western social structures that are mostly independent and individualistic, with adults living independently from a young age and less prominence given to family and social expectations, South Asian transgender people often find themselves having to sacrifice a lot more when it comes to familial and social acceptance than their western counterparts.

Another important aspect of transgender issues is the right to marriage, a topic that is very difficult to discuss in South Asian culture because of the taboo that surrounds sexuality and sex, especially when religion is taken into account.

Even within Pakistan’s Transgender Persons Bill, Aisha shared that they chose not to talk about sexual rights and marriage, focusing only on social and economic rights. This was because of the complex dynamic of transgender issues in Pakistan, given religious intolerance and the readiness of the Pakistani community, both transgender and otherwise, and also surrounding the need to have the discussion on marriage and sexual rights for transgender and LGBTQIA+ persons. Aisha did share she hopes that this would change in the coming years.

While sharing that she couldn’t comment on Sri Lankan transgender issues specifically, because she is not physically part of Sri Lanka’s transgender community nor familiar with its specific issues, Aisha did share that a key step to transgender acceptance and inclusivity across South Asia is more mainstream programmes by South Asian governments to empower their respective transgender communities – from awareness programmes and community development to allocating budgets and job quotas to drive economic empowerment, because this is the best way to empower the community and change the narratives on transgender people.

“When people see transgender people in every kind of organisation in every kind of capacity, the perception will change,” Aisha shared. “Earlier, transgender people were seen only in compromising positions, and with the more empowering positions we see them in, the more the negative stereotypes will change and end. For example, now in Pakistan, you can see that transgender people can be teachers, policemen, TV anchors, and so on. You can see them being part of mainstream society and contributing to the economy in a productive manner. That is empowerment and that is how we’re going to change the narrative.”

For the love of life or tourism, protect Sri Lanka’s wildlife

June 26, 2020 byJennifer Anandanayagam No Comments
The human-wildlife conflict in Sri Lanka has been stuck at an uncomfortable crescendo for quite some time now, without any real solution being drawn up.