THE OVAL BALL – Week’s Rugby Roundup by Ranjika Perera: Its 2022! What is in store for Sri Lankan Rugby? 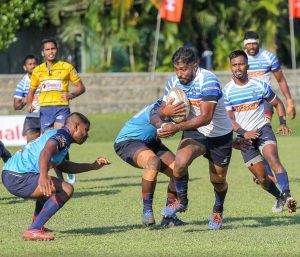 The good news is that club rugby will most probably return by the end of this month. Here is action from the Warriors Cup Sevens held last year, organised by Police and the Forces, and was won by Air Force. Photo SLR

With the changes of the dates of the national exams, the authorities are working on setting the time table to recommence the schools rugby season

I know we just finished a thrilling series of Schools Rugby Sevens just last week. But last week was last year? Now it is the New Year and we all need something new to look forward to.

Today is the second Sunday of the year 2022. The closest international rugby action we have is the Six Nations which is scheduled to kick off in February.

How about the local rugby scene? What can we expect this year? Will the Omicron ruin another year for sport? Well, we did some digging and we have some positive news for you.

Club rugby “might” return by the end of January

The 2019/20 season came to a premature end with the Super Round called off and Kandy SC rightfully crowned as champions yet again. In August last year, Air Force and CH&FC played a two-legged series for the Commanders Cup which was won by CH. Apart from those two games, XVs rugby was not to be found in the island.

However, Police together with the Forces, managed to organise the Warriors Cup Sevens which was won by Air Force. A young and inexperienced Tuskers side toured for the Asia Sevens and got thrashed twice by UAE. Ben Gollings’ second stint with the Tuskers ended with him getting the job as Head Coach of the two-time Olympic gold medallist, Fiji. All these happened but there was no sign of XVs rugby.

But, this New Year comes with a renewed hope. The good news is that club rugby will “most probably” return by the end of this month. However, it is unclear whether Dialog will be the principle sponsor. But the news is, everything is set and ready for the commencement of the Club Rugby League and we will have confirmation very soon.

Schools rugby schedule to be out next week

After thrilling two weeks of Schools Rugby Sevens last month, school rugby is yet to finalise the schedule for this year. With the changes regarding the GCE Ordinary and Advance Level Examinations, the authorities are working on setting the time table without hampering the education of the school players.

However, here is the bad news. The Omicron variant of Covid-19 is here and it is spreading fast, so unless the community take care of themselves, all these dates, fixtures, and plans will mean nothing.

I know, I know we have been hampered enough with this virus and we all want to get back to our normal lifestyle. Times are different I guess. We gotta adapt and hope for the best!

September 15, 2021 byRevatha No Comments
Hot news from the Europe

Football News From the World