The Peter Principle in a bureaucracy

Last week in this column I shared thoughts on “defending mediocrity or catalysing proactivity.”

The recent events while prompting today’s caption, “the Peter Principle in a bureaucracy” also made me reminisce about my years as a bachelor, when I worked with Deloitte in The Bahamas. Sundays in Nassau were certainly enjoyable. A mid-morning walk along famous Bay Street was almost routine. Beyond one side of the road was another parallel street that bordered the Nassau Harbour, with several cruise ships docked all the time. On the other side were perfume and clothing stores, bars and restaurants, bookstores, and of course great merengue music that yet rings in my ear, which wafted through the air.

I often spent hours in a particular bookstore, and by noon, would join our crowd of men and women, locals and expatriates, and then move on to a beach barbeque or beers and lunch by the harbour. It was on one of those days that the paperback “The Peter Principle: Why Things Always Go Wrong” by Laurence J. Peter captured my mind. The book was so interesting that I had read several chapters while standing, when I realised I was running late. Buying the book, I dashed out to join my friends. That night, I read the book from cover to cover, laughing out loud (or as the internet slang now goes: LOL) most of the time.

Laurence J. Peter, a Canadian psychologist, presented a paradoxical principle subsequently named after him, which states that: “Every new member in a hierarchical organisation climbs the hierarchy until he/she reaches his/her level of maximum incompetence.” A humorous way it is presented is that “the cream rises until it sours”.

Promotions based on prior performance

Essentially, the point he makes is that employees are promoted based on their performance in the functions currently assigned to them, and pursuant to the promotion, they reach a level at which they are no longer competent. The reason is that the knowledge, skill, or competence in the immediately previous job does not necessarily translate to the one he/she is promoted to.

The next promotion – and Peter’s Plateau

If however the person is competent in the new role, he or she will be promoted again, and will continue to be promoted until he/she reaches a level at which he or she is incompetent. Once this level of incompetence is reached, the employee will not qualify for further promotions and will stagnate at that final level. This level is termed the “Final Placement” or “Peter’s Plateau”.

The organisation – transition to mediocrity

Peter says, in an organisation, given time and many promotions, most employees may rise to their level of incompetence. Thus in time, many positions in an organisation will be occupied by employees who are incompetent to carry out their duties, leading to low productivity, poor performance, and ineffectiveness. Organisational mediocrity then sets in.

A competent schoolteacher is promoted to Vice Principal and is successful in meeting and talking with parents and members of the teaching faculty. Let us say she is then promoted to the position of Principal. However, while the teacher may have been good at teaching and educating children, and meeting with fellow teachers, preparing curriculum and study packs, as the Principal, however, she may be poor at overall administration. Thus, the cream has risen and will now begin to sour since she has reached her level of incompetence.

Peter’s classic applied to economists, accountants, and others

Over the years, I have endeavoured to apply Peter’s classic example to many situations in organisations I have worked with, or advised or analysed in order to understand why a person is unproductive, ineffective, insecure, or simply unable to perform.

Here are some examples: An economist who is an academic most of her life may be a poor economic strategist in a corporate; a strong auditor in charge in the field may be a poor manager of people; a strong manager may be a poor partner; a strong partner may be a very poor managing partner or thought leader, or even poor at practice development viz. the professional services equivalent of marketing and business development; a lawyer very good at litigation may be ineffective as a partner of a law firm or an administrator; an eminent surgeon may be a poor registrar or managing director of a hospital. These are only a few examples.

I thought I must share at least a part of the following literary satire, so that we can identify and empathise with many situations in the public sector in particular and try to build safeguards to prevent and pre-empt certain situations in the interest of the institutions. Of course, all of these can well apply to the private sector.

I term this deliberate promotion of incompetents. Some call it a “kick upstairs”. It is actually a move from one unproductive position to another. The morale of certain staff members is given a boost by this, and these employees believe that they also will soon be promoted even without performing!

This is when a person is moved laterally, out of the way and given a new job title.

I am sure we have seen this happening in the public sector a lot.

While incompetence is a barrier to promotion and super-incompetence a case for dismissal, the politics of a hierarchy, whether in the private or public sector, may perpetuate both types of people and positions.

Interestingly enough, super-competence can well result in a superior transferring such a person out to a job function that stifles creativity and performance so that the superior can look good while yet underperforming. 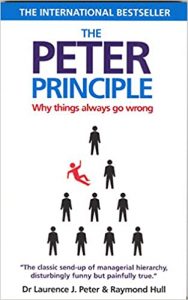 Push refers to a committed and productive employee achieving a promotion through his own efforts and self-improvement. However, the next level is occupied, blocking his path to promotion. Pull refers to accelerated promotions brought about by an employee’s mentors, patrons, or sponsors!

‘Growing with Giants’ and the Belt and Road Initiative

I have conveyed the principles behind Laurence J. Peters’ thesis, in “lighter vein” above. It can be a guide to the public sector in progressing to a higher stage of productivity and organisational effectiveness, via better talent sourcing and selection, the right promotions, and the most appropriate resourcing of administrative and technical cells. Let me now share a statement I released to the media, three years ago, at a “Growing with Giants” forum at the Cinnamon Grand, Colombo.

This is what I said in June 2017. “There is a need for the incumbent Government to review, restructure, re-skill, capacity-build, and reposition public sector institutions if we are to truly realise or leverage even part of the potential of the much-spoken-of abundant opportunity vis-à-vis, the ‘One Belt, One Road’ initiatives, or trade and investment with China, India, or any other.

I posed the question: “How much do we allocate to train, develop, and deploy people of public sector institutions? Not only the heads of institutions, and departments alone but a large cross section of people, should be re-skilled say by rotation. How much of unlearning and relearning are they exposed to? How much succession planning do we have in the public sector?”

“We need a coalition of stakeholders, between ministers, ministries, public officials, and private investors. There has to be a wholesome alignment of interest. Whether it is to attract foreign direct investment through the Board of Investment or foreign portfolio investment through our capital market and the Colombo Stock Exchange, or to negotiate trade agreements with the Department of Commerce, Ministry of International Trade and Development Strategies, or a public-private partnership through the new PPP unit of the Ministry of Finance, we must build capacity and capability within our institutions, on a priority basis.”

Though the names of Ministries and subjects have now changed, I like to think that this thought yet has value.

As a strategy to enhance co-ordination and facilitation across ministries and government departments, I suggested as follows: “We need an adequate number of up-to-date and aware, qualified, skilled, competent people, who work with a sense of urgency and a level of seriousness if we are to leverage the opportunities that we speak of at various times. We need ‘facilitation cells’ (technical and administrative, and perhaps multidisciplinary) in public institutions, with people who are optimally equipped to make things happen.”

September 13, 2020 bythemorningeditor1 liberty No Comments
Last year, the world threw away around 300 million tonnes of plastic, which is near-equivalent to the weight of the global human population.

March 2, 2021 byNews Admin No Comments
The Ministry of Finance has revoked the Inland Revenue Department’s (IRD) authority to collect the Goods and Services Tax (GST) that was announced in the 2021 Budget, and plans to collect these monies