The power of your own story with Asha de Vos 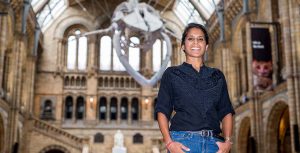 On Thursday (19), biologist Arun Dayanandan (@wildarun), along with Oceanswell (@oceanswellorg) Founder and National Geographic Explorer Asha de Vos (@ashadevos), came together for a live discussion on Instagram to chat about the “power of science communication from your own backyard”.

The Live titled “The Power of Your Own Story”, which kicked off at 9:30 p.m. (local time), had two scientists touch on a number of topics, including the influence of local stories to change our planet, with focus on Asha de Vos and her story on coming up as a conservationist and carving her own path to where she is now.

It was a riveting conversation between the duo and one of the topics which really engaged the viewers was the topic of “parachute science” also known as “colonial science”, which is the conservation model where researchers from the developed world come to countries like Sri Lanka, do research, and leave without any investment in human capacity or infrastructure. According to de Vos, it creates dependency on external expertise and cripples local conservation efforts. She added: “The work is driven by the outsiders’ assumptions, motives, and personal needs, leading to an unfavourable power imbalance between those from the outside and those on the ground.”

She said that 70% of our coastlines are in the developing world, but representation at the global stage is disproportional. She said that if we aren’t being inclusive and equitable, we aren’t going to move the needle on the things that really matter, and as humans continue to destroy habitats, we can look forward to more frequent unintended consequences like pandemics and perhaps even global lockdowns. She noted that building the mechanisms that would enable us to continue the important work of conservation no matter what, should be our priority.

De Vos shared that conservation projects in the developing world should invest in local scientific talent and infrastructure, rather than coming in and collecting their data and moving on, which does nothing for the local ecosystem. She also noted that there is a need for locals to come and take up roles in conservation and science, while adding that there are many who are interested; she said she is ready to help them.

She shared her story about how she got her first breakthrough, where she worked as a deckhand because she was willing to do whatever it took to be a part of a research vessel where she planned to then prove to those onboard that she can be of value as a researcher. She added that all it really takes is a burning passion to pursue what you want to achieve.

While she is ready to give advice and show young people her own path, de Vos noted that it is but one path, and that is drastically different to someone else’s. She said that you must carve your own way. However, she will help you along the way, give you whatever advice you need, and share her story – but the rest is up to you.

De Vos also shared that this science of conservation is not something that happens overnight and it is certainly not going to work in the funding cycles of two to three years of funding and total drought, and therefore, there is great importance in working in policy change, which will allow conservation to be sustainable and truly effective. She added that this is what she is currently working on, which will also lead to many minds being focused on making it happen, in turn leading it back to how important it is for you and how passionate you are about making it happen.