September 25, 2019 by themorninglk No Comments 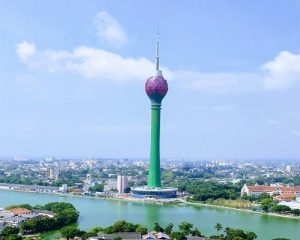 As the Lotus Tower rises up in its iridescent glory amid a deluge of divergent opinions and allegations of corruption, it’s a good time to talk about passion projects. The skyline-defining tower does have multiple commercial purposes, the chief of which will be to host communication antennae for television, radio, and telecom service providers. Costing over $ 100 million, it’d take some time for the tower to recoup similar earning from the planned tourism propositions and antenna rentals.

The problem with pursuing passion projects such as these is the misallocation of spending and effort that could be put to far better use elsewhere, especially in an economy such as ours where prestige should take a back seat to meet basic needs. While they are visionary and inspirational, iconic infrastructure tends to belong to the white elephant variety whose charms may only unfold with the vicissitudes of time; examples abound from Olympic domes across host cities to many of the massive edifices in Dubai and China, and even the Empire State Building.

There are parallels in the private sector in instances where projects such as these are undertaken with the returns weighing heavily in favour of return on ego instead of return on investment. You don’t need much inside knowledge to realise that much of Sri Lanka’s business world is led by personalities whose backgrounds, motivations, positions, and beliefs become a large part of their company’s culture. Even some of the largest “publicly listed” corporates are driven by the singular vision of one individual or a founding family. In this milieu, plenty of passion projects are conceptualised and pursued, often with impetuous zeal.

These large initiatives driven by individuals are usually embarked on without much heed for financial returns, and depending on the personality of the leader, the true motivations could vary wildly from a genuine desire to do good to focusing purely on his/her own legacy and influence.

But what really distinguishes a passion project? The definitive passion projects are grounded in emotions and passion, obviously, and not in vanity. They may be visionary or unusual, or even downright crazy. And they are likely to be deeply personal and therefore not easily understood or appreciated by others who don’t understand the motivations of the promoter. While they may not be profitable, passion projects can be of value if they allow creativity and provide a sense of purpose, and attempts in some way to push for positive change.

The thing about passion projects though is that they need not be limited to just the leadership; companies can embrace such initiatives by encouraging employees to pursue side projects that have relevance and potential. In fact, these can be a great creative outlet for your employees, offering them the opportunity to stray from their linear duties and everyday monotony and jolt themselves into thinking differently and innovatively. Of course, there must be parameters set on the amount of time they spend on such work and the resources at their disposal, but the very fact that you permit such pursuits will pay you back in better retention and satisfaction levels and reignited spirits. Remember that Gmail was once the passion project of a single Google employee named Paul Buchheit.

Not everyone in Sri Lanka can pursue passion projects with the likes of Larry Page’s flying cars or Elon Musk’s space ambitions, but within resources and reason (and a fair bit of discipline), business leaders and their employees will work even better if they pursue something they love for at least a few hours a week. The challenge is to keep egos in check.

Each week, The Sunday Morning Business focuses its headlights on the private sector of Sri Lanka as the engine of growth and the torchbearers of our economic progress. Through our editorial, we seek to applaud and celebrate our corporate heroes and shed light on the multiple challenges that stand in their way.

Second quarter GDP data only in 2021?

October 25, 2020 byCharindra No Comments
Sri Lanka is facing the very real possibility of not being able to release second quarter GDP data for 2020 within the year, even though it is usually released every year before mid-September.

Rating downgrades: We aren’t alone but we aren’t good

December 20, 2020 byNethmi Liyanapathirana No Comments
Sri Lanka has become good at one thing in recent times. That is, disputing Sri Lanka’s sovereign downgrades by international rating agencies, back to back. In the long list of disputes, the recent..