The rise and fall of the proposed European Super League (ESL) 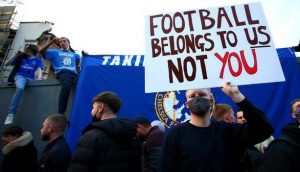 It was a huge day in world football, and this proved that the sport is bigger than money or greed

A whirlwind 72 hours in the world of football reminded the world that, “football is nothing without the fans”.

Here is how the $ 4 billion worth European Super League (ESL) was confirmed and how it all came crashing down within two days.

The 12 clubs included the “Big Six” from the Premier League: Manchester City, Manchester United, Arsenal, Chelsea, Tottenham Hotspur, Liverpool together with Atletico Madrid, Real Madrid, Barcelona, Juventus, Inter Milan, and AC Milan. The ESL website sad: “The Super League is a new European competition between 20 top clubs comprised of 15 founders and five annual qualifiers. There will be two groups of 10 clubs each, playing home and away fixtures within the group each year. Following the group stage, eight clubs will qualify for a knockout tournament, playing home and away until the single-match Super League championship, in a dramatic four-weekend to the season. Games will be played midweek, and all clubs will remain in their domestic leagues.”

FIFA was quick to respond on this matter. The statement said, “the governing bodies of football should employ all lawful, sporting, and diplomatic means to ensure this remains the case. Against this background, FIFA can only express its disapproval to a ‘closed European breakaway league’ outside of the international football structures and not respecting the aforementioned principles.”

The European governing body, UEFA issued a combined statement together with the English Football Association, the Premier League, the Royal Spanish Football Federation, LaLiga, the Italian Football Federation, and Lega Serie A with regards to this proposed Super League. It said, “We will consider all measures available to us, at all levels, both judicial and sporting in order to prevent this happening. Football is based on open competitions and sporting merit; it cannot be any other way.”

UK Prime Minister Boris Johnson was firmly against it sayin, “It is your game – and you can rest assured that I’m going to do everything I can to give this ludicrous plan a straight red”.

19th Monday Morning: The 12 clubs step down from the European Club Association (ECA)

PSG midfielder Ander Herrera was one of the first to speak out. He said, “I cannot remain silent about this. I believe in an improved Champions League, but not in the rich stealing what the people created.”

Leeds home ground at Elland Road was hosting their match against Liverpool. Fans from both sides joined together in protests outside the grounds. Liverpool shirt was burned, and a plane flew over the stadium displaying an anti-ESL slogan. Leeds players wore T-shirts saying ‘Earn it’ next to the Champions League logo and ‘Football is for the fans’ at the back.

Real Madrid President and ESL Chairman Perez claimed the clubs were “doing this to save football at this critical moment” and that “young people are no longer interested in football”.

Later that day, UK Prime Minister Boris Johnson held a meeting with the representatives from the Football Association, Premier League, and football fan groups. He vowed to give his “unwavering support” for their attempts to prevent the breakaway competition.

The remaining 14 Premier League clubs “unanimously and vigorously rejected” plans for the ESL, and the Premier League stated it was “considering all actions available to prevent it from progressing”.

Manchester City and Chelsea were the first to realise their mistake and pull out of the ESL. Before midnight, all six Premier League clubs announced that they will withdraw from the proposed ESL.

The ESL issued a statement and it said: “Despite the announced departure of the English clubs, (who were) forced to take such decisions due to the pressure put on them, we are convinced our proposal is fully aligned with European law and regulations as was demonstrated today by a court decision to protect the Super League from third-party actions.”

Few hours later, Liverpool owner John W. Henry was the first owner to come out and apologise to the public. He also apologised to Jurgen Klopp and the players and he promised to do all he could to win back the supporters’ trust.

21st Wednesday Afternoon: It’s all over

Juventus Chairman and ESL Founder, Andrea Agnelli admitted that they are unable to go ahead with the plans as all English teams pulled away from the League. He said, “I remain convinced of the beauty of that project, of the value that it would have developed to the pyramid of the creation of the best competition in the world, but evidently no. I don’t think that project is now still up and running.”

Few hours later, Atletico Madrid and Inter Milan pulled out of ESL, which meant only eight out of the 12 clubs remained interested in the ESL. It was a huge day in world football, and this proved that the sport is bigger than money or greed.