The tower of strength behind the warriors

BY the Directorate of Media of the Sri Lanka Army

The military wife is a highly respected social status that only a few ladies would be privileged to be adorned with. They will also be proud due to the altruism and patriotism of their spouses who dare to opt for the profession of arms in their lives. This honorary title and prestige is bestowed upon military wives, and conversely, their sense of devotion and philanthropy towards the military families have led to their recognition and appreciation in society. In particular, the Sri Lanka Army (SLA) Seva Vanitha Unit (SVU), the leading welfare arm of the Sri Lanka Army, comprised of military spouses, has made an indelible imprint in the hearts of each and every family which has connectivity to the SLA in numerous ways.

The SLASVU, founded on 12 July 1984, proudly marked its 37th anniversary on 12 July 2021. Today, the SLAVSU, which was established with the primary aim of assisting the families of the valiant war heroes who made the supreme sacrifice in the line of duty as well as those who were wounded in action, has become an indispensable element of the SLA with its unique and timely welfare measures being carried out to facilitate army personnel. On the directions of then Army Commander General Tissa Indraka Weeratunga, the SLASVU became functional on 12 July 1984 with a host of spouses of serving senior army officers joining. As per tradition, the incumbent Army Commander’s spouse is appointed the Honourable President of the SLASVU. Accordingly, Sonia Evangeline St. Clair Rhode Weeratunga was privileged to head the newly raised SLASVU as the First Honourable President.

Since its establishment, the SLASVU has progressively evolved in expanding its capacity to cater to the demanding requirements of the families of army personnel, for which all the former presidents of the SLASVU should be commended with gratitude. To date, the unit has been headed by 15 courageous ladies as honourable presidents with their intrepid leadership capabilities and farsighted visions to make the unit what it is today.

The provision of welfare facilities to the soldiers, the main objective of the SLASVU, encompasses the following dimensions:

During the conflict period, the SLASVU had been instrumental in enhancing the morale of the soldiers on the battlefield by ensuring that their families and the concerns on the home front were looked after with utmost care. In addition, the responsibility of taking care of the hospitalised war heroes who were wounded in action was mainly shouldered by the SLASVU through a number of benevolent projects in order to fulfil their needs as well as the needs of their family members. 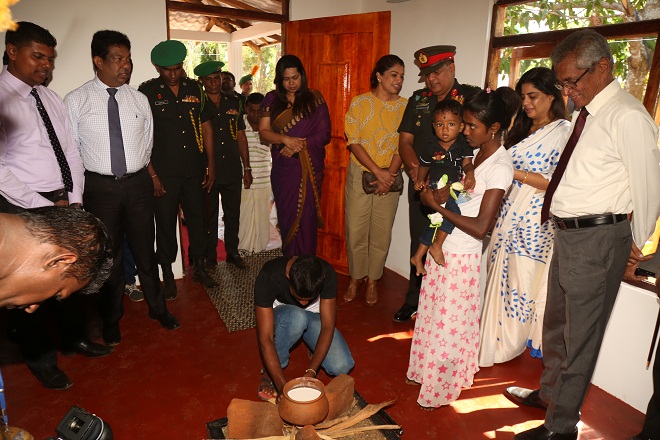 The ventures launched to make the family members of the warriors who were at the battlefront mentally robust and emotionally resilient are commendable, as those caring roles inspired those family members to live with pride and honour of their spouses, brothers, and fathers who have accepted to dedicate their today for a better tomorrow for the nation.

As a cohesive charity organisation, the SLASVU, which is composed of the Honourable President, the Vice President, the Executive Members and the administrative staff, has so far made an invaluable contribution in accomplishing its goals. Thereby, it has offered many opportunities to help and share gratitude with the warriors who sacrificed the best part of their lives for a better future for all of us by means of awarding financial grants, the distribution of donations, and the provision of numerous services. Its specialty is that all these welfare measures are carried out by utilising the funds raised through numerous projects and without asking for any financial patronage from the SLA.

Being futuristic to realise the possible demands which may emerge with time, plans are underway to launch a number of new projects in the fields of catering, food and beverage, recreation, and flora and fauna. The prominent new projects to be implemented include a canteen at the hospital of the Sir John Kotelawala Defence University, a flower boutique at the Army Headquarters, a floral project at Diyatalawa, a canteen at the Parliamentary Complex, a reception hall at Maitland Place, a holiday bungalow at Kataragama, and yoghurt manufacturing projects in Diyatalawa and Hanguranketha.

Under the guidance and leadership of incumbent SLASVU President Sujeewa Nelson, the SLASVU is rendering its services in a wider scope with comradeship to bestow its full potential in facilitating welfare needs at the optimum level. While the SLASVU is to empower soldiers with the necessary welfare measures, today, it has gone beyond its scope and expanded its wings in many fields, a proven testimony to the versatility and perseverance of the ladies. The SLA has been greatly benefitted from the commitments and contributions of the members of the SLASVU who play different roles as wives, sisters, and mothers, and most importantly, as the towers of strength behind the great warriors of the Army.

The contribution of these ladies has made a considerable impact on the progress of present society. These ladies, globally and locally, have risen to greatness and power by entering into different spheres, increasing their influence in society. These ladies in the present day have surpassed the traditional roles and embarked on journeys in multiple fields to provide active support and contributions to the family first, to the workplace next, and to the community at large in a broader sense. Thereby, the role of the military wife has given a newer facet to the traditional lady and empowered her with the strength to act in multiple roles with confidence. Today, the military wife, with the loving care of a soft lady with the warm affection of a mother, will be a courageous lady tomorrow, who could even win the world by proving that “the hand that rocks the cradle is the hand that rules the world”.

May this appreciative note be a tribute to all the ladies of the SLASVU who are wholeheartedly and relentlessly dedicated to the welfare and wellbeing of the warriors of the SLA.

August 30, 2020 bythemorningeditor1 liberty No Comments
Allegations have been levelled against former Minister of Education Akila Viraj Kariyawasam for misappropriation of funds of the CCF, one of the principle heritage management institutions

All liquor stores to be closed on Independence Day

February 2, 2021 byMihi Perera No Comments
The Excise Department states that all liquor outlets in the country should be closed in view of the National Independence Day which falls tomorrow (04).