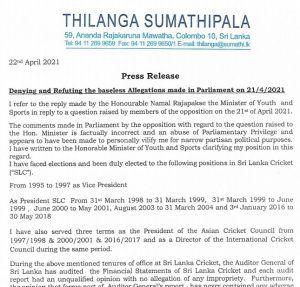 In a letter issued to the media yesterday (22), former Sri Lanka Cricket (SLC) President, MP, and Deputy Speaker Thilanga Sumathipala said he denied and refuted allegations made against him in Parliament on Wednesday (21).
In his letter Sumathipala said Youth and Sports Minister Namal Rajapaksa is “factually incorrect” because the alleged financial misappropriation incident had happened during the time that the then Sports Minister Faiszer Musthapha had appointed a Competent Authority to oversee overall responsibility of SLC.
Sumathipala alleged the said accusation “has been made to personally vilify me for narrow partisan political purposes.”
Responding to Opposition MP Chaminda Wijesiri, Rajapaksa told Parliament that reports by the Committee on Public Enterprises (COPE) had revealed earlier that a misappropriation of Rs. 29 million had taken place during the period Sumathipala served as SLC President.

August 23, 2018 byRevatha No Comments
Chathuranga Dissanayake adds to the Lankans' woes as he flops in men's weightlifting.

August 11, 2021 byRevatha No Comments
The primary target will be its addition to Los Angeles 2028