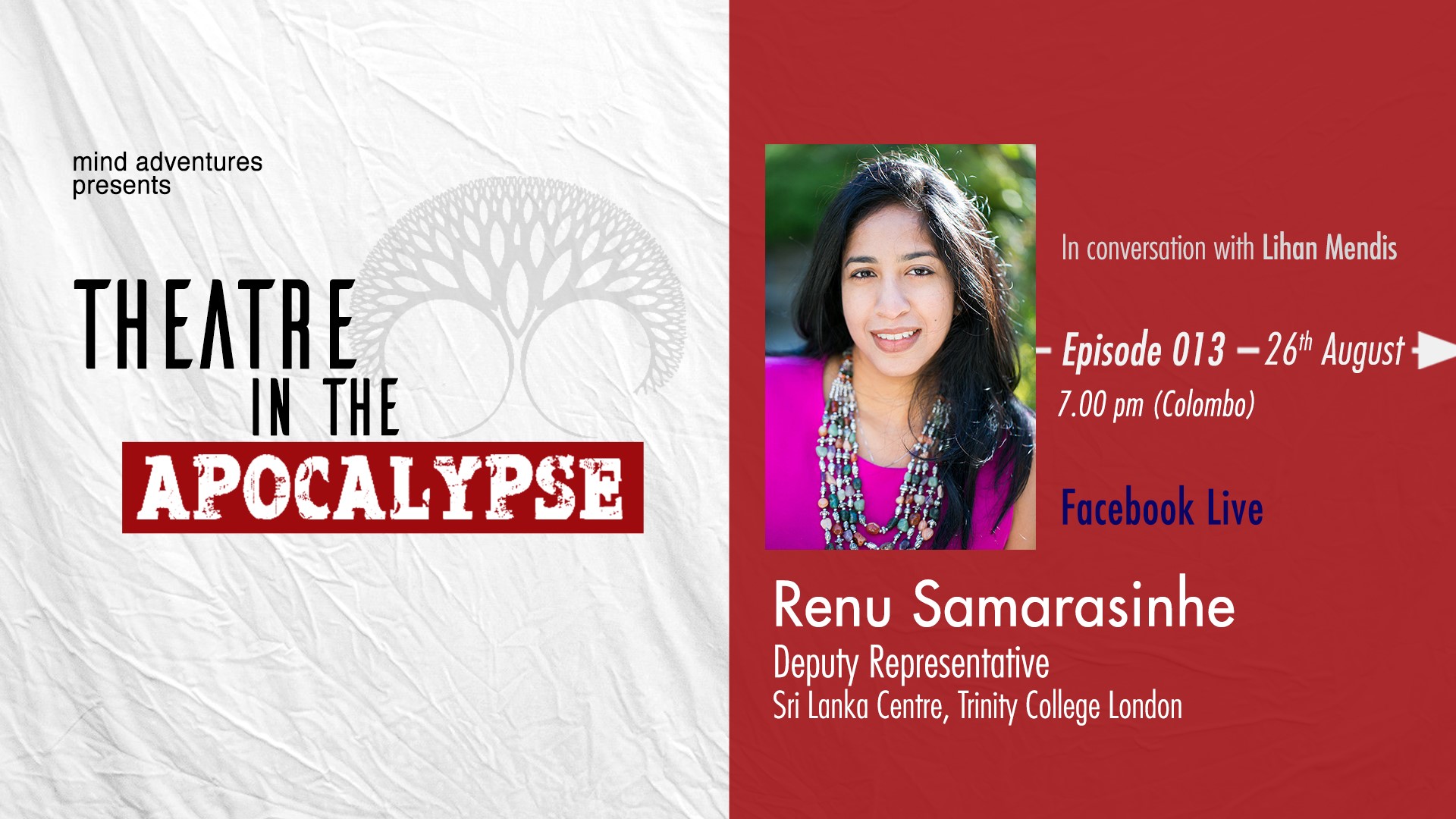 This week in Theatre In The Apocalypse: Renu Samarasinhe

August 28, 2020 by Dimithri Wijesinghe No Comments

Mind Adventures Theatre Co.’s Episode 013 of Theatre In The Apocalypse featured Renu Samarasinhe, Deputy Representative for the Sri Lanka Centre at Trinity College London, who joined in on a live Facebook webinar on Wednesday, 26 August at 7 p.m.

Samarasinhe is currently pursuing a career with Trinity as she discovered that her passion was in supporting and developing opportunities in the performing arts, and she’s able to do so for students in Sri Lanka via Trinity and it’s programmes.

She shared that as a facilitator of education, the primary thing they had to lay focus on was keeping in touch with their students.

With Trinity College London, the examination process has always been a face-to-face examination where examiners travel from the West to 60 countries around the world. But given the current circumstances, this is obviously not possible, and for Trinity it has represented a considerable shift.

While it is traditionally a face-to-face examination, they chose to forego this in light of the current situation and, as a result, were able to assess via recordings, allowing students the opportunity to record and submit their performances.

She also said that as an exam board, Trinity really stepped up here as it was not easy for them to do. “It was definitely challenging, but they managed to pull it together and this gave the students the opportunity to record themselves and take part.”

“They literally said our objective here is to get students to their next level,” she said, which is why they came up with these alternative ways of assessing their work.

Samarasinhe said that as most industries may have faced, not everyone was up for it and totally onboard. “Trinity depends heavily on teachers and teachers have to teach, and of course Trinity candidates would know this; you are constantly practising with your teachers a few weeks prior to the exam and if the teacher is not willing to compromise the quality of their teaching by doing it online or they are not used to it, they will not allow those students to participate, which is also understandable.”

There are two sides to it and Trinity understood this, she said, adding that they conducted a series of webinars to help teachers too to continue on via this new medium.

Going forward, Samarasinhe said that Trinity is going to move onwards with this digital space of exams that are set to go hand in hand with their face-to-face exams, adding that therefore this shift has represented a landmark moment for longstanding organisations such as Trinity.

www.historyofceylontea.com: A tribute to both the brew and the industry

June 7, 2020 byJennifer Anandanayagam No Comments
The Dilmah “History of Ceylon Tea” website is a matchless platform for a unique story, from mythical beginnings to the present day.