September 6, 2021 by Revatha No Comments

* Russia or ROC? Russia took part as ROC in both Tokyo Olympics and Paralympics as an outcome of a decision by the World Anti-Doping Agency (WADA) in 2019 to ban Russia from all international sport for four years, after it was found that data provided by the Russian Anti-Doping Agency had been manipulated by Russian authorities with a goal of protecting their athletes involved in an alleged state-sponsored doping scheme

* Like in the Olympics, the state of emergency happening in Tokyo and the event was held entirely behind closed doors with no physical audience permitted

* The first-ever Paralympics is considered to be the one held to coincide with the 17th Summer Olympics in Rome, Italy in 1960

* The 1960 Paralympics, as was known then as the 9th Annual International Stoke Mandeville Games, and was only retroactively designated as the 1960 Summer Paralympics

* It was the first international Paralympic Games, following on from the Stoke Mandeville Games held from 1948-52

* The International Paralympic Committee (IPC) was formed in 1989 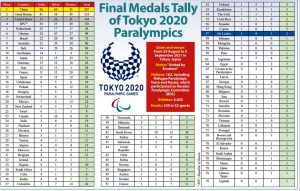 August 12, 2021 byRevatha No Comments
Yet the SLC T20 League set to begin in Kandy