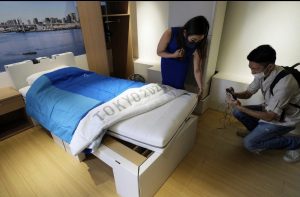 Images from athletes showed small rooms, with a single bed, of only nine square metres and doubles of 12 square metres

A number of athletes have taken to social media to share a laugh at the comical ‘anti-sex’ cardboard beds at the Olympic village in Tokyo.

Organisers announced that athletes will sleep on bed frames made from recyclable cardboard, with mattresses formed of polyethylene materials that will be reused for plastic products after the Games.

Up to 18,000 beds are required at the village, nestled in Tokyo Bay and in sight of the iconic Rainbow Bridge, during the Olympics that begin on 24 July, reported Yahoo Sports on Monday (19).

Only 8,000 beds will be needed for the Paralympics. But conditions are not necessarily luxurious. Images from athletes showed small rooms, with a single bed, of only nine square metres and doubles of 12 square metres. 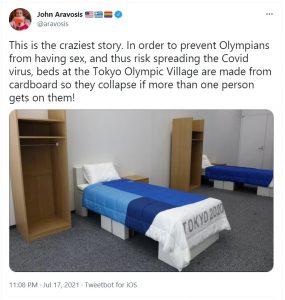 Athletes will have to share the room, which experts have claimed could increase the risk of spreading Covid-19. But many have also taken a dig at the laughable ‘anti-sex’ beds.

While the beds are tough enough to stand up to beefy weightlifters and towering basketball players, they are designed for one person only. Athletes and fans have started arriving in Tokyo as they settle in ahead of the Opening Ceremony this week and many have taken a cheeky dig at the sleeping arrangements.

May 21, 2021 byRevatha No Comments
The ODI series begins in Dhaka on Sunday