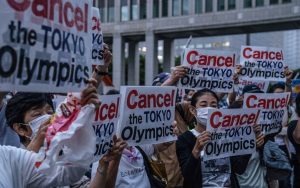 Nearly 450,000 people signed an online petition to cancel the Games

Organisers of the Tokyo Olympics on Tuesday (20) confirmed that a foreign athlete has tested positive for Covid-19 at the Games Athletes’ Village. The tally also included an Olympic volunteer for the first time since the committee started compiling figures on 1 July, bringing the total number of Games-related infections to 67, three days out from the opening ceremony.

Meanwhile, organisers revealed that of the 21 members of the South African men’s soccer team who were identified as close contacts, three were exempt from self-quarantine after further case investigation and contact tracing, reported Shweta Agnihotri of the Inside Sport based in India on Tuesday.

A female US gymnast

As per Kyodo News, eight more people related to Tokyo Olympics have also tested positive for the coronavirus.

Earlier, a female gymnast from the United States tested positive for Covid-19 at her pre-Tokyo Olympic training camp. The athlete was training in the city of Inzai, Chiba Prefecture ahead of the opening of the Tokyo Olympics, as per Kyodo News.

The name of the athlete has not been revealed as of now but it is being reported that the female gymnast is a teenager. Earlier on Monday, the Czech Republic’s beach volleyball player Ondrej Perusic came out Covid-19 positive. Ondrej is currently asymptomatic and is in isolation according to the rules, it was reported on Tuesday.

This was the second case in the Czech team after an official tested Covid positive after the contingent’s arrival at the airport.

On Sunday, eight members of Great Britain’s Olympic team entered isolation after coming into contact with a Covid-19 positive person on their flight to the Tokyo Games.

The six athletes and two members of support staff had tested negative before departing for Tokyo and upon arrival, but now they have identified as a close contact of an infected person who was with them on the flight, reported Sky News.

The three members to test positive for Covid-19 are Thabiso Monyane (player), Kamohelo Mahlatsi (player), and video analyst Mario Masha. These three returned positive results in the latest round of daily sputum (saliva) testing, added the Inside Sports.

England takes aim on SL’s Test bastion!: Gets control over the first Test with a 185-run lead

January 17, 2021 byRusiru Keppetipola No Comments
Sri Lanka’s historic Test cricket fortress in Galle was in danger by the end of the second day’s play on Friday (15), as England had laboured, on the back of a resilient Joe Root century (168 not out)

August 29, 2018 byRevatha No Comments
Rugby 7s at Asian Games will begin on Thursday. Can Sri Lanka make a mark?