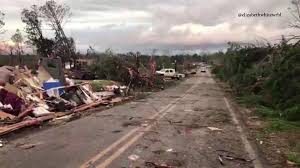 At least 23 people, some children, have been killed after tornadoes struck Lee County in eastern Alabama, authorities said.

Sheriff Jay Jones said the toll could rise, but rescue efforts had to stop until dawn due to the danger of searching in the dark.

“The challenge is the sheer volume of the debris where all the homes were located,” he said.

It is unknown how many are injured. Authorities have blocked off the area.

The National Weather Service (NWS) classified the first tornado to strike as at least an EF-3 – meaning winds of up to 165 miles per hour (266km/h) – carving a path at least half a mile (0.8km) wide. BBC

February 26, 2019 byRandev No Comments
North Korean leader Kim Jong-un has arrived in Vietnam for a summit with US President Donald Trump later this week.

January 23, 2020 byTSM Web Desk No Comments
Wuhan, a Chinese city of eleven million people, is to temporarily shut public transport as it tries to halt the outbreak of a new strain of virus.