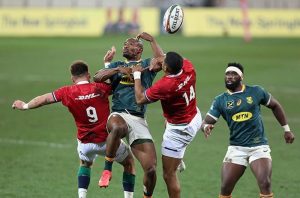 Warren Gatland’s British and Irish Lions came from behind to steal the win in the opening Test of the series last week. The second rugby Test between them and the Springboks will kick off today (31) at Johannesburg at 9.30 p.m. Sri Lanka time

The second rugby Test between Springboks versus British and Irish Lions will kick off today, Saturday (31) at Johannesburg at 9.30 p.m. Sri Lanka time.

Warren Gatland’s men came from behind to steal the win in the opening game of the series last week. Springboks’ bench failed to contribute in the second half which helped Lions get a late winner to seal the win.

Ox Nché was ruled out due to the neck niggle he picked up in the first Test. Trevor Nyakane and Kwagga Smith go to the bench while Vincent Koch and Marco van Staden make it to the bench for the first time in the series.

Springboks Coach Jacques Nienaber stated, “This is a massive game for us. It is do or die in order to stay in the race to win the series and we selected a team that offers continuity in selection, but also that we thought would be the best suited to achieve the objectives we have set for this match.

“We need to be better in every area of the game this week, and the set pieces will be crucial in laying the foundations we need to execute our game-plan effectively. We also spoke about our discipline and the aerial battle as a team, and we intend to work as hard as possible at training this week to correct the errors that cost us last week.”

Three changes among Lions too

The victorious Lions have also made three changes to their starting line-up. Scrum-half Conor Murray, centre Chris Harris, and prop Mako Vunipola make it to the starting XV while Wales’ No. 8 Taulupe Faletau join the bench.

Dan Biggar is named at fly-half but he is subjec to completing the concussion return-to-play protocol and assessment by an independent concussion consultant.

Alun Wyn Jones will captain the side to in his 11th successive Lions Test cap and he will be determined to motivate his team to seal the win and series on Saturday.

August 24, 2021 byRevatha No Comments
PCB has accepted the ACB request to postpone series