Towards better utilisation of GSP+

The current Covid-19 pandemic has wreaked havoc on Sri Lanka’s economy. As a result, it is important that the country’s international trade tools and mechanisms adopt a response to the rapidly changing circumstances and needs.

One such mechanism is the European Union’s (EU) Generalised Scheme of Preferences Plus (GSP+), which Sri Lanka has been benefiting from since the current scheme was introduced in May 2017. The scheme aims to support Sri Lanka’s economic development through more trade with the EU, and contributes to diversify the country’s exports as well as to attract investment.

The scheme consists of the full removal of duties on 66% of tariff lines exported to the EU, covering a wide array of products including textiles and fisheries.

Sri Lanka being a developing country initially utilised a standard GSP scheme from the EU between 1971 and 2005. This is due to Sri Lanka becoming a beneficiary of the GSP+ scheme which aimed to give support to economically vulnerable, developing countries, under the condition that Sri Lanka commits to effectively implement 27 United Nations (UN) conventions on human rights, labour conditions, protection of the environment and good governance, and co-operate for regular monitoring.

However, in August 2010, Sri Lanka was suspended from the GSP+ scheme due to allegations of human rights abuse, which resulted in a loss of export revenue up until the scheme’s reinstatement in 2017. The current scheme was set to end in 2023 after the World Bank classified Sri Lanka as an upper middle-income country last year. However, in July 2020, the World Bank reclassified Sri Lanka as a lower middle-income country, ensuring the continued availability of the scheme.

“Since its inception, the GSP+ scheme has significantly contributed to enhance Sri Lanka’s overall exports to the EU by enhancing the price competitiveness of the GSP-eligible and utilised products. GSP+ concessions have been instrumental in diversifying our export basket over the years,” said Department of Commerce Acting Director General Ananda Dharmapriya, during a recent webinar titled “GSP+ for Enhanced Market Access”

The webinar was organised by the International Trade Centre (ITC) in collaboration with the Department of Commerce.

During the discussion, Dharmapriya stated that the country will push for high-level discussions with the EU Commission to resolve the existing issues of the “Country of Origin” criteria under the GSP+ scheme in order to support exporters to gain maximum benefit from the agreement.

In order to address the rules of the Country of Origin criteria, he stated that Sri Lanka’s apparel sector has submitted a joint request with Indonesia to the EU Commission for cross-regional cumulation for raw material originating from Indonesia.

“A high-level discussion with the EU Commission to get approval for this joint request of Sri Lanka and Indonesia on regional cumulation for apparel products is an important matter that will be attended to in the near future,” he added.

He stated that they also expect to make a formal submission to the EU Commission to source fabric from Vietnam, in the backdrop of its recently inked free trade agreement (FTA) with the EU.

According to Dharmapriya, the rules of origin was the key reason for the low utilisation of the GSP+ scheme over the years. He explained that despite an increase in exports to the EU following the reinstatement of the scheme in 2017, the country’s utilisation of it was only 62% in 2019.

“The low utilisation of the scheme is not due to lack of awareness, which is clear when you look at the average utilisation of GSP+ – 62% – and the sectoral utilisation, with apparel being 52%, rubber 96%, seafood 99%, processed food 96%, apparel accessories 77%, bicycle 96%, electrical 41%, head gear parts 87%, and tea and spices 70%. Considering these sectoral utilisations, can we say the apparel sector is unaware of GSP+?”

He stated that the local exporters are concentrating only on a few sectors due to the cost of compliance included in the Country of Origin criteria. This issue especially affects apparel exporters, with the utilisation of the scheme by the sector only being 52% as Sri Lanka’s apparel is made of fabric imported from outside the South Asian Association for Regional Co-operation (SAARC) and the EU region which are not eligible for the GSP+ concession. 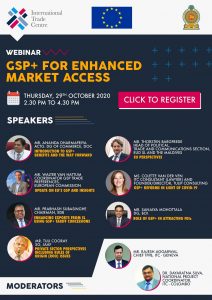 Furthermore, another reason he claimed was the cost of compliance involved with the Country of Origin criteria, which is far out from the tariff concessions.

Despite this, since its reinstatement, the value of Sri Lanka’s total exports to the EU market in 2018 recorded a growth of 5% compared to a year earlier, and as a result, the country’s GSP+-utilised exports recorded a year-on-year growth of 1% in 2018. In 2019, exports enjoyed $ 2.7 billion in GSP+ benefits, a 4% rise from the year prior.

Given this, Export Development Board (EDB) Chairman Prabhash Subasinghe asked local exporters to offer high-quality products and utilise ethical practices to make maximum use of the programme. During the webinar, he explained that this programme can be a catalyst to help related business sectors post Covid.

He stated that consumers in the EU are supportive of ethical and sustainable practices, and therefore there is a huge potential for local exporters to capitalise on this. He went on to state that these exporters can also pivot to related business areas based on opportunity and build the enterprises at its infancy stage, using the scheme as a leverage, and then continue to grow the businesses.

“Sri Lankan exporters and EU importers have a natural hedge, thanks to GSP+. Over 6,000 product lines are eligible from Sri Lanka for the GSP+ concession, creating a cost advantage to the European importers.”

According to Subasinghe, Sri Lankan exporters should also focus on Eastern European markets instead of only focusing on traditional Western European markets. Despite the EU having 27 countries, around 90% of the country’s exports to Europe are concentrated in western parts which include countries such as Germany, Italy, Belgium, the Netherlands, and France – each accounting for 19%, 15%, 11%, 10%, and 6%, respectively.

“While we continue our export promotions to the traditional markets in the EU, we also require stronger market access and presence in the eastern part’s economies, such as Poland, the Czech Republic, Hungary, Slovakia, and so on.”

He also stated that the increasing investments from the EU for export manufacturing for sectors such as high-tech apparel, personal protective equipment (PPE), electronic and electrical, rubber tyres, automobile parts, boat-building, value-added agriculture, and pharmaceuticals is key.

In order to increase Sri Lankan exports to the EU, the EDB has organised export promotions to new EU markets, introduced new small and medium-sized enterprises (SMEs) in the agri sector, provided financial assistance for internal promotional initiatives undertaken by the exporters to access, and promoted their products in the EU under the GSP+ scheme.

While the scheme was set to expire at the end of 2023, EU First Councillor and Head of Political, Trade, and Communications Section Thorsten Bargfrede stated that it will be available for Sri Lankan exporters until there is a reclassification of the country to an upper middle-income country. During the webinar, he also highlighted the importance of enhancing competitiveness and best practices post Covid, while complying with the regulations of the agreement to continue to benefit from the scheme.

“There are several ways to be competitive, which include quality, compliance with international regulations, and being investment-friendly, keeping the long-term vision in mind.”

Bargfrede stated that it was important for Sri Lanka to stay ahead of the competition, as regional players such as Bangladesh, Vietnam, and Cambodia were also benefiting from the scheme.

The current GSP+ scheme guide is available online in all three languages on the Department of Commerce website for local exporters to study.

All at sea in the ocean

May 30, 2021 byNews Admin No Comments
Sri Lanka has now experienced two major maritime incidents in the span of nine months, both of which have highlighted the inadequacy of preparedness and response mechanisms locally to deal with such f

July 15, 2019 bythemorninglk No Comments
Fonterra is leading the way as the first dairy company globally to implement a system that can electronically trace its products anywhere in the world within minutes.