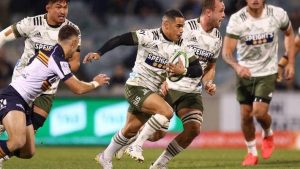 Aaron Smith (with ball) scored twice for Highlanders against the Brumbies

Hurricanes ended their season with a thrilling win over Reds by 43-14 in Wellington. The hosts got in the board through Ngani Laumape’s try but Tate McDermott’s try levelled the contest moments later. After quiet first half, Jordie Barrett’s penalty gave the Hurricanes a 10-7 lead at half-time.

Second half started off with a try for the hosts through Ruben Love. Reds forward Brandon Paenga-Amosa powered over for a try which was the last time they managed to score in the game. Minutes later, Dane Cole’s try began the Hurricanes’ late surge.

Laumape was awarded a penalty try after Bryce Hegarty was shown yellow after he was caught deliberately hitting the ball over the line to prevent a score. Try from Devan Flanders and a second try from Coles in the final ten minutes confirmed the win for the hosts.

The Highlanders did the best they could to securing a Super Rugby Trans-Tasman play-off spot after beating the Brumbies 33-12 in Canberra.

The first points came when Brumbies flanker Rob Valetini broke straight through and shifted the ball to the right where Len Ikitau went on to score. But the visitors responded within minutes through a rolling maul leading to a try for Ash Dixon.

Highlanders found try number-two through Jona Nareki who burst through and offloaded to Aaron Smith for the score. Brumbies responded through driving maul which saw  Lachlan Lonergan crashing over the line.

Aaron Smith scored his second, seven minutes into the second half. Ten minutes later, the Highlanders’ fourth try came through Billy Harmon from a 5-metre line-out. The visitors put the icing on the cake as Patelesio Tomkinson crashed over the line for the fifth try of the night.

The Crusaders secured a big 52-26 victory over the Rebels in Melbourne on Saturday but it wasn’t enough for them to secure a place in the Super Rugby Trans-Tasman final. Crusaders took only three minutes to open their account with Mitchell Drummond beating Jordan Uelese at close range to score. Moments later, Richie Mo’unga burst straight through and offloaded to Will Jordan for the second try.

Rebels struck back via Trevor Hosea, who barged over the line following a few phases inside the Crusaders’ half. Try number-three and four came in quick succession for the Crusaders through Leicester Fainga’anuku and Sevu Reece. However, Rebels finished the first half with their second try via a solo effort from Joe Powell, who sold a dummy to get past George Bower before beating Mataele and Reece to the line.

Crusaders found their fifth after the break when Reece touched down in the corner for his second. Rebels responded with their third try in the 56th minute when centre Glen Vaihu crossed over. Crusaders hit back almost immediately when Reece caught the defence napping with a quick tap before crashing over for his hat-trick. The game was gone but Rebels found a conciliation try before the hooter through Frank Lomani.

The Blues held off a late surge from the Western Force at Eden Park to clinch a 31-21 victory and booked their place in the Super Rugby Trans-Tasman final.

Blues opened the scoring with Hoskins Sotutu breaking the defence and racing over try line. Force showed resilience but Blues eventually regained control  with their second try when Telea sprinted over in the corner after Zarn Sullivan sent a long pass out wide.

The kiwis found their third try moments later after Rieko Ioane broke through and offloaded to Dalton Papalii who touched down under the posts. Blues struck again on the stroke of half-time, Hoskins Sotutu scored his second which made it 28-0 to the hosts at lemons.

Force eventually opened their account in the 49th minute, Feleti Kaitu’u crossing the whitewash after a maul. Lifted after the try, Force pushed on and scored their second try through Tevita Kuridrani who crashed over the line. The Blues managed to settle their nerves as Otere Black converted a penalty in front of the posts.

Few minutes later, the Blues managed to add another try through Telea, only for the Television Match Official (TMO) to overturn it after substitute Ray Niuia was caught for foul play in the build-up, earning a yellow card in the process. Force reduced the deficit to just ten points with a few minutes remaining when Rob Kearney touched down. But it proved too little, too late for the Force as the Blues held on until the final whistle.

The Chiefs ended their season on a high after beating NSW Waratahs 40-7 on Saturday (12). Chiefs opened the scoring early in the game through a try from Sean Wainui. He scored his double few moments later after a fabulous phase of play from the Chiefs. Bryn Gatland converted both tries.

Minutes away from half time, Lachlan Boshier was shown a yellow card which put Chiefs down to 14. Waratahs pounced on the advantage and Mark Nawaqanitawase found the whitewash to open the scoring.

The second half started with two tries from Wainui, completing his hat-trick for the night for the Chiefs. Waratahs contained the onslaught for some time but Chiefs finally broke through for their fifth try through Tom Florence. Matters got worse for the Aussie side when Lachlan Swinton was shown the red card. With 14- men, Waratahs struggled to defend and that opened up more opportunities which led one more try from Wainui, who made it five for the night.