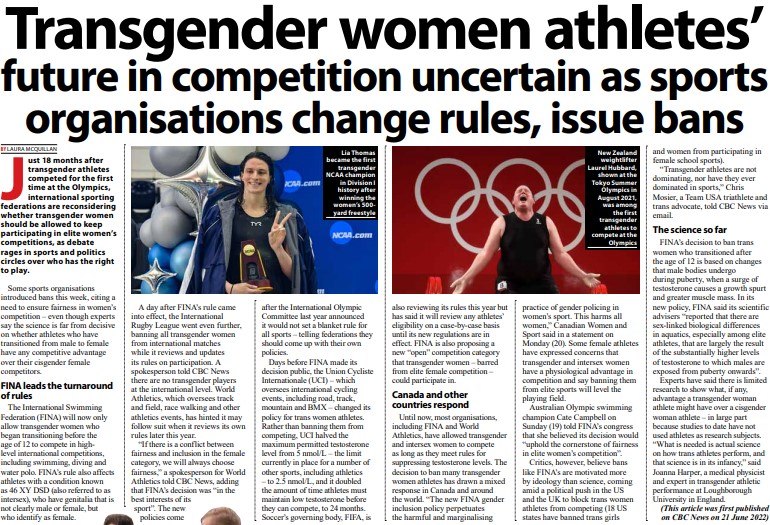 Just 18 months after transgender athletes competed for the first time at the Olympics, international sporting federations are reconsidering whether transgender women should be allowed to keep participating in elite women’s competitions, as debate rages in sports and politics circles over who has the right to play.

Some sports organisations introduced bans this week, citing a need to ensure fairness in women’s competition – even though experts say the science is far from decisive on whether athletes who have transitioned from male to female have any competitive advantage over their cisgender female competitors.

FINA leads the turnaround of rules

The International Swimming Federation (FINA) will now only allow transgender women who began transitioning before the age of 12 to compete in high-level international competitions, including swimming, diving and water polo. FINA’s rule also affects athletes with a condition known as 46 XY DSD (also referred to as intersex), who have genitalia that is not clearly male or female, but who identify as female.

A day after FINA’s rule came into effect, the International Rugby League went even further, banning all transgender women from international matches while it reviews and updates its rules on participation. A spokesperson told CBC News there are no transgender players at the international level. World Athletics, which oversees track and field, race walking and other athletics events, has hinted it may follow suit when it reviews its own rules later this year.

“If there is a conflict between fairness and inclusion in the female category, we will always choose fairness,” a spokesperson for World Athletics told CBC News, adding that FINA’s decision was “in the best interests of its sport”. The new policies come after the International Olympic Committee last year announced it would not set a blanket rule for all sports – telling federations they should come up with their own policies.

Days before FINA made its decision public, the Union Cycliste Internationale (UCI) – which oversees international cycling events, including road, track, mountain and BMX – changed its policy for trans women athletes. Rather than banning them from competing, UCI halved the maximum permitted testosterone level from 5 nmol/L – the limit currently in place for a number of other sports, including athletics – to 2.5 nmol/L, and it doubled the amount of time athletes must maintain low testosterone before they can compete, to 24 months.

Soccer’s governing body, FIFA, is also reviewing its rules this year but has said it will review any athletes’ eligibility on a case-by-case basis until its new regulations are in effect. FINA is also proposing a new “open” competition category that transgender women – barred from elite female competition – could participate in.

Canada and other countries respond

Until now, most organisations, including FINA and World Athletics, have allowed transgender and intersex women to compete as long as they meet rules for suppressing testosterone levels. The decision to ban many transgender women athletes has drawn a mixed response in Canada and around the world.

“The new FINA gender inclusion policy perpetuates the harmful and marginalising practice of gender policing in women’s sport. This harms all women,” Canadian Women and Sport said in a statement on Monday (20). Some female athletes have expressed concerns that transgender and intersex women have a physiological advantage in competition and say banning them from elite sports will level the playing field.

Australian Olympic swimming champion Cate Campbell on Sunday (19) told FINA’s congress that she believed its decision would “uphold the cornerstone of fairness in elite women’s competition”.

Critics, however, believe bans like FINA’s are motivated more by ideology than science, coming amid a political push in the US and the UK to block trans women athletes from competing (18 US states have banned trans girls and women from participating in female school sports).

“Transgender athletes are not dominating, nor have they ever dominated in sports,” Chris Mosier, a Team USA triathlete and trans advocate, told CBC News via email.

The science so far

FINA’s decision to ban trans women who transitioned after the age of 12 is based on changes that male bodies undergo during puberty, when a surge of testosterone causes a growth spurt and greater muscle mass. In its new policy, FINA said its scientific advisers “reported that there are sex-linked biological differences in aquatics, especially among elite athletes, that are largely the result of the substantially higher levels of testosterone to which males are exposed from puberty onwards”.

Experts have said there is limited research to show what, if any, advantage a transgender woman athlete might have over a cisgender woman athlete – in large part because studies to date have not used athletes as research subjects. “What is needed is actual science on how trans athletes perform, and that science is in its infancy,” said Joanna Harper, a medical physicist and expert in transgender athletic performance at Loughborough University in England.

May 17, 2021 byRevatha No Comments
Major international sports news on Saturday