Trash the size of an elephant: Lalith Senanayake uses art to spread an important message

January 1, 2021 by Nethmi Liyanapathirana No Comments

Art is a very effective method of self-expression. Lalith Senanayake, an immensely talented sculptor from Wattala, uses his art to spread a message that needs to be heard by all residents of our planet: Stop plastic pollution.

Senanayake excels in the field of sculpting and is specialised in metalwork. He used to work as a political cartoonist for a newspaper for 20 years before he began focusing on his talent. He taught himself sculpting with the help of former University of Visual and Performing Arts Vice Chancellor Prof. Sarath Chandrajeewa and eased his way into clay sculpting. 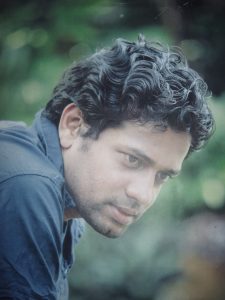 It all began at a garage

Speaking to The Morning Brunch, Senanayake shared his journey into metal sculpting. He told us that back in 2009, the Professor’s house had a garage with a lot of scrap metal, so he began inculcating the scraps into his sculpting, and thus his first scrap metal sculpture was born.

He displayed this sculpture at an exhibition that was visited by renowned architect C. Anjalendran who adored the sculpture. He identified Senanayake’s gift and advised him to continue with sculpting.

Elephant in the room

Recently, Senanayake took part in a large project where he created a jumbo elephant out of the plastic waste that washed up at the beach. He has always had a liking towards sculpting animals and birds, so he settled on an elephant for this sculpture.

“I took my wife and my two kids to the Uswetaekiyawa beach during the first wave of the pandemic. The beach looked nothing like it used to years ago; it was polluted and no one could come and relax on the shore anymore.”

He shared that they usually visit the beach every weekend, and they see discarded ice cream wrappers, plastic bottles, bags, and other waste. They had then planned to start an organisation to prevent this pollution, but that idea fell through. Instead, they picked up all the plastic waste on the beach and took it home.

“There were so many bags of waste. We didn’t know what to do with it. Then we thought, since we make sculptures out of metal, why not try out of plastic. So I had the idea to infuse the plastic into a metal sculpture.”

Senanayake has taken part in many environmental awareness programmes, both in Sri Lanka and abroad, so he applied the knowledge he garnered from these events to build this sculpture.

He and his wife plan to use all they learned to start an initiative against plastic use next year. They hope they can encourage people to recycle or reduce their plastic consumption. The family is also on a journey towards zero-waste – to live a more sustainable and eco-conscious life.

They began sorting through the waste to find which bits they could use and which were unusable. He told us the sculpture took over three months to make, but due to the lockdowns that happened, they had time to give their complete attention to their piece. The two little ones too have had fun helping their parents spin their magic and bring life to this magnificent work of art, he said. They were very effective in using the pandemic for some healthy family bonding time, instead of focusing on the negative aspects.

They picked an elephant to sculpt because they thought it would appeal to kids; they wanted to educate kids on plastic waste and show them that by polluting, they are endangering these majestic animals. “I wanted to highlight the fact that we collected trash the size of an elephant, so they would understand the significance.”

They displayed it at the beach in hopes that kids will look at the sculpture and think “that could be my plastic bottle”, so they would understand that they shouldn’t just be discarding their waste anywhere. 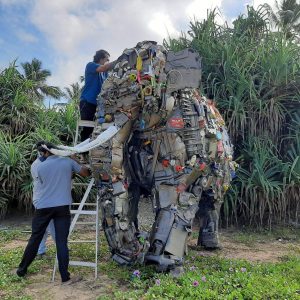 Senanayake explained the challenges they had to overcome to create this piece of work: “The plastic wasn’t as easy to stick to the metal as I thought it would be, so we had to find alternate ways to attach them. We thought about melting the plastic to attach it, but quickly realised that the fumes from burning plastic are harmful to the environment, and people living around. Instead, we attached it with various other means.” He added that plastic isn’t as malleable as metal or clay, so they had to work with its original form.

Their efforts have been successful, as this sculpture is being talked about everywhere, and the message to protect our environment has been taken seriously. Senanayake noted that the waste on the beach has actually significantly reduced. The elephant can be seen standing tall at the Uswetakeiyawa beach, behind Hotel Club House.

Apart from this jumbo elephant, Senanayake has also created many other metal sculptures. They source the metal from scraps they have at home, and depending on the requirements of the artwork, they buy metal from metal manufacturing companies.

He told us that since many people know he is in this business, they drop off their metal scraps at his house too. Not only are his pieces breathtakingly beautiful, but they also help reduce a lot of waste. One man’s trash is another man’s treasure, after all.

His sculptures are mostly sold to foreign countries, but right now, they are not importing any due to the restrictions caused by the pandemic. Even though most of his sculptures are not in the country, you can still see two of his famous ones near the Gangarama Temple, so next time you’re in the area, keep an eye out for these beauties!

A false sense of security?: What does being vaccinated really mean day-to-day?

March 14, 2021 byNews Admin No Comments
Last March at this time, Covid-19 was still an “overseas issue”. A year later, we’ve survived one tumultuous year of lockdowns and adjusting to the new normal. This March, the big topic is vaccines..