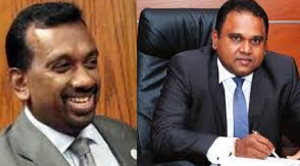 The Director General of the Commission to Investigate Allegations of Bribery or Corruption (CIABOC) had filed indictments against former Sports Minister Mahindananda Aluthgamage and former Sathosa chairman Nalin Fernando for allegedly committing a Rs. 53.1 million fraud while importing sports equipment during last the Presidential Election (2015).

The case was filed on 27 June with the second Permanent High Court at Bar in Colombo.

CIABOC filed this case against the two accused under section 70 of the Bribery Act on six counts.

August 5, 2020 byTSM Web Desk No Comments
Over 2,000 people will lose the opportunity to vote at today’s (5) parliamentary election due to the Covid-19 pandemic, as they are still undergoing the quarantine process at 33 quarantine facilities

October 13, 2020 bythemorningeditor1 liberty No Comments
The Free Trade Zones and General Services Employees’ Union (FTZ & GSEU) has urged the Government to hold an independent inquiry into the present outbreak of Covid-19 at the Brandix factory in Minuwang