Ruwantha Dhananjaya is just 21 years old, and yet he has done more travelling than most of us I’m sure. After the first lockdown, Ruwantha seized the opportunity, when tourism was non-existent and hotels were offering great deals, to embark on an adventure around Sri Lanka. For eight days, he wandered our island, with barely any money in hand, giving hope to every budget traveller out there.

At the time, he was not employed, so one day, he was chilling in his room when a thought struck him; he realised that life is too short, and with the pandemic, spirits certainly were not soaring high, so he took the risk and decided to tour Sri Lanka on his own. He informed us that he had previously worked at Pizza Hut for a while, and had saved all the money he earned – a mere Rs. 35,000 – but he was willing to spend it on his adventure. “I saved that money for future investments but travelling the world was always my dream. I thought to myself: Why not? And the next day I packed my bag and hit the road,” said Ruwantha.

Now, to most of you, travelling throughout Sri Lanka with only Rs. 35,000 in hand may seem ridiculously impossible, but as someone who swears by budget travelling, I can assure you, it’s possible. It is not easy, nor is it comfortable or luxurious, but the cheaper the trip, the higher the risk, and ultimately, the reward.

Ruwantha confirmed this by saying he faced many challenges on his journey. He journeyed mostly through buses, trains, and tuks. When money was tight, he had to resort to hitchhiking, which was an experience in itself. “Because I was only 20 years old at the time, hitchhiking was scary because anything could have happened to me. It’s a blessing that I don’t look that young. I managed to lie about my age and say I’m 24, so people wouldn’t ask too many intrusive questions.” 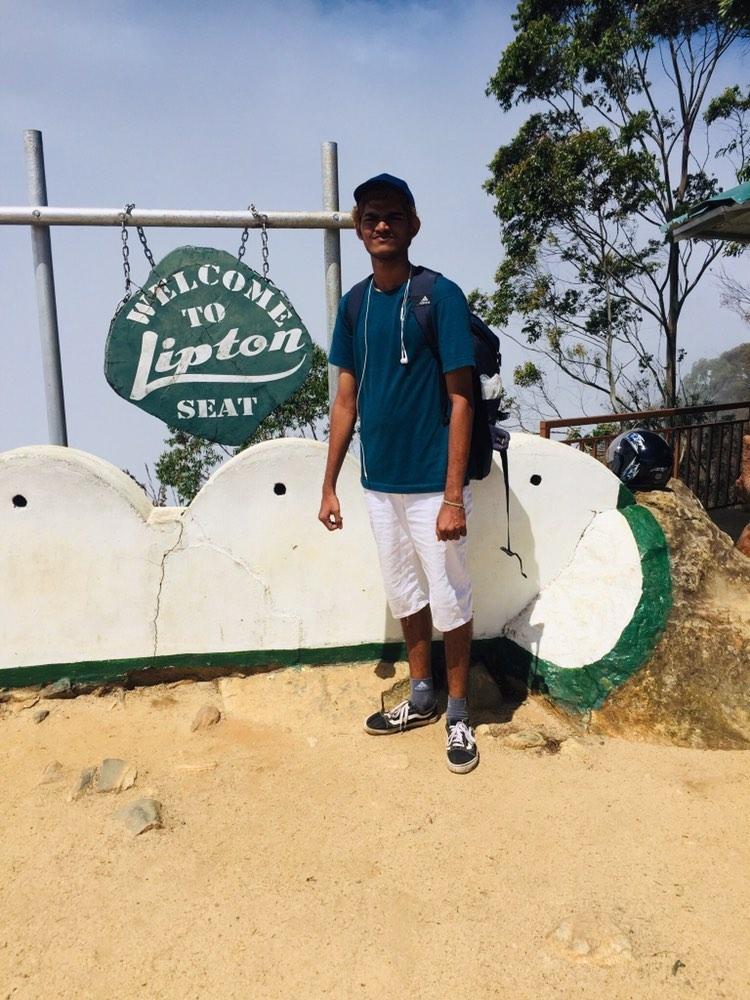 His journey began from the South of Sri Lanka where he visited Galle, Mirissa, Weligama, and a few more coastal hotspots. After that, he made his way to the central area of Sri Lanka, hitting the majestic Hill Country, Horton Plains, and exploring the cold climate. Next up was the eastern coast of Sri Lanka. Journeying through Ella and Badulla, he reached Arugam Bay, where he observed that there were more tourists there than in the South.

Eventually, after eight long days, he made his way back home. Talking about why he hopped on this adventure, he said: “My goal was never to visit Instagram hotspots, I just wanted to see some beautiful sunsets and connect with nature along the way.” He even named his most memorable experience to be the night he had to sleep in a temple near Horton Plains because he couldn’t find accommodation for the night. Describing the temple as “beautiful and spiritual”, he noted it as his favourite moment of the trip.

Even as a budget traveller myself, it seemed almost too good to be true that he made do with such a little money; accommodation does not come cheap in Sri Lanka. To iron out our confusion, Ruwantha informed us that since tourism was down, hotels and rooms were going at crazily cheap rates: “The most I spent for a room was Rs. 2,000 because I wanted a luxurious experience. This was in Mirissa and the villa I stayed at came with an amazing ocean view and all the amenities I could ask for. For someone like me, who travels on a small budget, this pandemic had a silver lining.”

Giving us an overall insight to his trip, he commented: “The trip was life-changing. Throughout the whole journey, my only goal was to live in the moment as much as I could, and get the best out of every experience that came my way.”

May 21, 2020 byJennifer Anandanayagam No Comments
It seems the coronavirus pandemic has caused most to be making the best out of a bad situation and joining the bandwagon are newlyweds Michelle and John Senyard from San Francisco, California.

September 9, 2020 bythemorningeditor1 liberty No Comments
This week, we reached out to Shifani Reffai, the Co-Founder of WhiteNoise Media, Co-Creator of Shhh – The Talkshow, musician, content creator, and the creator and protagonist of the hilarious IGTV vid